As CMO of Mcor, a paper based 3D printing company, I have often written about the merits of paper as a material for 3D printing as many people are utterly surprised by the <a href="http://www.eurekamagazine.co.uk/design-engineering-blogs/guest-blog-it-is-paper-jim-but-not-as-we-know-it/146878/">strength and resistance of paper.</a>

But one of the other important features of a 3D printer is the ability to print accurate parts. The dimensional accuracy of a component part represents the degree of conformity between the manufactured dimension and its designed specification.We were recently contacted by one of our customers in Croatia, Slavonski Brod, J.J. Strossmayer University in Osijek. One of their students, Matej Mandić, studying for his Master’s Degree in Mechanical Engineering, Product design and Development conducted some research on the accuracy of paper 3D printed parts to the original STL model.

The main objective of this research was to determine the deviations and evaluate the dimensional accuracy of 3D printed camera casing models (see images) compared to the original models in the STL format. The study sample consisted of the 3D printed camera casing models and the same models in the STL format. The models were 3D printed on Mcor IRIS and then scanned with an ATOS 3D scanner. A comparison between the scanned and original STL models was made in GOM Inspect software. 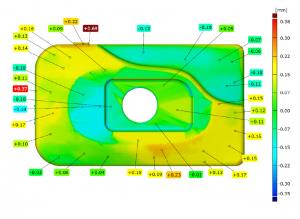 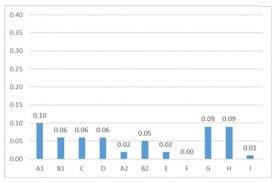 In fact, the results obtained in this research confirmed that the paper‐based model has very satisfactory accuracy, with the average deviation within only tenths of millimetres. Such low deviations confirm the accuracy of the Mcor IRIS.

Selected long shell models enabled special observation of accuracy in the Z direction. It was thought that the Z direction in long thin models might be more affected by cutting force, humidity, gluing and post‐processing. However, 3D scanning results did not reveal significant concave nor convex deviations in Z direction, thus confirming that layering of paper really does successfully withstand the 3D printing process and delivers sufficient rigidity.

In addition, because two camera parts were printed for this research the student was able to test mating and relative insertion of parts and it turns out the results verify the accurate assembling capabilities of paper based 3D printing technology, particularly of value to design engineers.

So there you go more reasons not to underestimate paper based 3D printing technology – it is low cost, strong, has more colours than the rest and it’s accurate!

GUEST BLOG: What is full colour 3D printing and why does it matter?