In the first of a series of pieces from speakers at this summer’s Additive International summit (Nottingham, 13-14 July) Professor Martin Wegener from Germany’s Karlsruhe Institute of Technology (KIT) discusses recent advances in micrometer and nanometer scale 3D printing.

Throughout the last decade, a plethora of different commercially available 3D printers has hit the scientific and industrial market. When looking for printable feature or voxel sizes in the low micrometer and sub-micrometer range, optics-based approaches take the lead, especially two-photon absorption based 3D laser printing. By using this second-order type optical nonlinearity, the excitation can be sufficiently concentrated along all three dimensions, which is not possible by absorption of just one photon [1].

Under usual circumstances, the simultaneous absorption of two photons by a molecule is ridiculously improbable. Only by using tightly focused femtosecond laser pulses, the probability of this process to occur becomes remotely similar to that of absorbing just one photon. A small number of companies selling two-photon based 3D laser printers entertains a clientele of more than thousand customers worldwide – so far mainly in academia, but with an increasing fraction in industry.

So what is wrong with that? The necessary femtosecond laser alone costs several tens of thousands of Euro and takes up the biggest fraction of the volume of the overall instrument. Moreover, when run over several years, femtosecond lasers tend to have reliability issues. Finally, the point of obtaining unwanted micro-explosions inside of the resin is often not too far away from the laser power needed for the printing, i.e., polymerization of the material. Such criticality is unwanted for robust industrial processes.

One would really like to do the same sort of 3D printing, but with compact low-power continuous-wave semiconductor laser diodes, like the ones used in any blue-ray disk reader, a computer mouse, or a hand-held laser pointer. Still, a photo-switch, a molecule, is needed that only starts the chemical reaction locally after absorption of two photons – and not after absorption of only a single photon. Can we do this?

Yes. We have nicknamed such process two-step absorption. Here, the two photons are not absorbed simultaneously, but rather sequentially. This becomes possible by introducing a sufficiently long-lived intermediate or idle state of the molecule: The absorption of a first photon brings an electron from the ground state of the molecule to this idle state. Ideally, nothing happens. The absorption of a second photon brings the electron from the idle state to a higher-energy excited state, from where the chemical reaction starts. 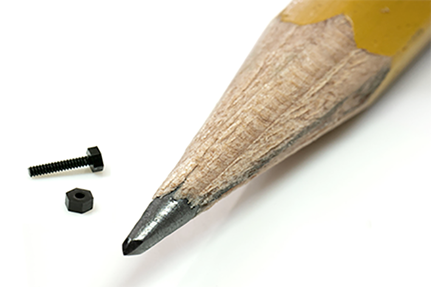 It seems unlikely though that two-step absorption will completely replace two-photon absorption in the near future. Two-photon absorption still has its advantages when it comes to the highest printing speeds. However, we foresee a bright future for one-color two-step absorption for low-cost shoe-box-size 3D printers giving access to the deep-µm and nanometer scale. The 3D Additive Manufacturing community speaks about democratization of the technology. A corresponding collaborative transfer project with the world-market leader for two-photon 3D printers, Nanoscribe – BICO company, has started in early 2022.

The second variant in which two-step absorption can be used to our advantage is what we refer to as two-color two-step 3D laser printing. In the conference talk, we will present corresponding currently unpublished material.

To hear more from Prof Wegener – as well as a host of other speakers from the leading edge of 3D printing research –register now for this year's Additive International Conference, which runs from July 13-14, at Nottingham’s Albert Hall Conference Centre.

The future of 3D printing in education