LumiBee is a unique mini 3D resin printer that uses a smartphone as a light source to polymerise the resin. The project is free for everyone who wants to create their own device at home. To create it, all you need is an LPD printer. The LumiBee prototype was created on the Zortrax M200 3D printer.

The LumiBee is a unique compact 3D printer that uses photosensitive liquid resin. It has been designed so that 95% of its parts can be printed with a desktop LPD 3D printer. The LumiBee also stands out because it uses the screen of a mobile phone, inserted inside, to transform daylight liquid resin into a three-dimensional object. Daylight resin for 3D printing allows most smartphones to be used as a light source to solidify the resin. This allows the company to give a second life to slightly outdated cell phones.

The team at Lumi Industries started working on portable 3D printers in 2013 with LumiFold. Two years later a company interested in having a portable solution for doctors and dentists in developing countries approached it. The idea was for them to be able to travel with the 3D printer in their suitcase, thereby allowing them to help their patients by fabricating 3D parts on the spot. Later the company stepped back and decided to (slowly) take this idea to the stage of a working prototype, as a side project. 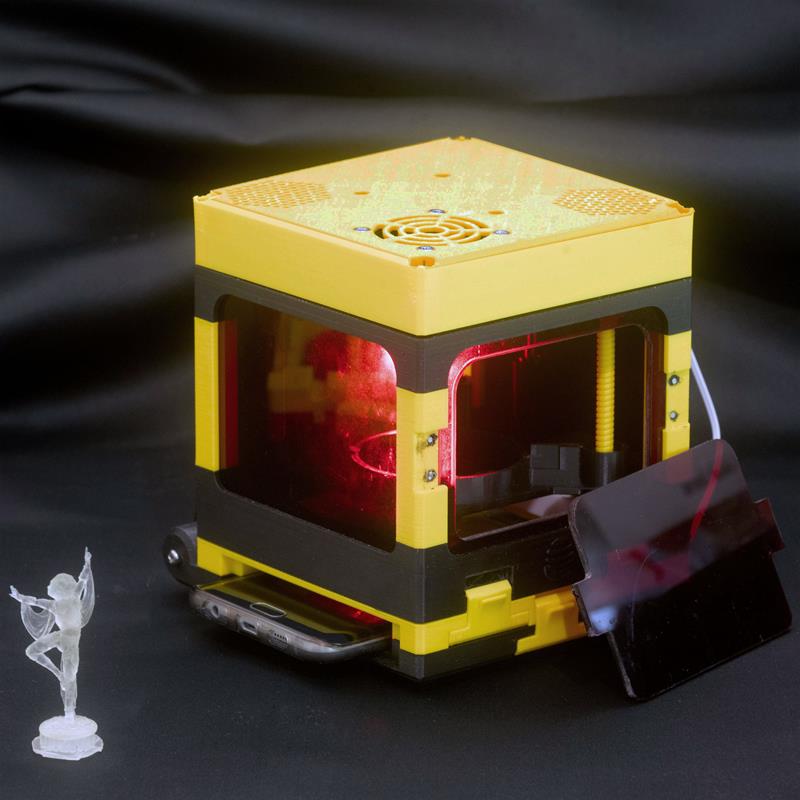 In 2015 Lumi Industries patented the idea of an innovative mechanical system to make a 3D printer thinner than its printing volume. In 2018, it presented the New LumiFold TB prototype, an ultra-compact 3D printer, based on its patent solution, working with an iPad 3 mini and Photocentric daylight resins. This prototype has been showcased in several international fairs and expos receiving a lot of interest and it is currently waiting for partners or sponsors to be further developed. Importantly, though, the expertise gained in daylight resin 3D printing led directly to the LumiBee Project.

The goal of the LumiBee project is to use the experience the company gained in portable 3D printers and daylight resins, but with a much more affordable solution. Says Davide Marin, Lumi Industries CEO: “We realised that making a commercial product using smartphones as light sources was not feasible, but beside the expertise in portable 3D printers, we spent a considerable amount of time designing and testing phone-based resin solutions, so why keep all of it closed in a drawer?” Davide brought the LumiBee design to a refined working prototype and it was decided to release everything as open source. 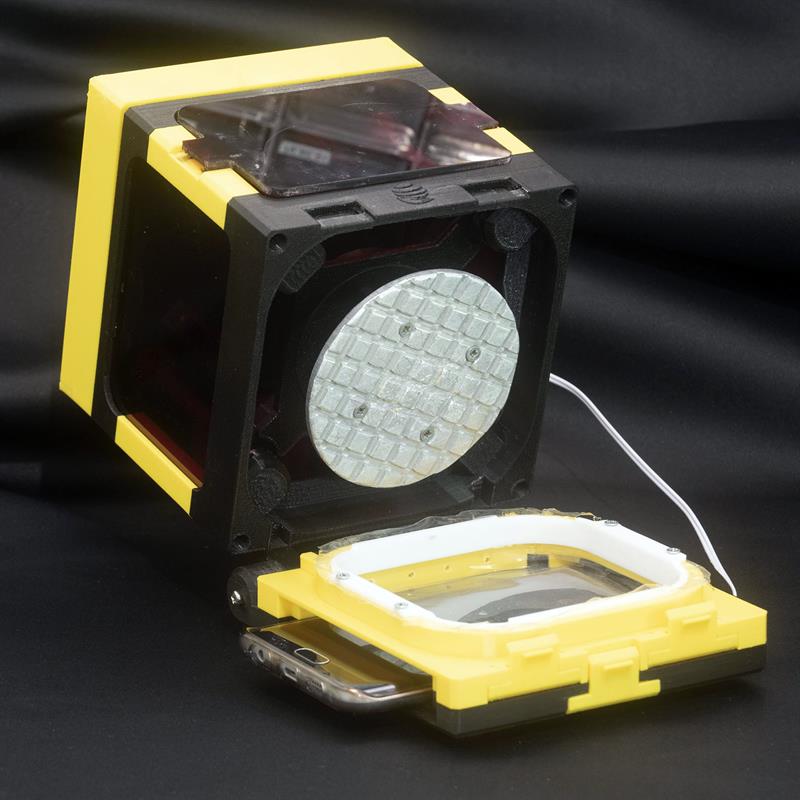 In the recent years he has continued to work on LumiBee on a personal level. He developed the mechanical design, PCB design, firmware and mobile App. When it came to prototyping, he had the idea of designing all the resin 3D Printer parts to be 3D printable with a domestic FFF printer, so people could recreate the LumiBee at home at a very low cost.

“I made LumiBee as a personal project,” says Marin. “I developed mechanical design, PCB design, prototyping, firmware and App. I made first prototypes for the chassis using the FFF 3D printer we have in house, a Zortrax M200 and Z-ULTRAT filament. M200 provided us with everything we needed. The quality was good enough even to print threaded bars and nuts for LumiBee Z-axis. An idea popped into my mind: LumiBee parts should be designed in a way that any user can 3D print them at home with a domestic FFF printer at a very low cost. I decided with my team to release LumiBee as free Open Source project by Lumi Industries, perfectly matching our mission to make 3D printing benefits available to a larger public.”

The LumiBee chassis design was split into segments, with specific functions: holding 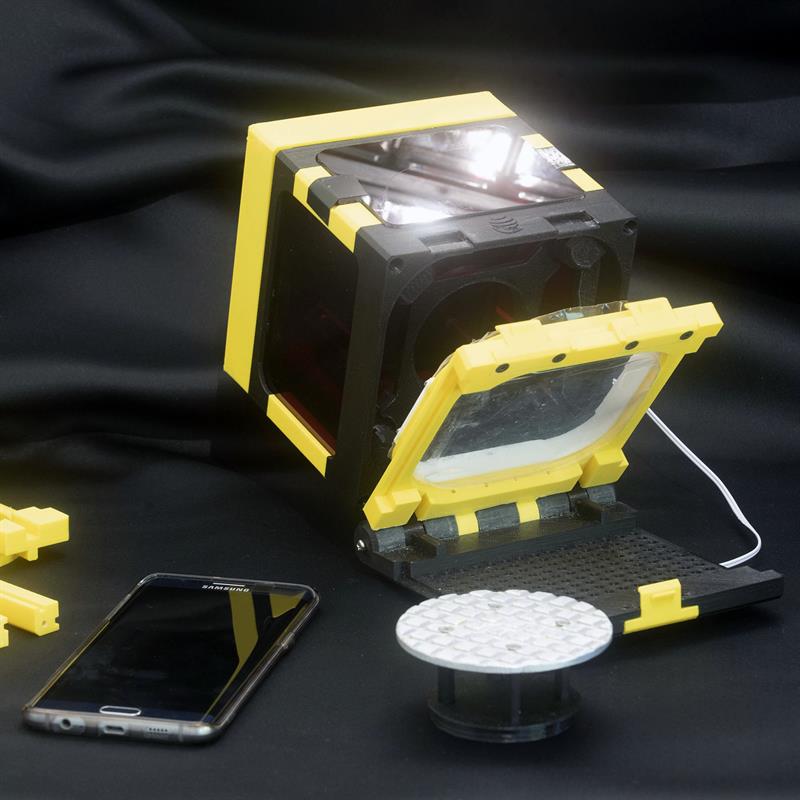 the phone, housing the PCB board, etc., and they can be customised or replaced easily. During the prototyping process, each segment was printed in a different colour to highlight this feature. The name LumiBee is not an accident. At the prototyping stage, the studio had two filament colours available: black and yellow. The finished device resembled a bee, and this resemblance went way beyond appearance.

“In nature, this tiny animal has such an important role in our lives. It contributes to complex, interconnected ecosystems and we felt this reflected also the idea of the project itself involving different players like makers, 3D printing lovers and fans, as well as different companies to cooperate for the good and, if possible even improved, outcome of the project,” says Marin.

Partners of the project are Photocentric, which provides suitable daylight resins; Zortrax, creator of the printer on which LumiBee was printed; and 3D Filium, which suggested particular filaments, such as its non-flammable PlaQ FRVO, which is perfect for extra safety when embedding electronic components. 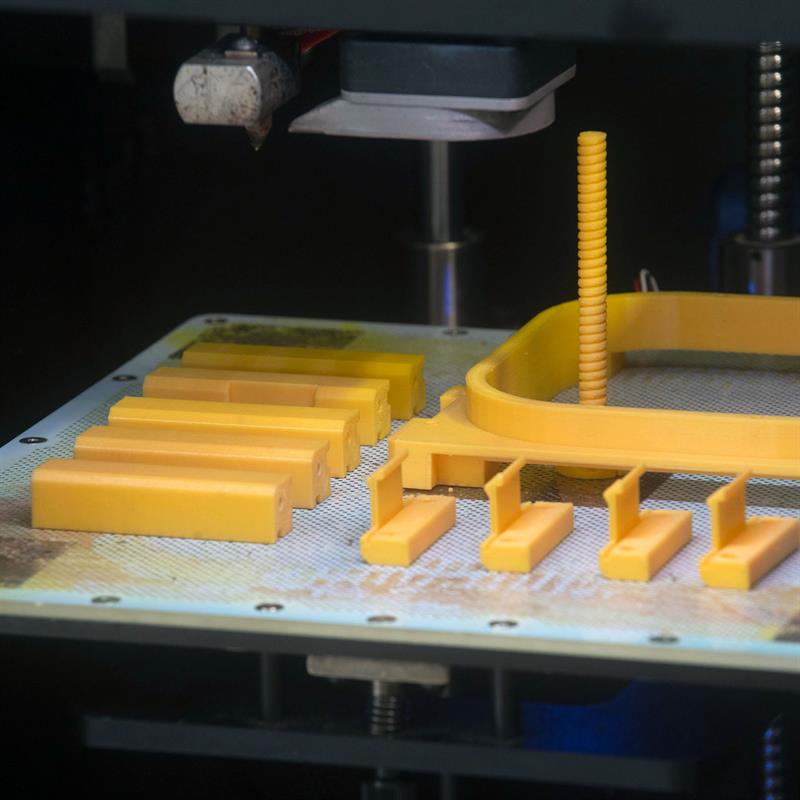 “We are glad that users of Zortrax printers use our equipment for creative projects and share their solutions with the tech enthusiast community. The ability to create your own devices, modify and improve them is one of the most important things 3D printing brings to the table. We are excited to see how people will transform and modify LumiBee in the future,” said Rafał Tomasiak, CEO of Zortrax.

The LumiBee open source project looks simple but hides some smart solutions. For example, LumiBee communicates easily with any smartphone in the market. Every smartphone has a built-in flash for the rear camera, and accessing it is easy in Android studio. Communication protocol was reduced to the bare minimum, using a quick blink of the smartphone flash to say “go up 1 layer in the Z-axis” to LumiBee and two quick blinks to communicate“print is finished, put the tray completely out of the resin”.

LumiBee was a finalist in 2019 edition of the Purmundus challenge at FormNext, Frankfurt. The M200 3D printer model used to create the LumiBee is the predecessor of the Zortrax product - the M200 Plus 3D printer.

Choosing the right 3D printer for you