Given the level of attention it has received in recent years, one could be forgiven for thinking that 3D printing is the only realistic means by which it is possible to manufacture certain complex patterns without the use of more conventional subtractive machining.

However, this overlooks the existence of a process that long pre-dates 3D printing – chemical etching. Chemical etching is a sheet metal machining process that is used to manufacture complex components with high levels of accuracy. The process works by printing the component design onto a photo-resist which is laminated onto the metal. The areas of photo-resist which have not been printed are removed, exposing the metal, which is subsequently etched away.

Etching can be applied to almost any metal, regardless of grade or temper. Typical materials include steel and stainless steels, nickel and nickel alloys, copper and copper alloys, aluminium and hard to machine metals, including highly corrosive-resistant metals such as titanium and its alloys.

When compared with conventional sheet metalworking, it has a number of inherent advantages, key among which are its ability to produce parts without degrading material properties – no force or heat is used during processing – and almost limitless part complexity as component features are removed simultaneously using etchant chemistries.

The tooling for etching is digital, so there is no need to start cutting expensive and difficult to adapt steel moulds. This means that large quantities of products can be reproduced with absolutely zero tool wear, ensuring that the first and millionth part produced are exactly the same.

In addition, digital tooling can be adapted and changed extremely quickly and economically (often within an hour), making it ideally suited to both prototype and high-volume production runs. This allows for ‘risk-free’ design optimisation without financial penalty. Turnaround time is estimated to be 90% quicker than for stamped parts, stamping also requires substantial upfront investment in mould fabrication.

The economy and adaptability of photo-etch tooling is a key stimulus to design freedom, along with its ability to produce complicated products. As the cost of creating prototypes is low there is no barrier to entry, and complex designs can be produced in a matter of days.

With metal removed simultaneously when etched, multiple aperture geometries can be incorporated without incurring high tool or processing costs, and where punch-perforated sheets are prone to distortion, photo-etched mesh is burr and stress-free with zero material degradation.

Given the size of the mesh, more than 600mm x 600mm square, stamping was seen to be uneconomical due to the investment required in press tooling, and laser cutting could not achieve the required tolerances, especially over such a large surface area, and also produced undesirable burring around each mesh opening.

Another benefit of etched stainless-steel mesh is that the process does not alter the surface finish of the material – no metal-to-metal contact or heat source is used which can mar the surface – offering a highly aesthetic finish. For instance, automotive speaker grilles with complex hole arrays and surface engraving are supplied by Precision Micro to automotive OEMs in quantities of multiple millions each year, the tooling too complicated for stamping and the mesh pattern too complex to laser cut.

Unlike laser cutting, etching can also produce very accurate engraved features at the same time the material is being profiled, such as fluidic channels, countersinks and logos. This is one of the key benefits of etching – increased complexity does not mean increased cost. 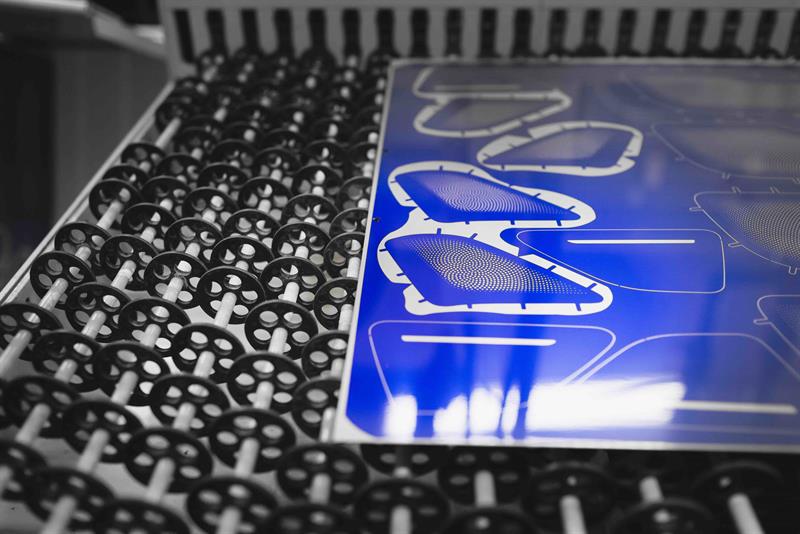 Often used in safety-critical or extreme environment applications – such as ABS braking systems, medical biosensors, and fuel injection systems – etched flexures have the ability to ‘flex’ millions of times faultlessly as the process does not alter the fatigue strength of the steel.

Environments rarely come more extreme than space and this is why Thales Cryogenics, a leading manufacturer of specialised cryogenic equipment, partnered with Precision Micro for the manufacture of stainless-steel flexures used in its satellite cryogenic cooler.

Initially, Thales considered machining and wiring for its flexures before turning to chemical etching, but both processes were seen to leave small burrs and recast layers on the parts which would have compromised spring performance.

The complex grooves machined into the surface of these plates – which are subsequently stacked and bonded to create captive channels – are well suited to chemical etching as they can be machined onto both sides in a single process.

While CNC machining and stamping can be used to machine and profile these channels, they can compromise flatness and introduce stresses and burrs. Presswork tooling can also be slow and uneconomic to produce, slowing down and adding cost to development timelines.