There are big discrepancies in the reporting of how technology and automation will affect our futures, especially around jobs. The mainstream media tends to publish headlines that warn of automation taking jobs from humans, whereas technologists are more evangelical about the future.

“Maybe the truth lies somewhere in between,” Autodesk's CEO, Andrew Anagnost, said at Autodesk University in Las Vegas in November. “Because, although technology can be a positive force, there are forces pulling us in other directions. On the one hand, we know that a growing population is inevitable – as is a world with more automation – because so much more is needed. But at the same time, we fear there will be less jobs and less of our planet’s scarce resources.”

What do we know about the future with any certainty? Anagnost said that more and more people are joining the middle class every day, over half the global population in fact.

“I know there are many definitions of what middle class is,” he added. “Whatever your definition, the fact that 4 billion people enjoy mobility and prosperity is enormously good news.

“But with this increasing prosperity comes increasing demand: For more housing; hotels; more automobiles; and more airplanes. We know that more is inevitable. As we make more things for more people, we also know that we create more potential for negative impact. Making all we need with less harm to the planet and people is a reality that we all need to face up to.”

How can companies like Autodesk help solve problems of such enormity and complexity?

“It’s a massive challenge, but it’s also a massive opportunity,” Anagnost said. “There are three areas I think we all have an impact on, and they’re all completely interrelated.

“First, we have the opportunity to better use the world’s energy and materials. Using less is part of it, but it’s also about better: more renewable energy and more circular materials. Better is also about the health and resilience of the entire population, that means designing products without harmful materials that compromise our safety, or using supply chains that compromise people, it means designing buildings that prioritise health and well-being, and designing cities that are resilient in the face of climate change.

“Finally, we all know that automation is changing jobs. But it’s also creating the opportunity for more meaningful work, better work, and a path to prosperity for more people. Together, we have an opportunity to create a more sustainable, more equitable, and more prosperous future. A future that’s better for the growing middle class, but also for those still striving to get there.”

One of the areas in which Autodesk is working to reduce waste is in the construction industry where it is helping Marriott to build modular hotels, combatting a shortage of construction staff. Over the last five years Marriot has built 30 low-rise properties, but this year will open the world’s tallest modular hotel. The 26 storey Nomad hotel in Manhattan, New York, has been built in conjunction with Skystone, a company that specialises in modular buildings. 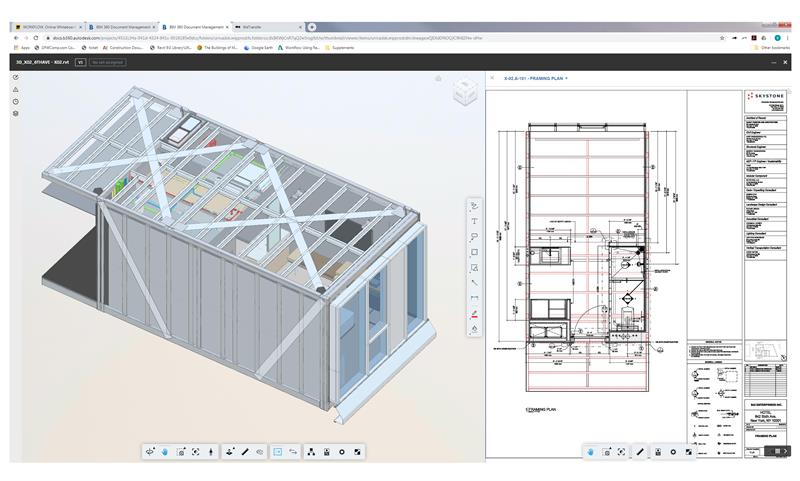 Each of Skystone's hotel rooms is a single, self-contained module that has been built and fitted out in a factory using the exact amounts of materials needed.

Each room that makes up the hotel is a single, self-contained module that has been fully fitted out in a factory in Poland using only the exact amount of material needed. The whole hotel – 168 modules – is then shipped to the Port of New York and then transported by truck to the site where they are craned into place on the central concrete core and hooked up to the facilities.

Anagnost stated: “Over half the work is still done on-site, but the work has changed for the better. It’s simple, it’s predictable. But beyond that, there’s also less disruption to the neighbourhood: less noise, less dirt. Because of the building’s performance, Marriott qualified for a floor space credit, the city granted them an extra 5500ft2 that will become a rooftop bar which will make it more attractive, bring more guests, and more revenue.

“Maybe you’re not building high rise hotels, but if modular can do this for Marriott, just imagine what it could do to help you use energy and materials more efficiently.”

Skystone used Autodesk’s Revit and AutoCAD to design the individual modules, Assemble for preconstruction and BIM360 for construction management.

Also in the construction industry, non-profit Build Change uses AutoCAD, Revit and Dynamo to structurally assess dwellings in areas vulnerable to natural disasters, like earthquakes, and retrofit them to make them more resilient. Its goal is to build 10 million more resilient homes in the next 10 years, which Anagnost went some way to help towards by donating $500,000 at the event.

“Technology helps us create a more prosperous future,” Anagnost said. “But we need to create better experiences for people as well.”

Nowhere is this more evident than at Disneyland’s newest attraction, the 14-acre Star Wars: Galaxy’s Edge site. One of the major attractions here is the Millennium Falcon, which is not just a replica of the set, but an interactive experience and the result of over 600 different models all integrated in a single source, encompassing design, fabrication and installation.

The Millennium Falcon at Star Wars: Galaxy’s Edge is not just a replica of the set, but an interactive experience and the result of over 600 different models all integrated in a single source, encompassing design, fabrication and installation.

There were two major constraints that drove its design: the structure and the interface with the ride system. The site footprint drove the overall shape of the building and the ride system occupied a big portion of the floor space. This left odd-shaped voids into which all the show set spaces had to be located. The design needed to be coordinated with incredibly small tolerances because fractions of an inch is the difference between a snug fit and an HVAC duct running right through the middle of the ship’s holographic chess table.

The show set, ride and facility teams were in different locations working on their respective designs concurrently. Coordinating electrical, AV, fire protection and show control systems was an iterative process with the design evolving over time as each discipline put more detail into the model, which pushed Revit to its limits. But working together concurrently rather than sequentially meant that the attraction opened earlier than planned.

“Organisations like Skystone, Build Change and Disney Imagineering are starting to see the value that is emerging from building on our platform,” Anagnost finished. “Think about how automation can help you connect the disciplines you work with, look for opportunities to eliminate the non-productive. Think about how you can grow your expertise and your creativity and focus on what adds value to you and to your business.

Confident manufacturers plan to invest and create jobs in 2018