Young engineers design the technological future for the Royal Marines

This is the futuristic vision of the Royal Marines dreamed up by Britain’s best and brightest young engineers, told to harness present and future tech to imagine how the Royal Navy’s elite troops might go into action in the future.

Young engineering graduates from the UK Naval Engineering Science and Technology forum (UKNEST), representing nearly a dozen leading defence, technology and engineering firms, were asked to plan a mid-21st Century assault by Royal Marines on an enemy missile site perched on a clifftop

They came up with a string of ideas – many previously confined to the realm of science fiction. These included exo-skeleton suits covered by a chameleon-like skin allowing wearers to perform super-human feats, such as scaling cliffs effortlessly, and blend with the environment. Manufactured from composite materials, this would be a lightweight carbon fibre structure embedded with load bearing alloy strands. The Human Universal Load Carrier (HULC) provides a weight-bearing frame allowing the Royal Marine Commandos to transport heavy loads of various equipment, for extended operations, greatly increasing their strength and endurance. 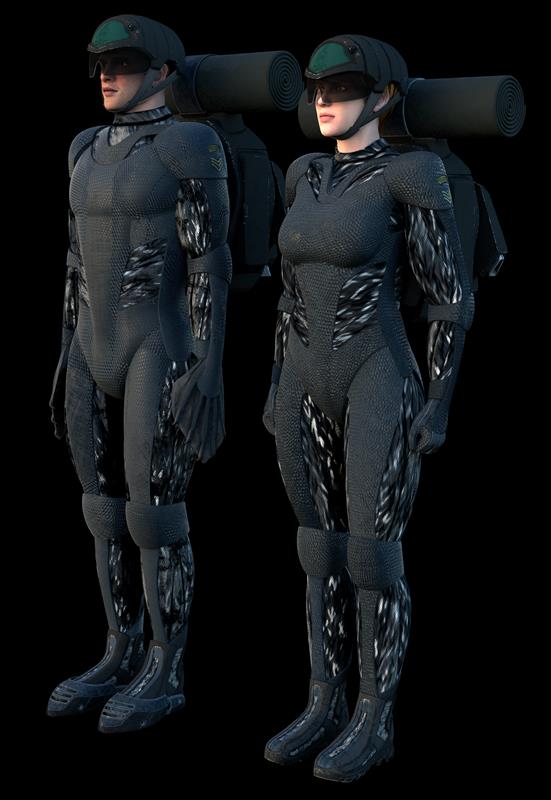 Nano-fibre pressure sensors woven into the Future Combat suit transfer the Commando’s motion into low power signals to drive motion.The HULC suit is actuated by a nickel hydroxide material, which responds to the low power signals to morph, and can exert and withstand forces thousands of times greater than its own weight.

The ‘fabric’ of the Future Combat Suit will be constructed from a synthetic polymer. Kevlar strands woven into the combat skin will provide protection equivalent to modern body armour.

A Nano-LED mesh embedded in the polymer incorporates an adaptive camouflage system in the Combat Skin, allowing Commandos to control their appearance and melt seamlessly into their surroundings.The polymer fabric will also contain controllable micro-pores to regulate the Commandos’ temperature in extreme conditions.

Another idea was ekranoplan ‘flying wings’ replacing landing craft, silently skimming across the waves at hundreds of miles an hour. ‘Ekranoplans’ is the name Russia gave to the first usable wing-in-ground-effect machines that skim the water’s surface on a bubble of air, thus allowing huge speeds with low drag and minimal power – transforming the way troops are brought ashore.

With a sleek arrow head and low-drag profile the Ekranoplans will be able to deploy from the Queen Elizabeth Class aircraft carriers far out at sea, away from hostile forces.Dynamic fan drives are housed in an angular pod top and aft of the main body.Powered by a hybrid drivetrain comprising a compact gas turbine and dual carbon batteries, the fans will boost the Ekranoplan up to speeds of 300 knots (more than 20 times the current speeds).The vehicle can swiftly cover large distances from the carrier strike group, before switching to its batteries and water-jet propulsion system for low speed, silent manoeuvring as it approaches its insertion point to deploy the embarked team of Royal Marine Commandos.An active camouflage system embedded in the Ekranoplan’s hull provides enhanced stealth capabilities to the vehicle.

These were just some ideas. Others included ‘’Holographic Marines’ to decoy the enemy; helmets with displays providing Marines with the latest intelligence, battlefield info and details of a squad’s health and fitness levels; small intelligence drones which feed the latest information direct to commandos’ hi-tech helmets; boots that harvest energy as the commandos move to power radios and other equipment; and portable 3D printers producing food in the field. 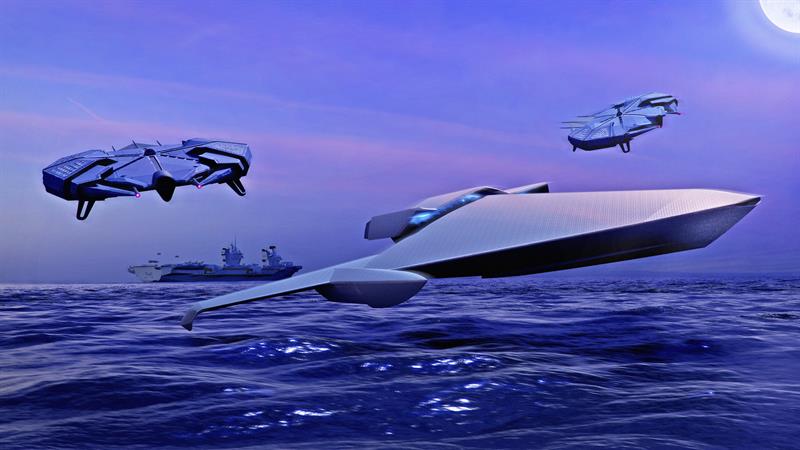 The ideas were arrived at after graduates spent a day at the Commandos’ Training Centre at Lympstone near Exeter to understand what it takes to become a Royal Marine, some of the current equipment used and the challenges faced on real-life operations.

The engineers were then given the raid scenario and thrashed out ideas, looking at what troops would be equipped with, how to get them ashore from ships over the horizon, how the Marines would neutralise a protected target, how they might protect themselves and distract the enemy.

Graduate Chad Swaby, from the MOD’s Defence Equipment and Support organisation, came up with the idea of contact lenses with thermal imaging ability and artificial intelligence which can differentiate between civilians, enemy soldiers and hostages – from the way they move.

“The whole event has been a great opportunity for us to see what commandos do, what they have to go through. It’s helped me to understand what I need to give the marines to help them succeed on a mission.”

Major General Matt Holmes, Commandant General, Royal Marines said: “The Marines form over 40% of Britain’s special forces and are seen as the tip of the spear. Our objective has been to envisage radical capabilities to make us more agile and lethal, while being able to operate in a complex digital and networked future environment.

“We can’t say how much or how quickly the reality of these visions will come to fruition. But what we can say is that if only 20% of these ideas come to reality then we will be at the cutting edge of tomorrow’s technology.”

Defence Secretary Ben Wallace said: “It is tremendous to see the pioneering visions of young British engineers push the boundaries of technology and conventional thought. The Royal Marines have a long history of delivering unmatched capabilities across a wide range of scenarios and theatres.

“As global threats continue to evolve and become more complex, it is vital that we encourage our armed forces and industry to work together to ensure our fighting forces strengthen their operational edge.”