Italian owners of a Tesla Model S 100D have managed to drive for 1078 kilometres (just shy of 670 miles) on only one battery charge, setting a new record for production line electric vehicles.

The challenge was organised and won by Tesla Owners Club Italia, a non-profit association recognised by Tesla as Italy’s official Owners Club.

The car is a normal production car with standard low rolling resistance tyres, the team said the air conditioning was kept off to save power and a smooth driving approach, called hypermiling, helped the them reach their target.

“The driving was made simply by the semiautonomous driving system which helped us to keep a constant speed in the middle of the lane,” said one of the drivers, Rosario Pingaro.

The journey took 29 hours through suburban roads in Salerno, in the south of Italy, at an average speed of 40kmph (25mph) with five members of the Italian Tesla Owners Club driving in shifts. The car used 98.4 kW/h of electricity, which is equivalent to eight litres of petrol, according to Tesla Owners Club Italia president Luca Del Bo. 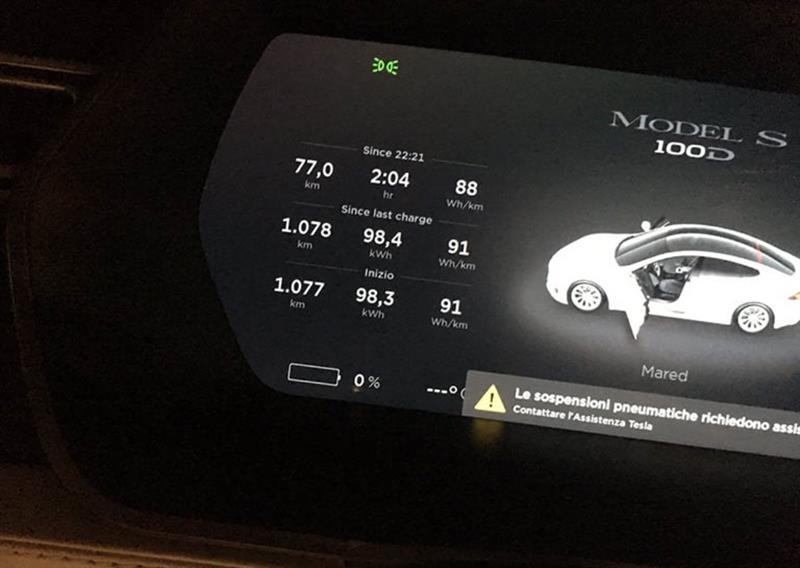 The club states the journey was made possible thanks to high output of the electric engine that uses 95% of the energy for motion. In comparison, even the most efficient combustion engines today do not exceed 30% efficiency.

Tesla boss Elon Musk was quick to post about the achievement on Twitter, stating that it was the first time a production electric vehicle had exceeded 1000 kilometres on a single charge.

Despite the record being achieved under very specific conditions the record is still big news for EV enthusiasts. It shows what the vehicles can do when really pushed and it will probably inspire the car makers to aim for these numbers when driving under ordinary conditions.

The previous world record for the feat was set by Steven Peeters and Joeri Cools of Belgium in a Tesla Model S P100D, which stopped at 901.2km (560miles). This latest record is expected to set off a chain of new record attempts. Once the Tesla Model 3 gets into the hands of more people – due to its cheaper price tag – there is no doubt mileage records will be broken with that vehicle too.