A revolution in valve design

While innovations in many fields have leapfrogged throughout the 20th century and beyond - one field has stayed relatively static: valve design.

While of course, designs have evolved over time, many valves still owe the majority of their make-up to eminent Victorian inventor Bryan Donkin rather than any innovations cooked up in a 20th century lab.

And this, perhaps, is unsurprising. The Donkin valve is ‘good enough’ and has been for many years. However, it is not without its issues.

The problem with conventional pressure regulators is the very thing that enables them to work at all – elastomers.

This is because a typical regulator works by using a diaphragm that constantly modulates as it controls pressure, and the flexibility required so that this modulation can take place is enabled by a limited range of elastomers.

However, the very flexibility that makes these elastomers so good at their role, is also what makes them so inefficient in the long term, as the constant flexing leads to fatigue, erosion, and embrittlement. Over time, this means that valves enabled by elastomers are prone to failure in service, requiring frequent replacement and repair. And of course, the pressures that they can withstand are limited by their elasticity. Push them too far, and breakage is inevitable. That is, until now.

Professor Thomas Povey, an engineering professor at Oxford University, faced the limitations of these valves during his experiments at the Osney ThermoFluids laboratory, which boasts some of the most sophisticated instrumentation and analysis facilities in the world. Here, Prof Povey needed to be able to gauge very precise measurement of heat transfer in turbine blades in the course of his development activities for a number of gas turbine and jet engine manufacturers.

In order for these tests to be carried out, very precise control of gas flow was required in order to capture performance data accurately. Unfortunately, the current regulators on the market simply didn’t have the speed and accuracy of performance needed. This was because traditional regulators typically take time to settle to the set point, sometimes over 60 seconds – limiting the time available for data collection. They also hunt around the set point, and depending on set-up can suffer from droop.

Undeterred, Prof Povey realised that if he was to carry out these experiments in the most accurate way, he would simply need to develop his own regulator. Over an extended development and testing programme, he designed and developed a regulator which settles on the set point within seconds, is very stable over the full operating range, and suffers minimal droop 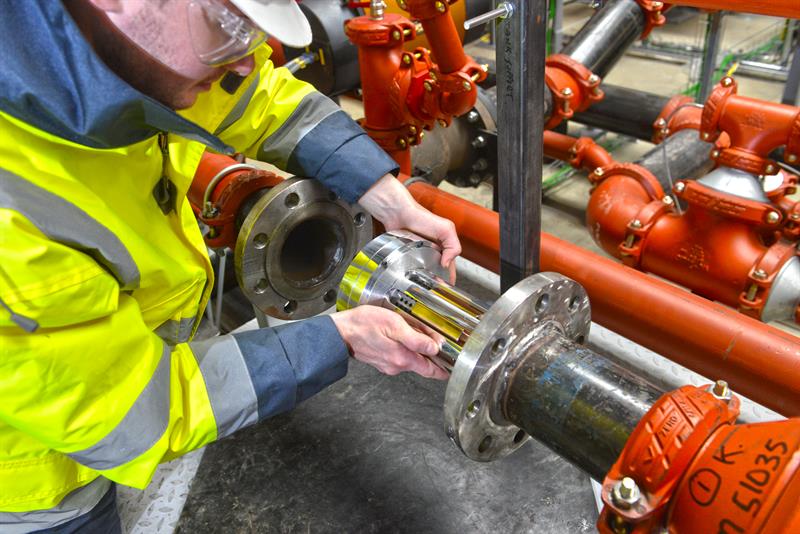 In the Oxford Flow model, the diaphragm is replaced by a direct sensing piston actuator, which greatly simplifies the design of the regulator as well as eliminating the main reason for failure in these devices.

One side of the piston is exposed to downstream pipeline pressure while the other side is balanced against a pressure cavity controlled by a pilot regulator. The piston actuator operates over an optimised feed-hole configuration to provide precise, stable control across the entire operating range. During operation, the piston moves inward, reducing the size of the cavity when the downstream pipeline pressure exceeds that within the pressure cavity set by the pilot regulator.

A number of patented flow regulators, primarily targeted at the oil and gas industries, are now being produced and marketed by Oxford Flow, a technology business originating from the University of Oxford and supported financially by Oxford Sciences Innovation (OSI), a £320m fund created to support ambitious Oxford technology companies and backed by names such as Google and the Wellcome Trust. As well as providing ‘off-the-shelf’ solutions, the business will also be working with individual companies to provide bespoke solutions to their engineering issues.

When used in water networks, this means that fewer crew members are required to install it. It also reduced the need for heavy lifting equipment. The small size also offers the potential to reduce the size of trenches for installation. All of these factors, both individually and combined can significantly reduce the overall installation cost.

Again, to take the example of the IP Series for use in water applications, these characteristics combined all support even better performance. For example, conventional PRVs can take one or even two minutes to settle in a stable set point. The IP Series achieves this in around 10 seconds. This contributes to a calmer network, reducing surge and its consequent impacts on pipes, leakage and other capital equipment in the network. This precision performance has significant potential impact in network pressure management. It could, for example, enable a network to run at lower pressures and within tighter parameters. Similarly, the use of an in-line design helps to minimise flow turbulence, reducing the impact on pipework and equipment downstream.

Another benefit comes from the structure of the Oxford-model valve itself. Traditional regulators have complex flow paths, with dead space and many moving parts. As axial flow units, the Oxford Flow products have an inherent advantage.In addition, the simple design lends itself to use of specialist hardened materials if particular resistance is required for specialist applications. The team has undertaken extensive CFD and other modelling using Oxford’s supercomputer to maximise efficiency of flow. And finally, the units will fit within the current strainers, filters etc found in particular applications in upstream oil and gas, in common with other regulators.

“Because of our connection to Oxford University, and various science, space, nuclear and jet engine developments, we’re exposed to some very specialist requirements, and the team is working on several bespoke applications,” said Prof Povey. “There may be needs which can be identified for requirements beyond our current designs, and the team is keen to work with industry to identify these needs and to design solutions”