Additive manufacturing continues to develop at break neck speed in terms of the range of materials that can be printed, the resolution, machine and materials cost, and throughput. However, the gap between prototyping, or low batch size at best, over to full production is a bridge that has yet to be built.

Or has it? Hewlett Packard has come up with a 3D printer that it claims is at least ten times as fast as its nearest competitor and therefore brings production of larger batch sizes within range.

Called Jet Fusion, the printer works on the powder bed principal. A layer of powder has detailing and fusing agents printed by jets and a heat source follows straight after to fuse the material.

One interesting aspect of the system is that it is a two machine solution. Preparation and processing (eg removing all the un-fused powder) is done on a separate processing station, meaning the actual printing station can remain productive continuously.

“The printer’s always building and the processing station’s always processing,” said Craig Perry, enterprise sales specialist. “It’s a one-to-one ratio. We can do 16 x 12 x 16 inch build area in ten hours. So whether it’s hundreds or thousands of little parts, or one massive big part, you can build it in ten hours. That’s incredibly fast.”

One of the highlights of this system is that powder that wasn’t used during printing can be reprocessed for use in the next build. “We say we can reuse 80%, but I believe that it’s probably much higher than that,” claimed Perry. “It’s really just the residue powder on the product that is lost.” 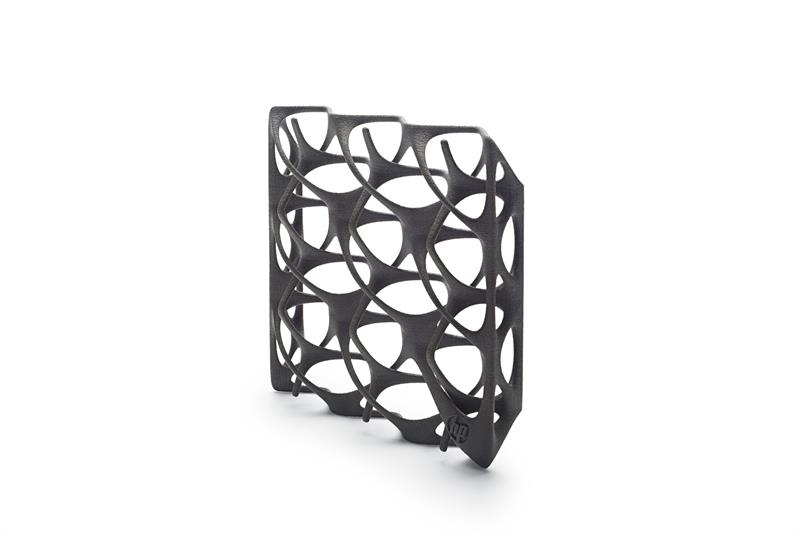 At launch the only material available will be the ubiquitous Nylon 12, with Nylon 11 to follow soon and many more in the development cycle. However, HP’s strategy for materials for this printer promise to be its most disruptive feature. Perry explained: “One of the major problems in trying to move 3D printing into manufacturing is that part costs have been extremely expensive. One of the reasons is because of material cost. So we’re going to have a competitive material market, which is going to reduce the cost of the individual part down to a point where it makes a lot more sense to use it in manufacturing.”

Rather than selling exclusively its own materials, as is commonplace in both the 2D and 3D printing market, HP will certify and package third party materials, making them available on a dedicated web page. It will be the material suppliers who will set the prices, so the market becomes competitive and materials become cheaper. “We estimate that material costs will be less than 50% of anybody else in a similar marketplace - and that’s just with the Nylon 12,” said Perry.

Using Nylon 12 necessitates all parts being black initially, but colour units are in development although there is no release date for this yet.

Perry admits that the first applications will be for prototyping with the tooling and fixturing market also looking very promising. “But then, as this technology gets adopted and adapted, we’ll start to get a lot of end use parts being made this way,” he added.

Jet Fusion is available in two versions, the 3200 and the more productive 4200, with prices for a system comprising 3200 printer and processing station starting at about £130k.

The impact of 3D printing on the manufacturing and logistics sector