Getting to grips with bionic costs

Recent advances in robotic prosthetic hands have been little short of extraordinary, but have remained out of the price range of many who need them. However, a number of engineers and start-ups are looking to change that.

There can surely be few more gratifying and obviously beneficial applications of engineering design than medical prosthetics. To restore an individual’s ability to interact effectively with their surroundings by providing them with limb function they previously lacked is as laudable an endeavour as one could ask for.

Happily, recent years have seen huge advances in the development of high-tech prosthetics, with materials, components, manufacturing methods and – most crucially – robotics combining to produce a degree of comfort, lightness and functionality never previously dreamt of.

The downside, of course, is that such solutions don’t come cheap. While robotic prosthetic arms have generally come down in price from six figures to five, they remain far beyond the price bracket of most who need them. In the UK, the National Health Service still doesn’t offer such limbs as standard, meaning that only those with independent means or extremely good health insurance can hope to benefit from this life-changing technology. Meanwhile, of course, most people in the developing world can only dream of having access to this sort of technology. 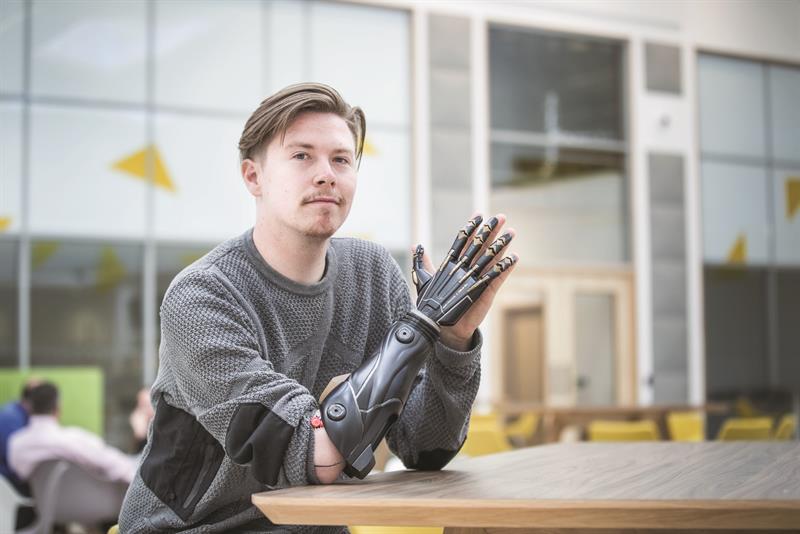 The race is on, therefore, to provide the latest prosthetics to those who might ordinarily lack the means to afford them. There are a number of initiatives to achieve this, but one of the most successful and high profile is Bristol-based Open Robotics. Founded by 2014 British Engineering Excellence Awards winner Joel Gibbard and Samantha Payne, the company is committed to developing affordable robotic systems that enhance the human body.

According to the company, the main areas where it has been able to innovate to achieve savings are: cost; weight; size; style and control.

Currently, multi-grip bionic hands cost anywhere between £25,000 to £60,000 per hand. They are only available through private clinics and are considered to be too expensive for the NHS, despite, although NHS patients still regularly petition for them.

Open Bionics has created a device that is almost the same in terms of functionality as such devices, but at a price point of £10,000 and under for hand, wrist and socket. Open Bionics believes this device will fall into a price point that NHS clinics will be able to afford and is already working with NHS England to get these devices to patients. In fact, the company is involved in an NHS clinical trial which means its devices were being tested with patients through the public healthcare pathway. The company claims that clinicians have been amazed by the devices, and the fact that Open Bionics can offer a radically more affordable and accessible device through the use of cheaper manufacturing methods and the use of strong, flexible materials. 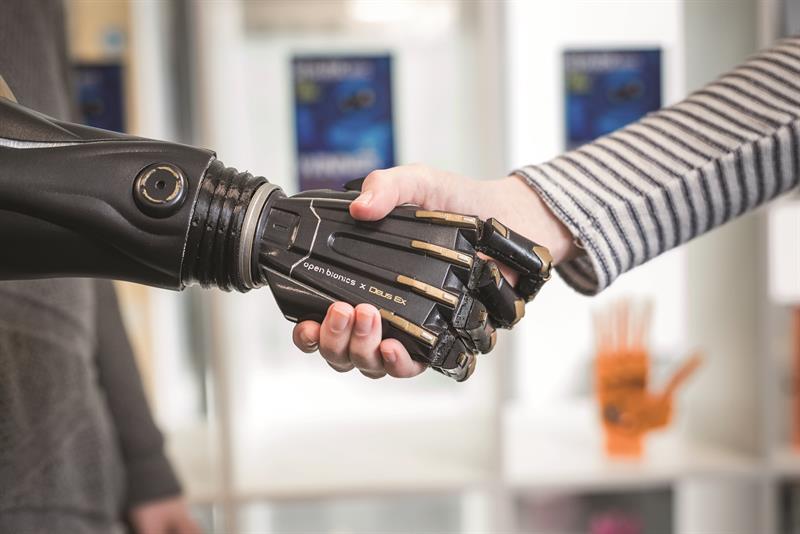 Another problem addressed by Open Bionics is that Multi-grip bionic limbs are often too heavy for patients to wear all day. The company’s first device is lighter than alternatives and the same weight as children’s NHS myo-electric devices that only offer one degree of freedom (DOF). By contrast, Open Bionics will offer a multi-grip myoelectric hand with five DOFs at the same price point as NHS single-DOF hands. Amputees can intuitively control their bionic fingers via arm muscles. This is achieved by use of a 3D printer to create the hand in four separate parts, custom-built to fit the patient using scans of their body.

Another area in which Open Bionics is innovating is in the development of multi-grip bionic hands for children under 14. During its clinical trials with the NHS, which began in June 2017, Open Bionics has fitted multi-grip bionic hands to children as young as eight. This was a world first and it is this device that will be the first to go to market.

To support this, Open Bionics has contracts in place with entertainment giants such as The Walt Disney Company and Square Enix. This will make it the first company in the world to offer Iron Man bionic limbs and other superhero styles. This is not just branding or superficial aesthetic styling. During R&D, the company found that style had a huge effect on psychological acceptance of limbs and improved body confidence. Having a limb you feel proud to wear can be life-changing,

Open Bionics is far from being the only player in this field, however. Unlimited Tomorrow is a company founded by US entrepreneur Easton LaChappelle when he was 18. His interest in prosthetic hands began when he was 14.

He takes up the story: “I’d taken a robotic arm I’d built in my bedroom to the science fair and I met this little girl who wore a traditional prosthetic and I realised that my $200 homemade arm was better than her $80,000 prosthetic. That’s when I knew I had something that could really make a difference. What if she had a device that actually matched her body, the right size, weight and colour, fingers that work? One that provides haptic feedback so there was a real sense of touch? Skin that’s tough and durable but with a texture that’s natural? What if she could actually paint her nails? What if she had a prosthetic designed just for her inspired not bymass manufacturing techniques alone but by the individual? And what if 20 people can get one for the same cost as a traditional prosthetic?” 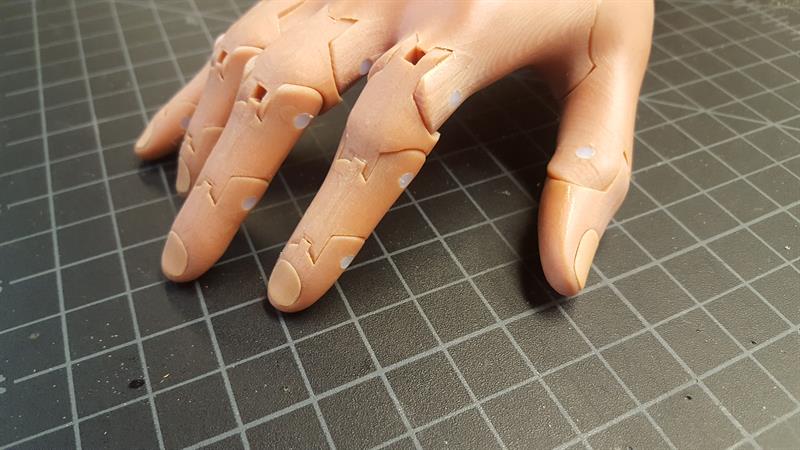 These questions led him to conclude that there was a significant gap in the market for affordable, bespoke devices. He says: “There’s a lot of problems with the current market right now and these off-the-shelf solutions. The problem is that not only are they expensive, they’re robotic looking and generic, they take one or two months to fit and on top of that they hardly work and have limited functionality. A hand that literally just looks like a hand costs $5,000. A simple human-like claw costs anywhere up to $100,000 and to even get to full human functionality these $100,000 plus arms are hardly available to the market.”

So why aren’t there better solutions out there and why do they cost so much? According to LaChappelle: “Really, these big medical prosthetic companies focus on amputees who have the money and cater to that demographic, which leaves the majority of the market untapped. Because the process takes so long and it’s expensive, there are a lot of children who don’t have prosthetics as well as around the world at a global level and in third world countries or undeveloped communities.”

With this in mind, Unlimited Tomorrow has created a revolutionary product and is changing the whole business model behind it. Says: LaChappelle: “We first deploy 3D scanners to amputees. [these are simply a small tablet fitted with a mobile scanner] and we actually scan both of their arms. If I’m missing my right arm, a family member or friend scans this arm to generate a socket. But we scan the other arm, the full arm – if they have one – and we use that data to generate a mirror image, so it’s unique to that person. And that’s really the special part, we can create advanced technology for a fraction of the cost because we’ve automated the process of going from scan to full robotic finished customised prosthetic device.”

with Dassault Systèmes and Stratasys, who were respectively announced as the software and additive manufacturing providers for Unlimited Tomorrow in February this year. “We receive the scan data and it goes through this automated process instantaneously,” says LaChappelle. “We get the files and we distribute them to 3D printers around the world. Right now, we’re using the new Stratasys J750 machine to print it in full colour. We get the colour data from the 3D scan and we can match the actual device to that unique colour.”

Technologically, while the devices may be designed to be low-cost, there is no shortage of innovation contained in them. “There’s also an incredible amount of technology,” asserts LaChappelle. “We have individual finger movements, we have haptic feedback so there’s actually a sense of touch, we’ve taken what takes months down into weeks and if not even faster. This device actually weighs less than a human arm, but it includes wireless charging and a battery life of three to four days, incorporating machine learning to take the raw sensor data and transform that into meaningful human-like movement. We’re incorporating some of the world’s best technology into this.”

Things are only just getting started, however. “We have one device out in the field right now, we’re working with a number of amputees today and our goal is to do 100 this year, that’s where these partnerships really kick in. We’re working with Stratasys on the R&D level to refine the devices and use better materials, we’re using SolidWorks to completely redesign the system with scalability and automation in mind and get these really nice organic features.”

Amputee bonds with son thanks to 3D printed bionic hand

Getting to grips with offshore wind turbines

Amputee bonds with son thanks to 3D printed hand