The aerospace industry is keen to embrace additive technologies to minimise the ‘fly-to-buy’ of its more exotic and expensive metals. Here, Andrew Williams finds out how a collaboration between the UK and US could help develop the processes further.

Last June, British multinational aerospace components company GKN Aerospace announced that it had entered into a five-year partnership with the US Department of Energy’s (DOE) Oak Ridge National Laboratory (ORNL) in an effort to industrialise additive manufacturing processes and support what it describes as a ‘revolution in global manufacturing’. So, what exactly will the partnership entail?

According to Wesley Bates, media and communications manager at GKN Aerospace, the ultimate aim of the $17.8 million (£13.7 million) cooperative research and development agreement will be to ‘advance the family of hugely promising additive manufacturing processes’ as well as support progress towards their use in the manufacture of ‘major, structural components for aircraft’.

In doing so, he says, the partnership leverages ORNL’s core scientific capabilities in materials science, high performance computing and material characterisation – capabilities that build on what he describes as a growing ecosystem in metal additive manufacturing at the DOE’s Manufacturing Demonstration Facility, leading to ‘improved efficiency of materials and energy usage for aerospace applications’.

“Ultimately, the public-private partnership drives manufacturing innovation and provides a pathway to economic growth and jobs,” he says.

As Rob Sharman, global head of additive manufacturing at GKN Aerospace, explains, a key objective of the new collaboration will be to create a prototype machine to manufacture complex medium- and large-scale aircraft structures from titanium. In doing so, the project team will further develop a process known as laser metal deposition with wire (LMD-w), an additive manufacturing technique that constructs metal structures by deploying lasers to melt metal wire into beads on a substrate over several layers.

Another of the main objectives of the partnership is to ramp up existing work on electron beam melting (EBM) processes, which creates intricate small- to medium-sized components by melting a metal powder with electron beams to a level where they can be introduced into full-scale, high-volume aerospace production.

50% to ‘unlock new manufacturing horizons’ and allow complex components to be produced with no performance compromise.

Despite GKN signing a deal with a US based research centre, there are strong indications that existing UK centres of expertise in additive manufacturing (AM) will have the opportunity to get involved in the initiative and enjoy the fruits that it bears. The company already operates a dedicated facility at GKN Filton specialising in development and production-led powder bed applications that house a wide range of technology and equipment capable of carrying out a range of AM processes including Electron Beam Melting, Metallic Laser Powder Bed, Selective Laser Sintering and Fused Deposition Modelling. 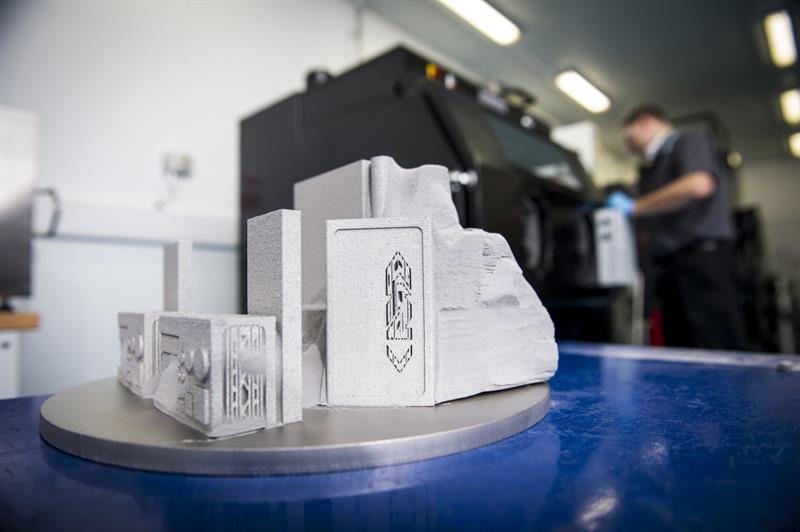 According to Sharman, the recently announced CRADA (Cooperative Research and Development Agreement) with ORNL is simply the latest addition to what he calls GKN’s ‘global ecosystem of partners’ working with the company’s global centres of excellence in AM including those here in the UK to push the boundaries and develop industrial additive manufacturing.

In Sharman’s view, this is particularly relevant because AM has the potential to change the way industry designs and manufactures future products in all sectors, not just aerospace.

“GKN already works with the UK Catapult centres as well as other UK universities and research partners in AM,” he says. “Our wide range of AM capabilities and processes position us to take advantage of the revolution in manufacturing that we believe AM will bring, enabling designs and materials to be manufactured that would be impossible today with traditional manufacturing techniques.”

Further proof of the company’s commitment to additive manufacturing also emerged in June, when an optical ice detection probe produced by GKN used AM methods. The probe was successfully deployed on an Atmospheric Research Aircraft (ARA) operated by the Facility for Airborne Atmospheric Measurements (FAAM) in Cranfield.

The successful flight test was the culmination of a technology roadmap created to develop GKN’s patented ice detection technology, which demonstrates system capability in atmospheric icing conditions. The ice detector works using an optical fibre array consisting of a source of laser light and six receiver fibres arranged for monitoring the reflected source signal under icing conditions. The response signature of the reflected signals is processed with an Ice Detection Algorithm (IDA) to determine rates of ice accretion on an aircraft, as well as the type of ice and the thickness of ice build-up.

Although the probe itself was configured in the format of the established industry standard fuselage mounted advisory probes, Sharman reveals that the optical sensor itself is capable of being integrated into aerodynamic surfaces across the aircraft allowing for localised ice detection and response.

In the flight test configuration, both the probe and the probe housing were additively manufactured in Titanium 6-4 using a laser powder bed process. According to Sharman, the use of additive manufacturing was of fundamental importance in helping the company keep up with what he describes as the ‘challenging timescales of the flight test campaign’ to ensure GKN met the window for icing conditions.

“This was down to design flexibility up to and during manufacture,” he says, “as well as the elimination of the procurement of long lead time titanium billets. AM design also enables features that have been difficult to produce through conventional production machining processes.”

Looking ahead, Sharman reveals that the flight test was just the first significant milestone in implementing this technology across wider applications in aerospace and related industries, and the project continues with routes to probe industrialisation and further development for ice detection in engine environments in partnership with a major engine OEM, as well as structural integration of the sensor head in wing leading edge surfaces.

Come and meet the global composites community at JEC World 2020 in Paris.

Global sensing will use clouds