Engineering firms are looking to automate in areas previously off limits in an effort to stay competitive, which has lead to the rise of a new generation of safe and assistive technology. Justin Cunningham meets the collaborative robots.

The past decade has been marked in technology innovation and cultural change. These two facets of modern life are now deeply intertwined and locked in a symbiotic relationship.

However, 50 years ago while mobile technology was barely conceived, it was predicted that machines would become so ubiquitous that households wouldn’t be without a mechanical servant to help with daily chores. Sadly, while the tools of the trade might have improved, they still need people to operate them.

The industrial landscape though has become more mechanised. And it’s a trend that’s set only to increase. Manufacturing is beginning to look as if it could once again become more localised, driven by rising labour costs abroad. This, coupled with a desire for faster delivery, increased quality and more flexible production, means that reshoring is happening, albeit at a slower rate than many would like.

It is, however, not a straight win for old school industrialists. To remain competitive automation technologies are likely to be applied much more widely. The UK’s manufacturing sector could grow significantly in coming years, but jobs are unlikely to keep pace, at least at a linear rate.

The road to automation

The UK has, to date, lagged behind the majority of European countries when it comes to robotic automation technologies. Figures from 2013 claim the UK has just 27 units per 10,000 manufacturing employees compared with 137 in Germany, 113 in Italy and 59 in France. While these numbers are improving, there is still a general reluctance from industry.

There are all sorts of social, economic and operational incentives and disincentives about whether or not to invest in automation. The common belief is that automating leads to job losses and upfront investment is steep. Indeed, installation is a formidable undertaking. Large cells with safety cages are needed, with set up requiring expertise and time. It means traditional robotics are seen as an ‘us or them’ technology. All in all, UK manufacturers have, on the whole, rejected the concept as a consequence.

The landscape is changing though. The rise of the internet and connectivity has fundamentally changed the consumer. It is no longer a case of one size fits all, and high volume manufacture rules the way. Designers and engineers are being increasingly asked to produce more customisable products, and that needs manufacturing flexibility.

Those involved in automation and robotic design are having to rethink how machines are used. Many have started to offer something that is more easily customisable, can be intelligent and flexible, and have coupled it with a financial package that’s attractive.

Enter the cobot, or collaborative robot. These multi-tasking robots are designed to support workers, rather than completely replace them. No doubt, inspiration has been taken from the consumer world, where technology is viewed broadly as beneficial and accompanying, and not overly intrusive or in danger of making users obsolete.

One of the forerunners is from Rethink Robotics. The US based company is now moving in on the UK marketplace and sees potential targets in areas that have not yet automated. Rodney Brooks, chief technology officer at Rethink Robotics, said: “Imagine if you had to take a six month course to use a smartphone, I don’t think they’d be so popular. And, one of the reasons robots aren’t popular in factories is that ordinary people are not able to use them.

“What we see in factories is workers asking if they can get the robot to do a particular task that they might hate because it’s boring, or if there is a lot of dust, or maybe a bad smell.”

Brooks founded the company in 2008 and introduced his first robot in 2012, which he calls Baxter. He wanted to design and engineer automation technology that is inherently accessible and safe for workers to be around, making it possible to deploy in environments that have historically been off-limits to automation.

“Roboticists have been successful in designing robots capable of super-human speed and precision,” said Brooks. “What’s proven more difficult is inventing robots that can act as we do, that are able to inherently understand and adapt to their environments. We believed that if we can cross that chasm within the manufacturing environment, we could offer hope to manufacturers looking for innovative ways to compete in our global economy.”

Baxter and its more recently released partner, Sawyer, have both been given a humanoid touch by the inclusion of a screen that shows eyes and expressions. While this might seem a little excessive and even superfluous – and let’s face it, they are – the screens are not without function. They act as a touch screen to control all kinds of parameters and settings, but also the eyes convey messages to surrounding workers about the machines behaviour and almost, what it is thinking... almost.

The eyes can also signal that it is aware that a person is approaching or that, for example, it has understood a task that has been programmed in manually by moving the arm through the required movements. It also signals if it is surprised, confused, or even sad – equating to various levels of operational abnormality.

Baxter is targeted at pick and place type applications, and any repetitive or monotonous job. An example might be in distribution where there is a great deal of variability between the many products needing to be packaged for delivery.

Sawyer, on the other hand, is designed for more precision tasks and has a repeatability of 0.1mm. Examples of use could be circuit board testing, with multiple different boards coming down the line. The robot is said to ‘feel’ how parts fit on to test beds.

The biggest concern within robotics, whether you believe the movies or not, is not being injured or killed by one, i.e. safety. A key part of Baxter’s safety system is the 360° sonar used to sense and map surroundings. This allows the robots to be aware of any workers in the vicinity and track movements.

These are known as series elastic actuators, and provide instant ‘give’ if there is an impact. In addition, all joints are back-drivable, meaning they can easily be rotated by hand, even when the robot’s powered off.

It is not just the new kids on the block that are looking at developing cobots, however. Automation giant Fanuc has also brought to market cobots that are to work side by side with humans, do away with safety cages and assist in strenuous or repetitive work.

Its CR-35iA and smaller CR-7iA, as the names suggest, make less of an effort to give off humanoid overtones. They look, essentially, like a standard robot – though differentiate themselves by the bright lime green colour, as opposed to the normal yellow used by the company. 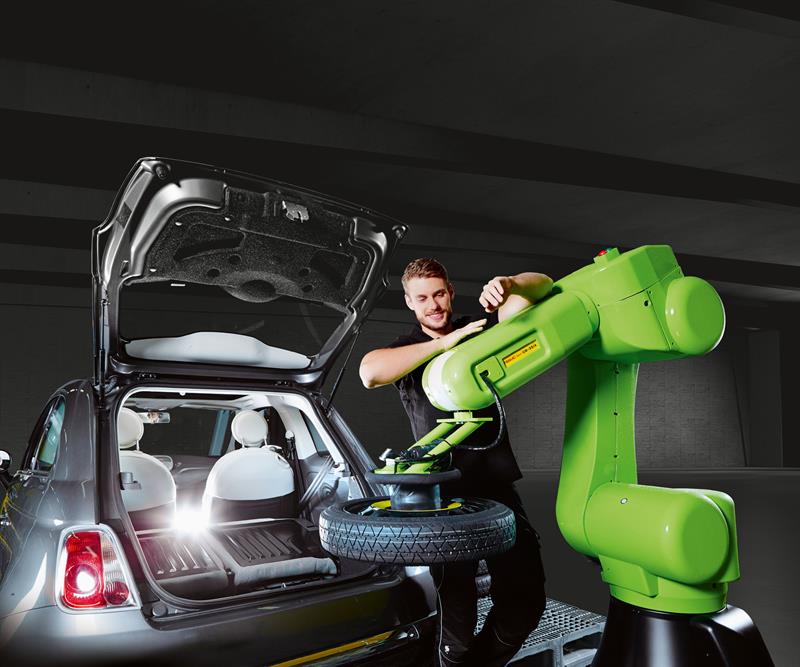 “Wherever we go at the moment, the collaborate robot is what everybody wants to talk about,” said Tom Bouchier, managing director of Fanuc UK. “We are getting enquiries from industries I hadn’t even considered.”

The larger CR-35iA targets a slightly different application to Rethink’s offering. The payload is the largest of any cobot on the market at 35kg. This is huge, and by comparison, Baxter is rated at 2.2kg and Sawyer 4kg.

Such a large payload seems to indicate this is to rival standard robotic units as much as anything else. This is also a heavy unit, weighing in at 990kg, meaning that it is less likely to offer quite the same flexibility.

This opens up a huge part of the market to cobot technology. The impressive payload is matched by its 1813mm reach, and repeatability of ±0.08mm. Like other cobots this opens up areas not previously automatable, but in this case within industries that already automate.

“Up until now, some companies have been limited in how much they automate as they’ve needed the space,” added Bouchier. “They couldn’t automate completely as everything with a normal robot needs to be kept behind a cage.”

Again, the CR-35iA does away with security fences, meaning workers and machines can be tightly integrated in to a production line, where it can help lift heavy objects into position for a worker and assist in the production process. In short, cobots are set to become one of the team.

Like many other cobots, safety featured highly during the design process, with the CR-35iA carefully engineered to make sure it keeps humans safe. It uses soft rubber skin over the entire body of the robot to reduce the force of a potential impact.

Other safety features include when a worker approaches or gets within a given perimeter, the speed of the robot slows down. The CR-35iA typically moves at 250mm/s when it is working as a collaborative robot, but has the potential to reach 750mm/s when working alone. The robot uses force sensing to decide when it should stop moving and uses force feedback sensors embedded in each joint.

The upfront cost of cobot purchase and installation is much lower than traditional robotics, with Rethink Robotics retailing Baxter and Sawyer for £19,000 and £20,000 respectively. The cost of the Fanuc CR-35iA is also expected to be considerably lower than a standard robot installation of the same payload, reach and repeatability.

“A lot of industries will see cobots as the way to go as the return on investment is faster,” said Bouchier. “You don’t need guarding, PLCs – system to system there is quite a lot of saving.”

Of course, through life, there is perhaps less of a productivity gain then the high-speed robots currently used in industries like automotive. But, this is not likely to stem the tide of cobots coming on to the market from manufacturers such as Kuka, Universal Robot and ABB. And this in turn is driving component manufacturers to develop new products.

An example comes from Harmonic Drive that has developed a very large hollow shaft gear, to allow cobots to have all the cables internally fed though, a demand from engineers developing cobots, as it leaves nothing to accidently catch nearby workers.

The market is expected to take off over the next decade, and along with additive manufacture, the Internet of things/connectivity, and artificial intelligence – the technology is predicted to be fundamental in the way future products are designed and made, and how future engineering and manufacturing sites will operate.

However, it is unlikely to stop there. The service industry should be perhaps be worried. Could you be getting your Starbucks or McDonald’s from a cobot sometime soon?

Is your robot battery up to the task?