Providing a glimpse into the future of robotic surgery

Wine mixing machines, futuristic voting stations and augmented reality medical diagnostics – robotics and machines are everywhere at the Cambridge Consultants’ demonstration day, but among all the quirky applications sits a medical bed. On it, a patient is seemingly undergoing cataract surgery. But, instead of a huddle of surgeons, the procedure is being carried out by one man sat at a desk looking through a screen operating two tiny robotic arms. Welcome to the future of robotic surgery.

Or is it? Before we get too carried away with the sleek and minimalist design of the so-called Axsis system, Cambridge Consultants’ principle engineer, Rodrigo Zapiain, tells me: "This is not a medical device or product, it is a technology that basically shows what we can do with robotics in the surgical space."

He adds that as part of a product development company that has been active in the surgical robotics field for some time, he has seen trends form around the direction the technology is going. Eye surgery (ophthalmology) was chosen as an example case study for the Axsis system as it is not currently addressed with robotics at this size.

Current surgical robots are bulky bits of equipment. For example, the da Vinci Surgery System, currently used in hospitals worldwide for laparoscopic (abdominal) and thoracoscopic (chest) surgical procedures, is made up of four large robotic arms with a bed attached and a separate console for the surgeon to sit and view the operation through. Although the system is precise enough to peel the skin off a grape or make minuscule origami models, it takes up a lot of space in the operating theatre and isn’t exactly what you’d describe as portable. 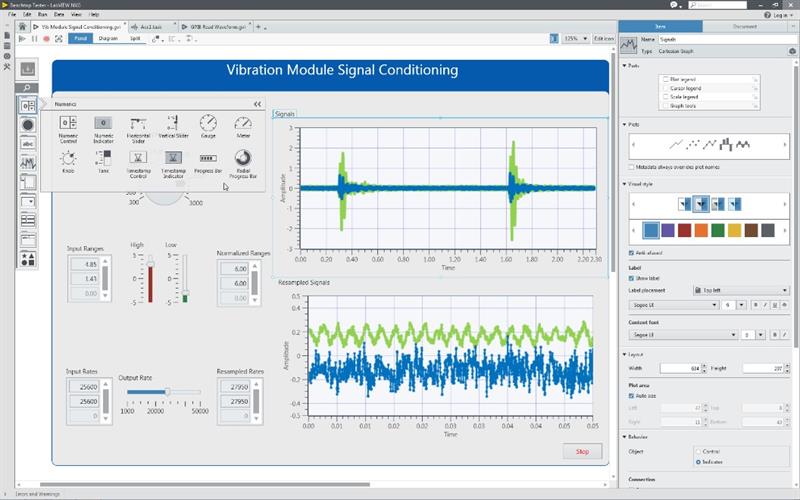 Chris Wagner, head of advanced surgical systems at Cambridge Consultants, says: "There’s no reason these robots couldn’t be a lot smaller, yet still retain that manipulation performance. When a robot is much smaller you can easily get in and out of surgery, and you can use them alongside other surgical tools."

Traditional surgical robots use an entry port into to the body as a pivot point. For precise movement inside of the body, larger movements are needed on the outside, hence the need for the large, rigid arms often associated with surgical equipment. It also means these systems typically require big motors and supports.

Robots in the eyes

Cataract surgery is traditionally carried out by hand using a phacoemulsification tool. This breaks up the lens using ultrasound and replaces it with a plastic one. The problem here is that the vibrating tip of the tool breaks up any tissue it touches and although highly unlikely, Wagner says around 1% of these procedures results in the tip damaging the tissue around the edge of the lens, which can cause complications and infection risks.

The innovative design of the Axsis system is that its robotic arms are segmented, enabling them to articulate inside the human eye. This flexibility means that the overall size of the system can be significantly reduced as the motion is contained, meaning smaller arms, smaller motors and smaller supports. Even the width of the access port is reduced with the arms of the Axsis system measuring 1.8mm in diameter compared to phacoemulsification tools which are 2 to 2.25mm wide. This, together with advanced imaging techniques, makes the procedure much safer, claims Wagner.

Each of the two arms in the Axsis system are made up of 11 individually micro-machined parts, 1.8mm in 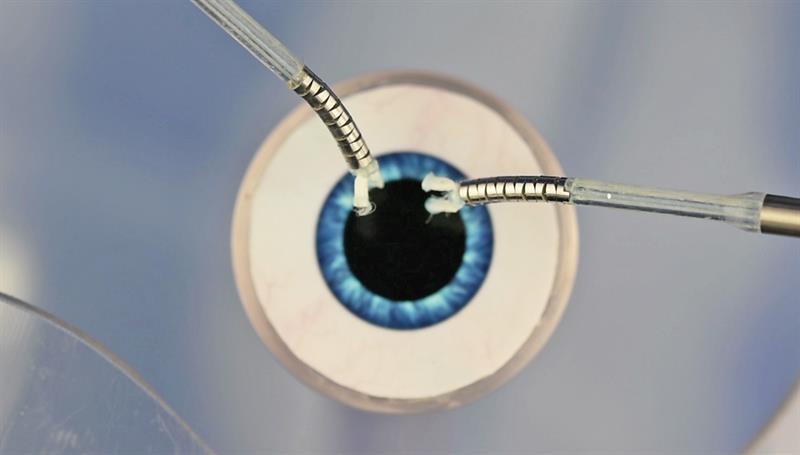 diameter and 1mm high, through which four cables travel from the motors controlling them to the tip of the arm. They employ rolling friction that provides low friction movement and the exact level of stiffness required to operate correctly.

There are also haptic safety features built into the Axsis system to stop inexperienced surgeons causing unwanted damage during surgery.

The second is a low friction high efficiency mechanical transmission between the tip and the motors of the robot that provides force-feedback to the controls. Zapiain explains: "The main aim of haptic feedback in surgery is to give back that sense of touch and feeling that robotic surgery took away from surgeons. When surgeons use tools with their hands, they can feel what is happening; how much resistance the tissue gives or if the arms are moving through a fluid that is viscous. The Axsis system was designed to provide some level of feedback to the surgeon who is controlling it."

Along with cataract surgery, Wagner and Zapiain say Axsis demonstrates how its novel system design could improve the way surgeons approach other procedures that require a high level of precision and minimally invasive access. From early cancer intervention procedures, to expanding the reach of natural orifice surgery for oesophageal and gastrointestinal tract procedures. Beyond that, Axsis could allow for robotics to be used in procedures that are currently only performed by hand, such as the placement of certain neurostimulation implants on specific nerves for chronic pain relief.

"If you don’t incorporate this right from the beginning of your design process, then even though you have a fantastic technology you’re going to end up with a bad product," says Zapiain. "That’s the difference between developing technology and developing a product, something that really works in the way you want."

Is augmented reality the future of surgery?