Ready for lift off!

Bloodhound SSC went on display for the first time in London last month and it was no model. It was the actual car that will make the land speed record attempts.

Eureka first covered the story when it was announced in 2008. It has been a long time coming and it could well run beyond 2017 before it goes for a peak performance record setting run.

However, when the cover was pulled off the car in London’s Docklands last month, there were gasps and applause from the world’s media. Suddenly the Bloodhound project has turned from being about education, promo and excitement, in to something very real.

The project has been beset by delays with original runs earmarked for 2011/12. Now, however, it is nearly 95% complete with just a few devilish details to be finalised.

It has to be said, the schedule was always ambitious. Taking a car to 1000mph has ‘10 year project’ written all over it. The initial hope of doing in just four or five was probably as much about keeping sponsors excited, and involved, as it was anything else.

“It has been a massive effort to get it to this stage,” said Sir Richard Noble, project director of Bloodhound SSC. “Normally you’d need an organisation of 300 or 400 people to do this... we peaked out at about 80.”

Bloodhound SSC has done what few in the engineering realm have been able to mimic: get the widespread backing of British industry, Government and the general public. It stands as one of the very few projects to become a household name.

“This has only been possible because we’ve got 340 British companies and 6000 schools involved, so it has been a huge engineering and educational effort all around,” he continued. “Having big names like Rolls Royce and JLR is great as that gives it the UK prestige and great kudos. But, none of this would have been possible without everyone coming together and getting involved.”

Bloodhound doesn’t just want to set a new land speed record, it wants to smash it. And it has put so much resource in to the project that if it does set a new record, it will stand for decades, as it will take a phenomenal effort to beat it.

While there are a number of other land speed record cars making attempts in the next few years, few are setting the bar quite so high (in excess of 1000mph), and none have forged such a long running engineering team that have intimate knowledge of the challenge.

Reviewing images and models of Bloodhound from when it was first announced in 2008, the car appears to be essentially unchanged – at least in terms of external geometry. But the ‘rough’ exterior initially set out has been subtly changed and tweaked as analysis has progressed.

Mark Chapman, chief engineer of Bloodhound SSC, said: “We think this looks really different,” referring to the actual car on display. “You get so use to seeing the show car, which is a full sized plastic mock up. But this has got weight. It’s got a real presence.”

Design of the car has been driven largely through computational fluid dynamics (CFD). The need for optimisation, and scope for improvement, has been come from work carried out at Swansea University.

There, the team has developed techniques to bring about small but important changes using CFD and computational optimisation, to geometrically parameterise the car in an optimiser that has been coupled to a CFD solver.

Dr Ben Evans, a CFD engineer for Bloodhound and senior lecturer at Swansea University, said: “The harder you hit it with the hammer, the more likely you are to find a better geometry. 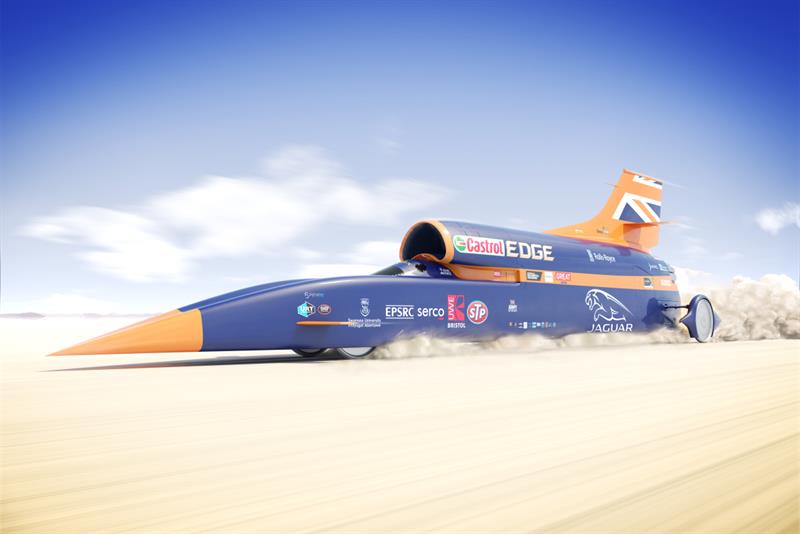 “With a CFD driven aerodynamic design like this, we‘ve tended to see the fidelity of the modelling increase as we’ve gone through the design process. Early on in the concept stage we got relatively crude models that we put together pretty quickly. So we want to see if we change something on the car, did the drag go up or down.

“When you get to the point when you are on the final design, and you really need to know accurate predictions of pressure distributions over the entire surface then you need high fidelity models. It might take days and days of run time on a super computer to get the result. That is then optimised, but it is still not optimal.”

Devil in the details

The reality is that Bloodhound is a very different car from that which was first outlined. Numerous changes have been made in and around the car, some subtle, others more obvious, and these are not just related to aerodynamic performance, but also its numerous internal systems.

“What I didn’t think would be a challenge is making it go in a straight line,” said Chapman. “I thought we’d put a fin on the back and that would be that. But, if the fin is too big it makes the car too stable, so if there is a side wind the car will pivot. So, we have to get the fin big enough that the car goes in a straight line, but not so big that if there is a side wind it will take you off track.”

It means that the car’s design has to walk a very delicate line on the edge of stability.

“It is designed to be unstable but controllable,” explained Chapman. “It is a 3% margin, and that is where we sit.”

In addition the use of two engine systems also caused issues. Originally the EJ200 Turbojet engine was at the bottom and the three rocket engines at the top. This configuration kept the Centre of Gravity (CG) low, and in an ideal position. However, it meant that when the rocket was turned on and began producing up to 122kN, it would make the cars nose pitch in to the ground. So, canards were added to generate life to counteract this force.

However, once risk began to be assessed, it was an area that could cause serious problems. In the event of hydraulic failure the canards would be locked in place, so after the rocket suddenly stopped the nose, the canard generating four tonnes of lift, would instantly lift the car in to air and cause it to flip up.

“That was a big ‘errrr’ moment,” said Chapman. “The jet engine weighs about a tonne, and the rocket 140 to 150kg. We decided we needed to swap them over to make the system fail safe. We did worry that this would raise the CG, and make it really high. But, with the oxidiser the two engines end up about the same weight, and it goes across the CG, so it doesn’t affect it nearly as much as we thought.”

The 3% is the margin between CG and the Centre of Pressure (CP), both are in optimised positions relative to each other, and moving either significantly effects aerodynamic performance, the balance and stability of the whole car.

The trouble with supersonics

Having to deal with shockwaves on the car is the one thing that makes Bloodhound as much of an aerospace project as it does a motorsport one. Three distinct shockwave systems appear on the car, the first of which is the traditional bow shock.

The second appears just above the head of driver Andy Green on the top of the driver canopy. While the fuselage and cockpit geometry may appear unchanged from early designs, it has been precisely modified and optimised to create the shockwave in just the right place. The angle of the cockpit canopy is such that the shockwave forms at the exact position needed to decelerate the air to around 600mph as it enters the turbojet compressor stage.

Then, finally, and perhaps most challenging is the shockwave at the back of the car, around the rear wheels. Key to designing any supersonic vehicle – or indeed aircraft – is the need to minimise the cross-sectional area. Unfortunately, at the back there two large solid aluminium wheels that protrude out with accompanying suspension system.

“You always have these battles with the people designing the internal structures and mechanical engineers,” said Dr Evans. “We need to minimise the cross-sectional area but they might say that’s impossible given the load.

“This is where we need to find interesting and novel solutions. The whole geometry system with the delta strut, the width of the wheel away from the car, the angle of these suspension struts is all driven by aerodynamic optimisation and that is largely done computationally, using techniques developed by Swansea University.”

In the early designs of the car, the delta struts are not fully developed. However, they are crucial. As the shockwave forms, high pressure tries to get under the car and pick it up. The delta struts create the shockwave on top of the struts, so instead of picking the car up, it presses it down.

While there are very few physical parts still to make, there is an awful lot of shakedown testing to be done. The car has been hugely reliant on computer aided design technology and simulation software, and getting virtual predictions to match physical outcomes can be a tricky business. A small unforeseen variable in the South African desert could drastically alter predictions.

“The challenge now is to get the car back to Bristol and then begin Runway testing in Newquay in spring of next year, before heading to South Africa in the later summer,” said Chapman. “And from this to that, there is still a hell of a lot of work to do.”

Chapman has been on the project from the outset, and perhaps knows the car better than anyone. So is he confident?

This would give the team the land speed record, but also the data needed to take the car to its ultimate limit.

“From 800mph to 1000mph is a big leap,” said Chapman. “The drag force goes up with the square of the speed, power requirement goes up by the cube of the speed. So there is a huge step change.

“Will it get to 1000mph? I hope so. To date, we haven’t found a technical reason why it shouldn’t, so we’re confident. But there are many unknowns.”

A new design of airship is nearly ready for take-off