Increasingly designs have electronics at their core, but importing electronic CAD into mechanical models can be clunky at best. Tim Fryer reports on a package aiming to challenge that.

Most modern engineers are doing more than just designing a static part. Indeed, most parts are no longer static or designed by a single engineer. The majority of systems do things that require power, motion and electronics, and these are a collection of design skill sets that are not easy for an individual to master. More importantly, for an optimised design process, it helps to keep as many of these functions in the same design environment as possible.

However, getting all engineers working in the same environment, or even getting their disparate files working with the same master model, is not easy. That, at least, is the view of Louis Feinstein, product portfolio manager for Electrical and PCB at Solidworks, who commented: “IDF, IDX, Prostep, DXF, DWG inputs and all of those different industry standards for data exchange: none of them are any good. They are tortuous. None of them meet the total achievable goal that our customers want.”

Electronic design engineering is becoming ever denser and mechanical engineers need to incorporate that in tighter packages. Students, says Feinstein, are now more commonly emerging with degrees in electromechanics, mechatronics and systems engineering.

“Electronics is everywhere and the future of design is in electromechanical systems,” said Feinstein. “So we’ve come to the realisation that this is something we need to be part of, and that the world is changing. SolidWorks needs to be the innovation platform of choice.”

Altium Designer is popular amongst electronics engineers already, while Solidworks has traditionally been linked to mechanical engineers. While Solidworks already had a package called Circuitworks, this is more about ensuring compatibility with industry standards for the electrical connections rather than provide a ground up design environment for electronics. Solidworks PCB proved a meaningful integrated solution that is the offspring of a joint venture between Solidworks and Altium.

“One of the challenges that everybody has is integrating electronics into complex or small systems,” observed Feinstein. “[Solidworks PCB] has the ability to integrate with SolidWorks, there’s a lot of emphasis on the electromechanical interfacing, but we did it in such a way that we call it ‘stress-freeing’, and that’s really the point of it.”

The other thing is to maintain existing workflows. Electronics’ engineers continue to design in the way they always have and the same for mechanical engineers. The difference to the norm is that these workflows concurrently run on the same model.

“When they want to synchronise, they can synchronise,” Feinstein explained. “The really interesting part about it is we can show you what the other person’s doing, you can accept or reject the change and the notification goes back directly. So, if an electronics engineer moves a mechanical feature he pushes it out to the mechanical engineer who can see the changes, and see how it’s going to affect the mechanical design.

“It’s an on-demand collaboration engine. When someone pushes it or pulls it, a little icon lights up because you have a new concept for you to take a look at when you approve it. The whole idea was to build the communication and make it really stress-free. Customers told us IDF, DXF, anything that they use is laborious, typically unsynchronised and if you have multiple people working on the same project, they typically get out of synch very quickly.” 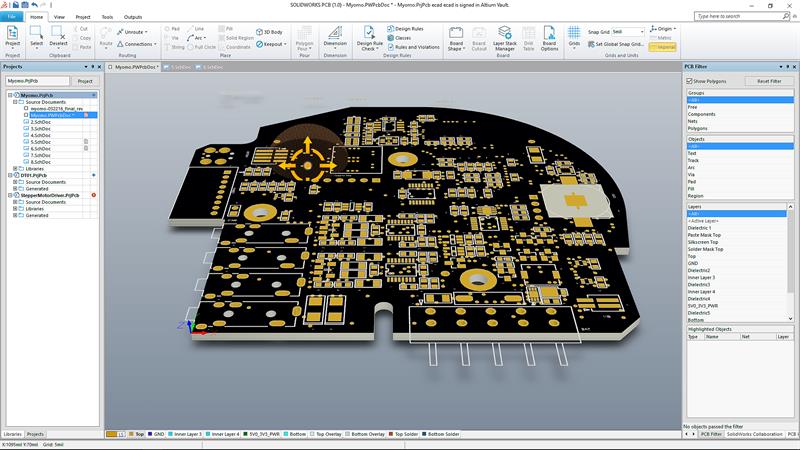 The project started as a joint venture over two years ago and in the interim a product called PCBWorks was introduced by Altium, combining technology from both companies. Feedback after the introduction of PCBWorks contributed to the Solidworks PCB, which was launched last month.

“SolidWorks is all about the user experience,” Feinstein said. “So major enhancements have been in the licensing, ease of installation, how it actually operates and ease of use. We wanted it to have its own persona - ECAD software with the ancestry and DNA of Altium, but make it simpler to use.”

Schematic layouts in Solidworks PCB can be captured in Visualise

Following a Solidworks customer survey, it was clear that some features of the original Altium Designer were not required and these have since been removed from the final Solidworks product. However, the big change is in collaboration capabilities. In the near future the Solidworks data management feature will be built in. When it is, Solidworks PCB will contain all the electrical design rules from Altium Designer and the equivalent mechanical design rules such as 3D collision.

Adding connectivity
However, companies already using Altium Designer are not being asked to switch to a new product if they don’t want to. A second product has been launched, Solidworks PCB Connector, which brings Altium Designer files into the Solidworks environment.

“The object here is not to compete [with Altium] – the object is to do what is right for the customer,” said Feinstein. 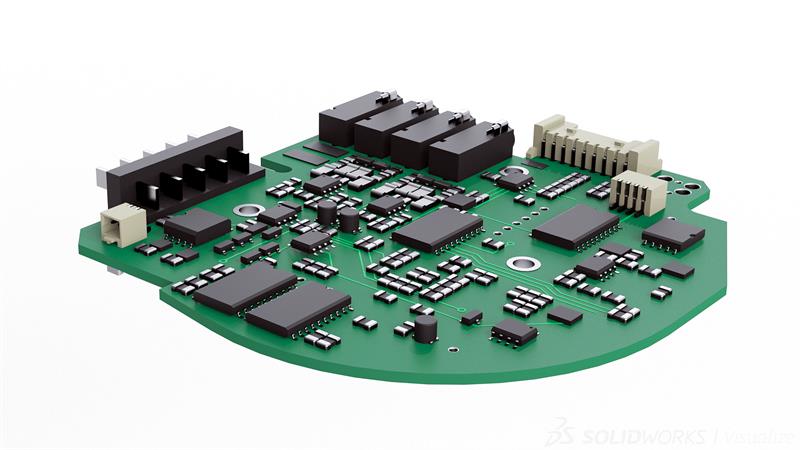 Dedicated Altium users can therefore carry on in their existing design environment but use Connector to enable collaboration with mechanical models.

Beyond the design flow advantages that working on a single model brings, there are other benefits. “Once you have the product in the Solidworks ecosystem, it’s incredible the amount of stuff we can do,” Feinstein explained. “We can do thermal simulation, we can do vibration simulation, and also visualisation. Customers can’t believe that we can build images of printed circuit boards that look better than if you’d take a picture of them.

Use the Solidworks ecosystem for full electromechanical design

“We’re bringing out this ability to design a product, make it aesthetically pleasing and get marketing collateral prior to even cutting any steel. So once you bring it into the Solidworks ecosystem everything changes, from incoming inspection to documentation. So it becomes part of the ecosystem and seamlessly integrated.” 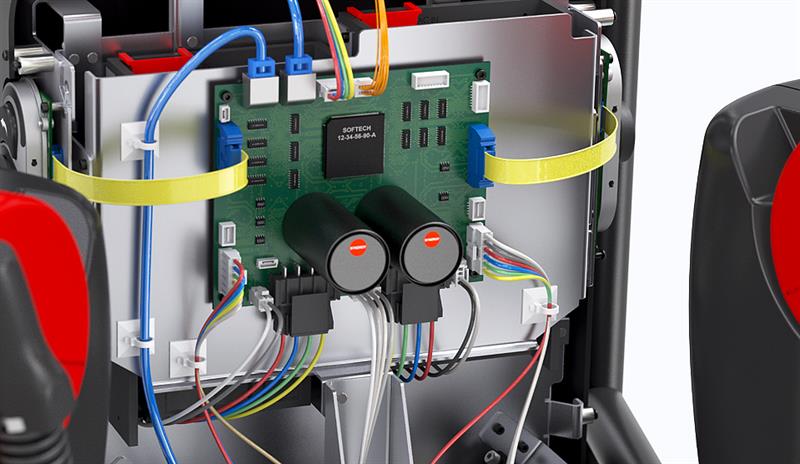 While Solidworks PCB should appeal to companies who are looking for this ECAD/MCAD integration without indulging in file transfer and translation, Feinstein acknowledged that it taps into the modern connectivity phenomenon.

He commented: “There is this exploding market of the Internet of Things, and connected devices go back into Industry 4.0. What we have here in Solidworks PCB is a backbone to do connected devices. Today people have all sorts of notions for connecting devices, but at the end of the day, its electronics that are doing the connections. The designs are becoming smarter and you need to have the software to do it. You’re still going to do a schematic. But you need this type of tool to get the schematics done right. These are the tools of the future.”

Solidworks PCB is aimed at the mainstream ‘Solidworks market’ but now addresses the requirement for those extra disciplines.

Feinstein concluded: “It will those that get involved in electronic engineering that will really benefit from this. But, we also see it addressing the needs of start-up companies that are using freeware or maker software, and need to make the leap to becoming professionals. They need professional grade software if their products are becoming ready for market or if the existing tool that they're using just can't do what they need them to do.”

Are CAD platforms ready to help incorporate the technologies on offer for design in Industry 4.0?