For at least a century, engineering was a profession that featured clearly delineated disciplines. A mechanical engineer was distinct from an electrical engineer, who was in turn distinct from an electronic or civil engineer, etc, etc. These delineations were, and remain, reflected in the alphabet soup of engineering institutions that exist in the UK – IMechE, IEE, ICE and so forth.

Of course, it has never been quite as clear cut as all that. Different disciplines have always had to cross over on certain projects and polymath engineers have always existed. However, for many years it was a rule of thumb that engineers tended to remain within their specialisms for most of their career.

More recently, however, these boundaries have begun to erode. The increasing complexity of projects has meant that levels of collaboration have had to increase, followed inevitably by greater cross-disciplinary understanding. Equally, as demand for engineers has increasingly come to outstrip supply, there has been a concomitant requirement for existing engineers to master technologies outside their traditional comfort zones.

This has led to the rise of what is known as the ‘T-shaped engineer’. The idea of T-shaped skills was first mentioned by David Guest in a 1991 article discussing the future of computer jobs, and then championed as an approach to hiring the right talent in order to build inter-disciplinary teams that can come together to create new ideas.

Essentially, the T-shaped concept is a metaphor for the depth and breadth that an individual has in their skills. The vertical bar on the ‘T’ represents the depth of related skills and expertise in a single field, whereas the horizontal bar represents a breadth of skills and the ability to collaborate across disciplines with experts in other areas and to apply knowledge in areas of expertise other than one’s own.

For engineers, this means not only possessing deep, technical skills, but also having broader attributes—such as empathy, communication skills, teambuilding, and the ability to collaborate – or ‘soft skills’. Increasingly, such skill sets are seen as necessary

One enthusiastic advocate of an increasing emphasis on such multi-disciplinary skills is Pete Lomas, the designer the original hardware for the Raspberry Pi and director of systems engineering at electronic design and manufacturing SME, Norcott Technologies.

“I think now, as an engineering society, we’re looking for T-shaped people, who have a breadth of knowledge, but also a depth of knowledge in one particular specialism,” he says. “Projects are no longer just about electronics, or mechanical engineering or pouring concrete. They have a cross-disciplinary aspect to them. For instance, buildings in downtown Tokyo have earthquake countermeasures that involve structural design, mechanical actuators and computer control systems all working in harmony to provide a solution. Lomas believes that this type of engineer increasingly represents the future of the profession, something he is keen to encourage via his role as the honorary president of the Institution of Engineering Designers. “I’m seeing lots of exciting developments coming up but in the main all the really game changing products going to be created by these cross-disciplinary teams.

On the question of how cross-disciplinary engineering can work in reality, Lomas says: “I can’t speak for industry in general, but I think they understand the value of bringing cross-disciplinary teams together. And if you think about it, industry has been doing this thing they call concurrent engineering for years. It’s not really that different, but the key difference is that you have someone at the helm with a good breadth of understanding of the whole project How many products do you see where the engineering concept is brilliant, but the final solution leaves something to be desired, so the product goes nowhere. It really needs all those facets to be brought together to make a world-beating product.”

Lomas is keen, however, to point out that he doesn’t foresee an end to single-disciplinary engineering. “If you’re an out and out electronic engineer and that’s what you are passionate about then that specialism is equally valid and critically develops the state of the art in that discipline,” he says. “However, particularly in SMEs like here at Norcott, I need what I call ‘cross-threaded people’. I’ve have an electronics engineer right now tinkering with a SolidWorks model of a group of mechanical components to see if we can get them to fit together in a better way with the electronics.”

This requirement comes about because of the increasing demands from customers wishing to optimise the integration of all aspects of a design. Says Lomas: “So he’s got the ability to model the mechanics and the electronics in parallel and see optimisations across the disciplines. The number of times people have come to me and said; ‘Here’s beautifully designed enclosure, now we just want you to put your electronics into it’ – and vice versa. That’s not how it can work anymore, if ever it really did! You need a lot of 3D modelling to give the customer the look and feel of the end product and validate everything will fit before we release it for prototyping, and SMEs need people with the skills to do that, it’s integrated product design” 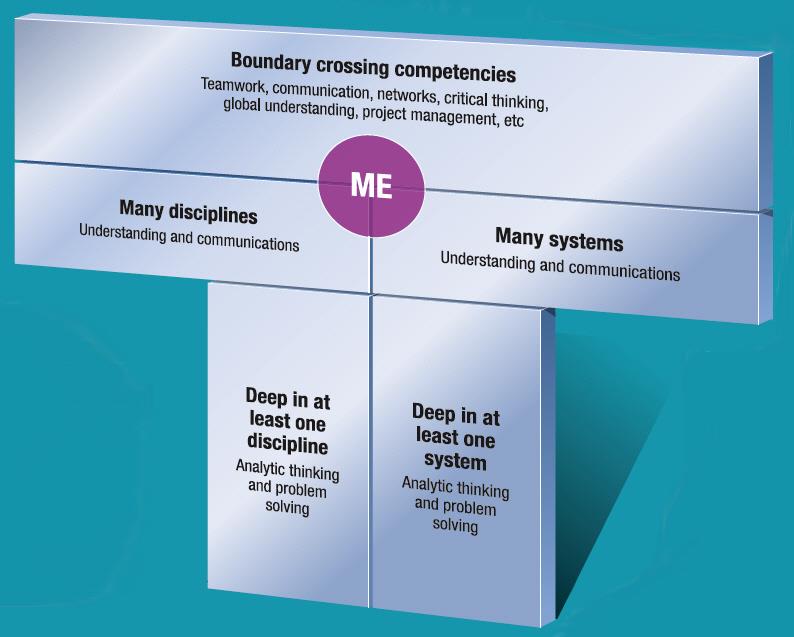 The question that arises, then, is where such people can be found? Here things become much more complex. While industry may be increasingly open to the notion of the ‘T-shaped’ engineer, and many grow into ‘T-shaped’ through necessity. the education remains stubbornly predicated on the older, much more clearly delineated paradigm in which different specialisms ‘stay in lane’. While industry may be in favour of the idea, when asked whether he believes engineering education caught up with that idea yet, Lomas is succinct: “I wish.”

The problem, he believes, is that education is not yet properly equipped to meet the demands of the employment marketplace. “There’s no doubt that education is suffering from a lack of funding, but the other dynamic that’s also difficult is the speed with which it can change. Our educational system lags far behind the jobs and roles that our society demands.New roles are developing faster than our education system can react. That’s not a criticism; it’s unfortunately a structural issue that needs to be addressed.”

Is this something he feels he can help address in his new role with the Institution of Engineering Designers? “I’m not pretending for a minute that I’m going to make a massive impact, but I do hope to make some difference. The critical thing underlying all this is if you look at the engineering pipeline. It starts off quite promisingly, but then it gets whittled away and by the time we get to graduates looking for jobs, it’s a very small percentage of the number who originally started with an interest in their early school years. It’s been recognised that signposting the varied and exciting opportunities in engineering is critically important. Coupled with that we need an educational system that develops young people to be inquisitive, engaged, collaborative, resilient and sufficiently agile so they can confidently pivot into to new opportunities as they arise.”

In his role with the Raspberry Pi Foundation, Lomas has devoted no small amount of his career to improving this situation, of course. Much of the thinking behind the Raspberry Pi was to make computer science and engineering accessible and comprehensible to children through demonstration. He says: “Keeping the Raspberry Pi without a case so that you could see its components was as close as we could get to showing children how it actually worked. More importantly for me as an engineer was that you could then attach LEDs and switches to it and with a small amount of code demonstrate, for example, how a set of traffic lights works.”

This model of learning through demonstration is rooted in his past. He says: “I was absolutely useless at school – I hated it. It wasn’t until I went to a technical college that things changed. The thing that did it for me surprisingly wasn’t electronic, it was a Pelton wheel. Being face to face with the actual device and being able to change parameters, more water, turned those dry equations into something tangible.”

This logic, he believes, can be carried through to encouraging the development of T-shaped engineers by encouraging the sort of projects in which they can thrive and by making them aware of the possibilities. As he puts it: “We need to give engineers the opportunity to get involved in all aspects of a project, and also time to learn and develop those new skill areas and become that ‘T’ shaped person.”

New metal means a wave of AM technologies are becoming available for industry, NOT Limp Bizkit!