The people’s car – not for sale!

Not only has Riversimple designed a striking new hydrogen-powered car, it is challenging the conventions of car ownership. Tim Fryer investigated the new project and found out that the business model has a profound impact on design.

Striving towards energy efficient transport has been a goal of the automotive industry for decades. Whether driven by high fuel costs or reduced emissions, it is clear that all of us, even those who still prefer larger cars, are concerned about fuel efficiency.

Technologies have improved the efficiency of the petrol engine, while electric engines have also progressed particularly with incremental improvements in battery technology. The hybrid of the two is claimed by some to offer the complementary benefits of both, meeting both environmental regulations and personal practicalities. However, such vehicles are still defined by their initial specifications, typically mpg and range, and this does not necessarily encourage car makers to make cars that are genuinely environmentally advantageous. The car makers want to sell cars and may be able to do that by offering an eye-catching mpg figure, but if that car rapidly degenerates then it is not of any concern except to the owner.

‘Whole system design’ is a philosophy being deployed by Riversimple that ties together car design, business model and environmental performance. The resulting design was unveiled last month and Riversimple’s (former) powertrain architect Dr Nicholas Sergent answered the question ‘what is whole system design?’ “It’s optimising a whole system instead of optimising parts in isolation,” said Dr Sergent. “If you optimise parts in isolation, you can do a very, very good job, but you might end up with an overall system that’s ‘pessimised’, not optimised. If you look at your whole system and look at the overall impact of each decision you make on every single component design or engineering business model, you end up with a different system that can be more optimised and achieve what you want to achieve better.”

In such an interlinked process it is not easy to identify a starting point, but Riversimple took a ‘well to wheel emissions’ approach [the total emissions from extracting the energy to driving on the roads] for all of the basic technologies - petrol, diesel, hybrid, different types of batteries and hydrogen. Dr Sergent said: “For example, advocates of the battery car say it has got a fantastically efficient powertrain. However, you still need a very big battery to get any decent range, you end up with a very heavy car that needs a lot of energy to move around. You can have a very efficient system that overall uses more energy because it’s heavier. So we really looked at everything to try and make a car that would be the most fuel efficient possible with the possibility of zero emissions, if you can have 100% green fuel. Having looked at all different powertrains we decided that building a hydrogen fuel cell car from scratch would be the best.”

Power demand was also analysed. Cruising on a motorway at regulation speed doesn’t take much power, just enough to overcome drag and road resistance. Virtually all cars are now capable of driving at higher speeds, 100mph or more, and that takes considerably more power, although we should assume that no Eureka readers ever drive this speed in the UK. Acceleration also requires a lot of power, but most of the time we drive at fairly consistent speed. Dr Sergent summed up: “You end up most of the time cruising at a normal top speed, maybe 60 or 70 miles per hour using not much of your engine, and carrying an enormous lump of iron or aluminium that you don’t really need.”

To remedy this the Riversimple team looked at is decoupling the power needs for cruising and for acceleration. It ended up using a relatively tiny fuel cell for constant power for cruising, and a bank of super capacitors to give enough power to accelerate and for that extra grunt uphill, and also to reclaim energy during braking.

“It means our powertrain is much more tailored to real needs,” said Dr Sergent. “It’s much smaller, it’s also cheaper than having a great big fuel cell or great big batteries to do all this. And what we ended up with is something called the network electric powertrain.” [See below] 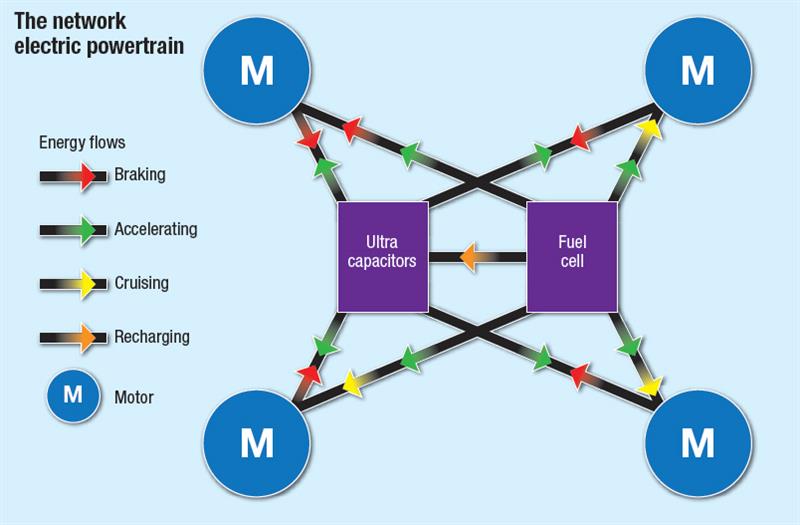 There is a fuel cell at the back, a bank of super caps at the front and four in-wheel electric motors, one in each wheel. The energy can flow in any direction except back to the fuel cell. During acceleration power can be drawn from the caps or from the fuel cell. During braking, energy goes back in the caps. It results in a powertrain that is both efficient and lightweight. Comparable vehicles might have a 100kW fuel cell, whereas the Riversimple vehicle – called Rasa - uses an 8kW unit – enough to keep cruising at top speed.

The hydrogen fuel cells are nothing remarkable in their own right, they are production units from Canadian company Hydrogenics that are commonly used for forklift trucks. The electric in wheel motors are produced by Printed Motor Works. Dr Sergent said: “We’ve got all sorts of interesting little creatures. For example, the seats are from a British company called the Seat Design Company. It’s extremely lightweight, weighs less than 10 kg, and it’s made of carbon tubes, aluminium nodes and a lightweight foam. So we’ve really looked at everything and tried to make it as efficient and as light as possible altogether.”

In fact the whole car, in its current pre-production form, is structurally constructed of carbon fibre and therefore extremely lightweight, topping the scales at under 400kg. It is another example of whole system design in action - having a light chassis means that it requires a smaller engine to move it around, which means it can have lighter chassis...it is not quite ‘ever decreasing circles’ but it has meant that the team could settle on a chassis weighing under 40kg. The consequence is a two-seater vehicle with a range of 240 and an equivalent fuel consumption of 300mpg.

Rasa, unveiled this year, has been styled by a design studio in Barcelona by head of design Chris Reitz, whose design credits include the new Fiat 500.By the time it becomes a production version its headline specifications will have softened slightly to a weight of about 520 kg, a 300 mile range and 250 mpg equivalent. It will take only three minutes to refuel, because it’s hydrogen. “And it will look cool and be fun to drive,” adds Dr Sergent, who has taken a step back from the company following the launch of the new car.

This is only half of the story however, because the business model that Riversimple has developed has also had a profound impact on the design. “We have decided we will not be selling this car,” said Dr Sergent, “we will be selling mobility.”

This means that customers, instead of buying the car, will pay monthly for a service, and this payment will include all the costs of motoring - the car itself, the insurance, the road tax, MOT, all the repairs, and even the fuel. It is intended to provide peace of mind for the driver who can keep a car for as long as they want before moving on to the next one. However, Riversimple will retain ownership of the car and will still want it to generate revenue for its projected lifespan, which may be 15 years or more.

“When you design a car for this business model, you design it differently,” said Dr Sergent. “It means that we’ve got a direct business incentive to make the car as robust as possible, as cheap as possible to maintain, and as fuel efficient as possible. So we basically have a direct business incentive to make good cars, cars that will last forever, that won’t break down, that won’t have bits that fall off, because we pay for all of this.” 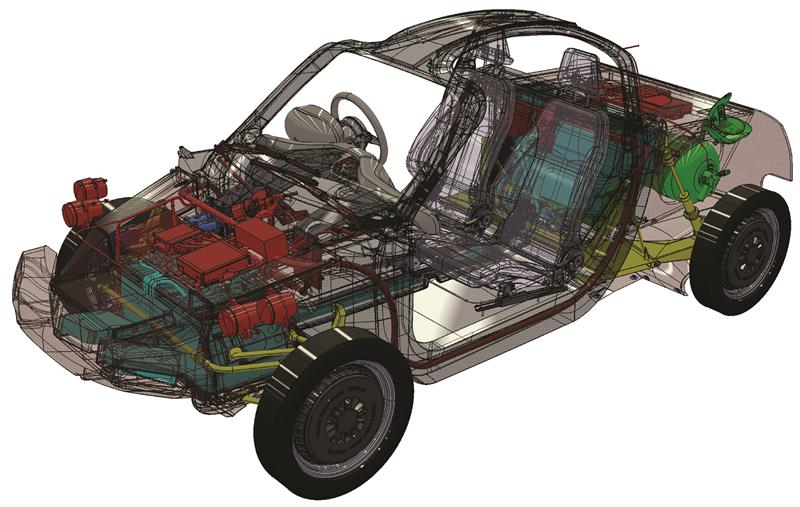 Even at the end of life there is an incentive for the company to have a car that can be recycled or remanufactured – it is the opposite end of the spectrum to car makers who need their customers to buy new cars every few years.

The carbon fibre might be an expensive option for some production cars, but it is inert, won’t rust, and the company could get 30 or 40 years use out of it. Also the Rasa doesn’t have moving parts in the usual sense – there is no driveshaft, so no lubricants and wear should be far less than in a typical car. Dr Sergent continued: “When you look at the whole system design including the business model, you end up with different engineering decisions, and you can make a system that’s more profitable, better for the environment. We’re going to make it more and more fuel efficient because it’s in our business interest. So you align the interest of the environment, the customer, ourselves, and the whole industry.”

It also accelerates technology deployment. Dr Sergent said: “OEMs, need to wait for fuels and technology, battery technology for example, to be as cheap as diesel cars before people will buy them in volume. And we don’t need to do that. We can afford slightly more expensive technology, because we make money through the entire life of the car - we can have a commercially viable proposition much earlier in the life of the technology. Today we have a commercially viable fuel cell car with carbon fibre while OEMs can’t do that because it would be too expensive for them.”

This leasing model for the cars is a philosophy that could be equally beneficially applied to the cars components, although this is not currently the case. Ideally from the perspective of the component supplier, they would like to be selling a new component every five or ten years, but if that component was leased, rather than sold, it would be in the suppliers interests to make components that were both robust and recyclable. “We know we’re not going to get there straightaway, and all the business currently works without this,” admitted Dr Sergent, “but if we could push our suppliers to consider this whole sale of service model, that would be extremely helpful.”

The Rasa has a top speed of around 60mph and is described as a ‘local’ car – for people going to work or to the shops, maybe needing to fill up once a week. The idea is that a fleet of cars could be introduced to an area serviced by one fuelling station. This is then a commercially viable step forward without having to start out with a fully nationwide network of fuelling stations. The infrastructure can build gradually from all these local schemes without large initial investment from either government or gas companies.

The plan for this year is to build 20 cars for a public trial which will probably be in Plymouth and run for 12 months. At the same time the company will continue to develop the car so that it will be in production and ready for the public in 2018.

Waste not, want not

Car design in the bright lights

Energy is not ideal