The technology behind Europe's fastest and highest roller coaster

Red Force is Europe's fastest and highest roller coaster, but this pales into insignificance when compared to the ride's truly brutal acceleration. Pulling a whopping horizontal 1.35G during initial acceleration, thrill seekers are accelerated from 0-100kph in around 2s, and within 5s the coaster is at its top speed of 180kph.

A rapid vertical ascent follows that sees riders slow for just long enough to take in the stunning view from the ‘top hat’ of the coaster at its 112m crest. This doesn’t last long, however, as the ride vertically plummets back to Earth accelerated by nothing more than gravity. As the coaster swoops down and levels out, those on board feel 4G of downforce before having just about enough time to let out a scream, sigh of relief or suitable expletive.

“We talk about roller coasters having bragging rights and that usually involves setting records,” says roller coaster guru and editor of US theme park trade magazine Park World, Paul Ruben. “These accelerator roller coasters are one of more than 50 current variations of roller coaster, which must be powered, at least in part, by gravity. It’s got to coast!”

Red Force is the star attraction of the recently opened Ferrari Land in the Spanish theme park resort PortAventura. With the coaster’s train-car mimicking the look of a Formula One car, it was vitally important the ride provides the same rapid acceleration as an actual F1 car.

It hasn’t been until recently, however, that an enabling technology has made such a coaster possible in Europe, and the development could mark a fundamental shift in the way roller coasters are designed and engineered in the future.

To date, many high speed accelerator roller coasters, also known as launch coasters, use hydraulics to provide the initial rapid get away. Indeed, the world’s fastest roller coaster, the Formula Rossa in Ferrari World, Abu Dhabi, is accelerated by a huge hydraulic system that generates a release velocity of 240kph. It’s similar to the steam catapults used to launch fighter jets on large military aircraft carriers.

While, there are accelerator coasters in the UK and Europe, and many use a hydraulic launch system, none have the same high speed or ferocity as the Formula Rossa, and for good reason. The sheer scale of the mechanism, the number of moving parts and the complex hydraulic launch system with nitrogen energy storage has meant that maintenance and operational costs have more or less stopped similar extreme speed roller coasters being developed.

Swiss based amusement ride manufacturer Intamin has installed both Abu Dhabi’s Formula Rossa as well as the latest Red Force in PortAventura. Lead design engineer, Daniel Schoppen, explains what makes Red Force possible: “The key enabler to achieving the fastest and highest coaster in Europe is down to our engineering and development of a particular type of electric motor, the linear synchronous motor (LSM).”

While LSMs have been used to accelerate roller coasters for 20 years, it’s only been in the past several years that the overall system has matured to the stage where it is powerful enough to provide the launch acceleration demanded by Ferrari.

Over the last two decades Intamin has been developing linear synchronous motors with a third party electric motor specialist to provide an alternative to hydraulic launch systems. 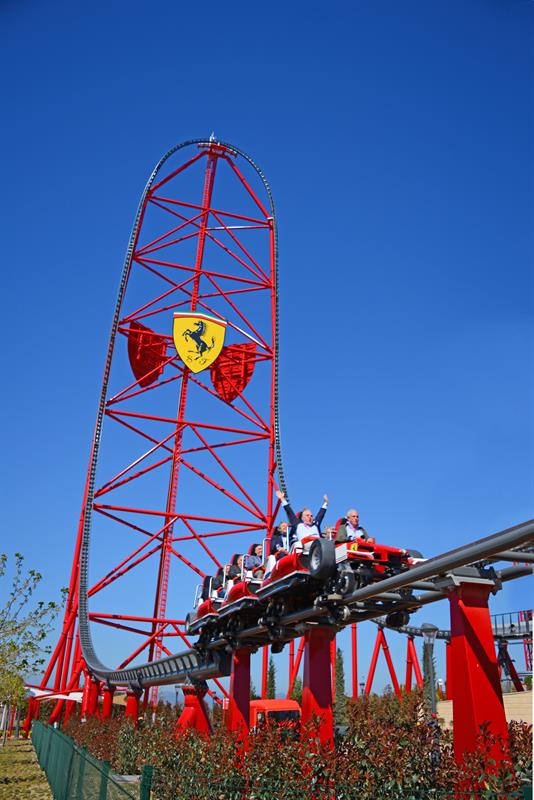 “There is no other LSM roller coaster in the world faster than Red Force,” says Schoppen. “We believe it’s time for such a big machine to go to LSM because of the big advantage that it’s more or less maintenance free, as you don’t have any wear contact in between the mechanical parts of the drive system.”

However, linear motors were only part of the development puzzle, the real challenge was how to store and then dissipate such a high amount of electricity over such a short time to provide the necessary thrust.

“It’s a question of how you store energy,” says Schoppen. “If you launch a train using energy provided directly from the power grid, you would need about 4MW of peak load. For most European parks that’s too much because they have to pay for peak load [not for overall consumption].”

“The key to go to such a speed – because you need a lot of power – is the energy storage system, so what we are doing is using supercapacitors.”

Supercapacitors, or super caps, bring together many of the benefits of batteries and capacitors, but alleviate the shortcomings. While super caps typically store 10 to 100 times more energy per unit volume than a standard capacitor, they’re able to charge and discharge much faster

than batteries, and can tolerate many more charge and discharge cycles. With an overall dispatch time of 36s, the supercapacitors have just 30s to store the energy necessary before rapidly discharging it to accelerate the coaster out of the station.

“This is the idea behind this coaster, otherwise you would have tremendous high peak loads,” says Schoppen. “Instead of the 4MW, we probably use 1MW peak load from the grid to feed the LSM systems.”

Supercapacitors have been available for well over a decade but only recently, within the last few years, has development provided the load cycle and lifetime stability data to enable their wider deployment and more powerful LSM application.

The entire induced acceleration of Red Force takes place during the initial horizontal 160m track, which supplies the car with enough momentum to take it over the ‘top hat’ at the ride’s summit where gravity takes the train-car on the rest of its journey.

The accelerating LSM system accounts for about 128m of the initial track, leaving 32m for additional high efficient eddy current brakes in the event of a roll back. Here, motors and brakes are split where they’re needed most, with more motors at the beginning of the track to provide initial acceleration, and efficient braking modules placed towards the ride’s initial vertical incline.

Linear motors are essentially unrolled electric motors, meaning, in this case, the stators become part of the track and the ‘rotor arm’ part of the car. Linear synchronous motor (LSM) design uses active stators with copper windings attached to the track with an array of alternate-pole high density permanent magnets attached to the car. These are arranged in a U-shaped ‘magnet bar’, leaving a ‘bottom open’ air gap to allow the linear stator modules to engage and propel the car.

“When the stators run within this air gap we have to maintain two very small contactless air gaps of about 6-7mm in between the magnet bar and the stator’s surface,” explains Schoppen. “These small air gaps bring the opposite magnets of the magnet bar really close together to guarantee a very powerful magnetic field to enable a more powerful motor.”

It means that an LSM system offers increased power but with the very high efficiency they’ve always exhibited, compared to a linear induction motor (LIM), for example, which is also used on roller coasters for their power density.

“We don’t have to induce the magnetic field here [on the rotor element], like you have to do with linear induction motors (LIM),” says Schoppen. “The downside, however, is you have to carry additional weight on the [train-car] vehicle because it’s a high-density magnet. But even with this weight disadvantage our LSM package provides nearly double the efficiency of LIM technology.

“We have 128m of those stators, and each one is approximately a 70cm long module consisting of three phase shifted copper windings. We bring a current with an interchangeable frequency to those stators, so the train is running on the wave of this induced current. This current creates a magnetic field, but it must be synchronised with the speed and position of the train.”

Magnetic hall sensors interacting with the car’s magnetic bar are used to pinpoint the train’s exact location on the track so the stator’s inductive magnetic field can be perfectly synchronised with the train’s permanent magnetic field. Here automated continuous real-time active control is needed, as each train ride behaves slightly differently. For example, weight will be different depending on who gets on and bearing temperatures affect friction.

Schoppen says: “The motor control system is connected to the hall sensors to identify the position of the train and speed, and by doing this we can actively control the LSM stages. If we know the tolerance of the operating train running through the launch section, we can also bring the efficiency of the system up and when synchronisation is near perfect then you gain a lot of efficiency.”

The Red Force roller coaster pushes the limits of speed and height thanks to the development of LSM technology. For Europe, this is a masterpiece as it slashes maintenance and energy costs, while incorporating the all-important ‘bragging rights’ of being the highest and fastest, with a brutal and realistic F1 kick of acceleration.

The sensor technology behind the Internet of Things

Power behind the weld