There are grey areas between science and engineering, but sometimes the theoretical needs to move to the practical. Such a case is fusion energy, and one British company has a clear development path for turning decades of science into a reality.

Scientific investigations are the foundation of the technological world we live in, but there comes a time when science needs to give way to engineering. Things need to be made to find out if they work.

“It’s a bit like the internal combustion engine,” said Dr David R Kingham, chief executive of Tokamak Energy. “When the first ones worked, people knew far less about the physics of combustion than they do now, but they knew enough to make an engine that worked and we’re in that sort of position with fusion. We know enough to take it on as an engineering challenge.”

Fusion is the holy grail of nuclear energy technology. With fusion, the legacy problems of radioactive waste are diminished and the fuel is cheap and widely available. It’s clean, green and sustainable – the trouble is that it doesn’t work, or at least not on a commercial scale.

For over half a century the Culham Laboratory, or Culham Science Centre as it is now known, has been at the core of fusion research in the UK. It was nearly 20 years ago that scientists at Culham managed to produce 16MW from a fusion process, the downside being that it required an input of 24MW in heat to make it work. Superficially at least, not much has happened since then, although the path of scientific discovery continues to be walked. Tokamak Energy was launched six years ago with a view to shake up the industry.

Kingham commented: “Progress has been really slow, and that is an engineering challenge. Scientific progress has been fine but we have this feeling that the science is already understood well enough. What we need to do is build high-performance devices and get the best out of them rather than do more and more science. More scientific understanding would be good, but more engineering challenges tackled would be even better.”

Tokomak believes that the faster route to fusion involves building engineering prototypes quickly, demonstrating high performance and then moving on to the next device.

Kingham continued: “The key for us with the device we’re currently building is to demonstrate very high plasma temperatures and pressures, and then to go on and make high temperature superconducting magnets for the next device.”

Of course ‘quickly’ is a relative term. In the six years since Tokamak Energy has been in existence it has produced two prototypes and its third will be completed in the next month or two. To explain what Tokamak is trying to do it is probably best to have a potted summary of the technology. 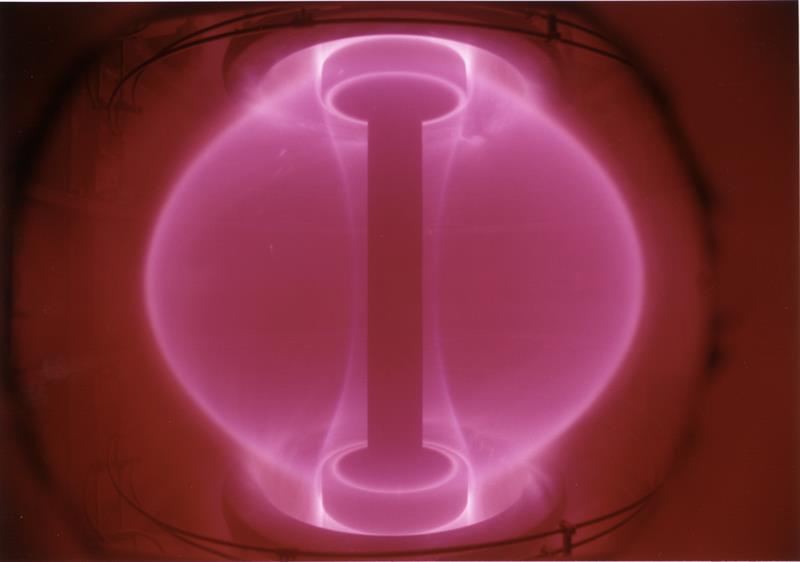 Super-heated plasma inside a tokamak

Fusion is what happens in the sun – super-heated hydrogen atoms colliding to produce helium and a lot of energy. The attempts to develop a controlled fusion reaction revolve around forcing two hydrogen isotopes (deuterium and tritium) to collide. However, to do so requires phenomenal temperatures to create a superheated plasma containing the hydrogen isotopes, more than 100,000,000°C, hence the net energy loss in the early Culham experiment. It’s very difficult to attain and as yet impossible to maintain.

The combination of extreme temperature and pressure, provided by gravity in the sun, strips the outer electrons away from the positively charged hydrogen nuclei creating a neutral but fully ionised plasma.

When the reaction happens, helium along with a single neutron, are produced along with a lot of energy. Four-fifths of this energy is carried out of the plasma by the neutron, which is captured outside the inner vacuum vessel. The energy of this fast particle is extracted as heat, which can then be used to produce steam that in turn drives an electric generator.

Culham developed a process using magnetic fields to contain this plasma, which has been further refined by Russian scientists resulting in the tokamak design. Tokamak is the Russian word for, ‘ring shaped chamber’. These early designs were doughnut shaped but the promise showed by spherical tokamaks was what led to a couple of scientists at Culham, along with Dr Kingham, to form Tokamak Energy.

Tokamak Energy’s idea was to combine these spherical tokamaks with high-temperature superconductors, a potential solution to the problems created by pumping millions of amps through copper magnetic coils.

““The conventional view is you have to go to bigger and bigger devices, but we’re saying you can keep tokomak’s relatively small. You have to go to very high magnetic fields, so the engineering is very challenging, but you can get fusion in a device that’s not tens of metres across, but just a few.”

If a device is too small then particles are more likely to hit the sides as plasma is difficult to retain inside the magnetic field. As a consequence, temperature is constantly being lost. So there is a minimum size of device that’s feasible. Equally the cost of larger devices escalates exponentially and, arguably, more electricity can be lost.

“It seems there’s an advantage in keeping things as small as possible, certainly during the R&D process,” said Kingham. “We want to move as quickly as we can, tackle the engineering challenges with relatively small devices, and then scale up later if necessary. Although, we think devices just a few metres across are quite viable as 100MW power plants.”

The actual vessel is made of stainless steel, although more exotic materials would be required for production reactors in order to protect against erosion. Keeping the plasma off the vessel walls requires careful control of the magnetic field pressure and this is provided by the positioning of magnetic coils and the current passed through them. It aims to produce a gap of a few centimetres between the tokomak’s wall and the superheated plasma.

In the device that is currently being built there will be up to 250 million amps in each of the 24 coils and 6 million amps down the centre column.

“The engineering challenge of doing that is very substantial,” said Kingham. “There’s twisting forces and compressive forces on the joints, and you need to get them just right. If you’re trying to pass these currents through a joint between two copper limbs, you don’t want too much extra resistance at those joints or you can have a real problem. You’re getting towards the limits of what you can sensibly do in mechanical engineering.”

More particularly it is getting towards the limits of what can be done with copper as too much energy is wasted on resistive heating, which is why Tokamak Energy is leading research into high-temperature superconductor magnets.

Kingham added: “We’ve actually built one of these small tokamaks with high-temperature superconducting magnets, so we’ve managed to prove you can run the magnets for 29 hours with nice and stable magnetic fields.

“If we put together the high performance of the high-field device with the new magnets then we’ll have something that is potentially capable of producing electricity from fusion for the first time, though we may need to scale up a bit. The timescale for that is 2025. We’d love to find ways of doing it earlier but we’ll need to increase the amount of investment relatively quickly.”

The mechanical engineering in the earlier devices was relatively straightforward and the design effort was contracted out. The initial designs were done on a drawing board. 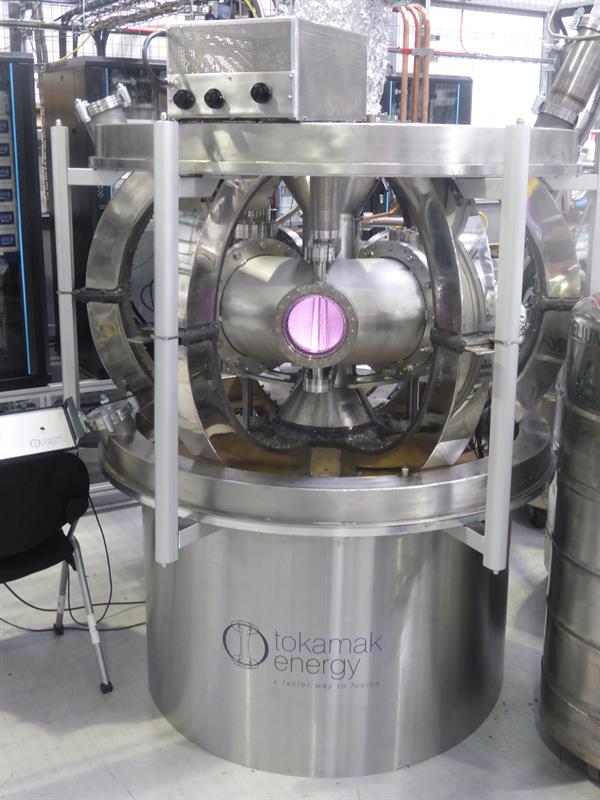 The company has now grown to 30 employees, including five design engineers, and the increasing complexity of the third device, the ST40, has meant that 3D visualisation is important meaning a move to 3D CAD.

Siemens Solid Edge was chosen as the design platform 18 months ago as Paul Tigwell, mechanical design consultant and another recruit from Culham, explained. “Two of us started the same day,” he recalled. “The other engineer had worked with Solid Edge but knew nothing about tokamaks. I didn’t know anything about Solid Edge but I knew tokamaks, so we complemented each other.”

Much of Tigwell’s early work was taking the original drawings and building the 3D models in Solid Edge. This process in itself highlighted the issues and clashes within the design, issues that the first prototype had to address by ‘an engineer with a hammer’ while assembling the device.

One of the features of Solid Edge that appeals to Tigwell is the ability to have ‘alternate assemblies’. This allows the detail to be turned down, so the computer and graphics processors can update the display a lot faster.

Tigwell said: “We’ve got the assembly and an overview. If I bring something new in, it affects both lines, so it’s not two separate models you have to keep updated.”

For modelling the magnetic fields the company is using multi-physics simulation software from ANSYS. There are a number of design engineers working on both the current and next generation prototype, meaning the company is also investing in Team Centre, which comes out of the same Siemens stable as Solid Edge.

“One of the most important parts of Team Centre is that you’ve got a history,” explained Tigwell. “You can interrogate things so much more easily. You don’t have to go and ask people what’s changed or ask, ‘is this the latest version?’

“With Team Centre, you can look at the history and see when parts were changed, who changed it, and what the change was. And, we can attach documents to it, so if one of the physicists gives us a design note, we can attach that. It means we have the history and evolution of the design all contained in one area.”

Tokomak Energy’s approach of getting their hands dirty, and to a certain extent trial and error, is a bold one in such a long term and high cost branch of engineering. But the rewards could be enormous.

“If we could demonstrate high performance in a relatively compact, relatively inexpensive device, that’s a game changer for fusion,” concluded Kingham “Even before we demonstrate really high performance, if we can get close to what tokamaks like JET have done in the past, in something that’s a lot cheaper and quicker, then that really will reset things.”