There are 4.9m tonnes of legacy nuclear waste in the UK, some of it dating back to the 1950s. Dealing with this using current technologies will take 120 years, cost around £234 billion and require technicians in air-fed suits to enter radioactive areas one million times.

The National Centre for Nuclear Robotics (NCNR) is advancing state of the art navigation, sensing, autonomy and human-machine interaction technologies as part of a world-leading programme designed to put human, societal and ethical values front and centre of Britain’s nuclear clean-up task.

The £42 million Centre is led by the University of Birmingham, based at its new Extreme Robotics Lab, in partnership with the universities of Bristol, Lancaster, Edinburgh, Essex, Lincoln, Plymouth, the University of the West of England and Queen Mary University of London.

Professor Rustam Stolkin, director of the NCNR, says: “Part of the reason why we have the legacy waste problem that a lot of other European countries don’t is because a lot of the early reactors were, sadly, for creating weapons material to go into nuclear bombs.

“But the UK pioneered the peaceful use of nuclear energy too, we built the first industrial grade civil nuclear power station for providing electricity.”

The NCNR’s co-director, Professor Tom Scott, adds: “We basically tried all the different flavours of nuclear technology that you can think of, using all the different materials you can think of. Because we were the first to do this in a race with the Americans, French and Russians, all the first reactors were basically prototypes. They weren’t designed with decommissioning or waste management in mind and so the challenges of decommissioning and waste management were an afterthought.

In fact, Sellafield is regarded as being the most hazardous nuclear facility in the western hemisphere. This is in part because of the age of the structures there, but also because of the number of hazardous structures on such a small site. This is a problem Russia and the USA don’t have, due to their land-masses allowing them to have spread out their nuclear facilities.

Nuclear waste comprises a hugely diverse range of objects and materials, engendering a large-scale need for complex robotic manipulations. Nuclear decommissioning therefore offers a critically important market for advanced robotics research, one that is needed now, is of great societal importance, and a technology where the UK is well-placed to take a global lead.

Low-level radioactive waste is sufficiently benign that it can be cleaned up by technicians wearing cumbersome, claustrophobic air-fed suits, and up to seven pairs of protective gloves. They work in challenging environments and are constantly exposed to risk while operating powerful cutting and lifting equipment. Their protective clothing, as well as that of the three or four colleagues who clean down the suits of each technician, leads to the secondary waste paradox, whereby one technician cleaning up one barrel of nuclear waste generates 11 barrels of additional waste which go into long term storage ‘at gigantic cost to the tax payer’. 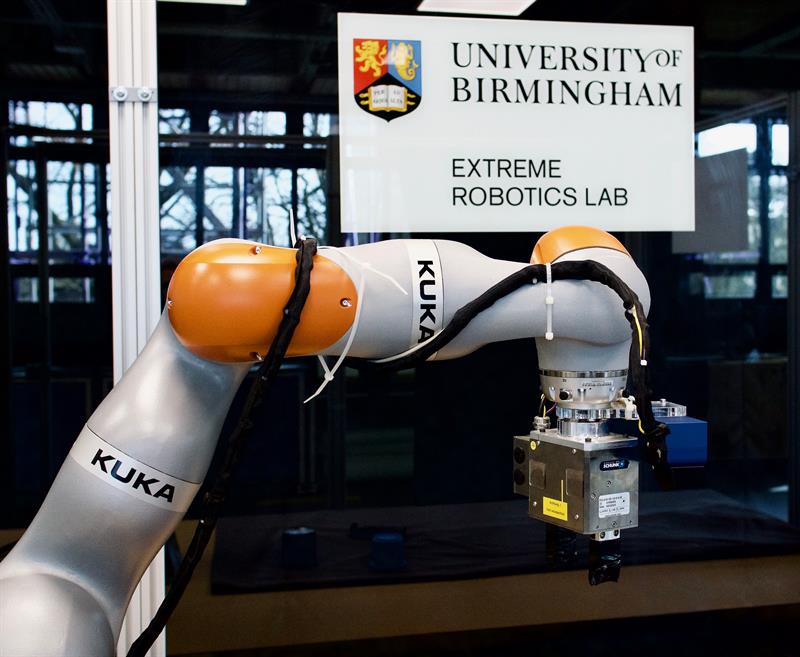 The technicians cleaning up the UK’s legacy waste will have to enter these hazardous radioactive environments an estimated one million times.

“The nuclear industry has an extraordinary safety culture,” says Prof Stolkin. “But when you do something a million times, statistically you expect things to go wrong. It’s hazardous, it’s extremely uncomfortable, the suits fill up with sweat, these people get heat exhaustion, so they can only work for two hours a day.

“We have a moral obligation to stop sending humans into these kinds of unpleasant working conditions, we don’t send children up chimneys any more, it’s not socially acceptable. We also have a duty to the environment and the tax payer to stop that secondary waste.”

On top of this, there is a large amount of waste that is so radioactive that humans can’t go near it and is currently stored behind thick concrete walls, some built nearly 70 years ago.

“The infrastructure that was put in place to house these wastes at the start of their lifetime would be best described as agricultural,” says Professor Scott. “For example, some of the siloes used to store certain medium-level waste were siloes designed to hold grain not radioactive waste. They’ve been in there since the late 1950s, so they’re very close to falling down all on their own.

“So, one of the reasons why we need these robots and technologies is where there is a very keen requirement to retrieve those legacy wastes and safely repackage them and put them into modern facilities that are designed to last 100 years or more so that we can thereby reduce the risk to the UK and European public.”

The only solution to clean up these legacy buildings is remote handling machinery of one kind or another.

“Over the past 40 years we’ve seen a robot revolution in the manufacturing industry,” explains Professor Stolkin. “It looks very high-tech, but those robots are not very smart, they’re simply making blind, pre-programmed, repetitive motions. If you replaced these objects with ones that were a slightly different shape, or if they showed up in a slightly different position, the whole system would break. The reason we’ve been able to have this revolution in manufacturing is because manufacturing is a very structured, constrained and precise environment.”

Nuclear waste comes in all shapes and sizes; therefore, the robots being developed by the NCNR must be able to deal with an almost infinite level of disorder, while also working completely autonomously as a human operating it remotely won’t have the relevant depth perception to work quickly or accurately enough.

The NCNR’s experts have attached novel vision and radiation sensors to the robotic arms that are driven by advanced machine learning algorithms and artificial intelligence (AI). They also need to work in harsh environments, and so also feature self-healing electronics. Driven by around 100,000 lines of AI code, the robots can pick out objects, plan their position, size and shape, plan where and how is best to apply a stable grasp and how to deliver it without crashing into its surroundings or other robots in the vicinity. 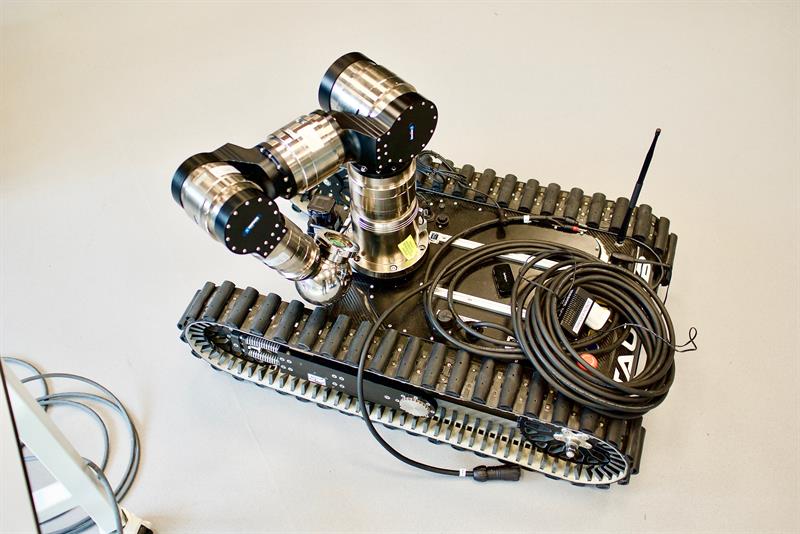 Machine learning and AI is also required for real-time mapping and navigation. Prof Stolkin says: “The robots may need to go into buildings that have been closed off since the 1950s so no one’s quite sure what’s in there.”

Another area being developed by the Queen Mary University of London’s Dr Kaspar Althoefer is ‘soft’ robots. Originally designed for use in keyhole surgery, these balloon-like robots are fitted with sensors or cameras squeezed through an aperture and inflated on the other side to map the environment behind the wall. Some can even be made rigid and can exert force if needed.

“It’s very unusual to have this combination of the absolute frontier of academic research coupled and parallel with very real hands on problem solving, you often get one without the other,” summarises Professor Stolkin. “We have this huge breadth of different technologies and different skills coming together and that interdisciplinarity is very special.

“We’re not just developing new technology, we’re focussed on developing that technology for ethical, moral, societal reasons, environmental stewardship, cleaning up the environment for future generations. I think that makes a powerful motivation for developing these technologies.”

According to Prof Stolkin, working with other industries – whose uptake of advanced technologies is faster than the more cautious nuclear industry – will mature the technologies faster. So, by the time the nuclear industry is ready to adopt them they will be at their most advanced. Plus, the more a technology is used the cheaper it becomes which makes it more attractive to implement.

The current figure of £234bn over 120 years are based on current technologies. If robots were introduced earlier, knocking a year off the prediction, this would in turn reduce the expected cost by £2bn.

Since launching 18 months ago, the National Centre for Nuclear Robotics has had over 100 peer-reviewed papers published, operated the first ever autonomous robot – of any kind – in a live nuclear environment and developed the most sophisticated material recognition system, able to identify 30 different types of plastics, which will also have applications in the domestic recycling industry.

Using simulation to work out the ultimate downhill position for cyclists