Why manufacturers mustn’t lose their green focus in troubled times

When trading conditions worsen, there’s always a worry that businesses will lose sight of their green ideologies as they fight tooth and nail to maintain profitability. The global financial crisis left many manufacturers in the UK and further afield on the brink of collapse, and although the sector’s output has grown in the past few years, turmoil in various international markets means that businesses need to be on their guard.

With the pound being so strong against the euro, it is feared that British manufacturers will find it increasingly tough to compete in Europe, which remains a key market for the UK. The Confederation of British Industry’s (CBI’s) latest Quarterly Industrial Trends Survey - published in late October 2015 - showed that manufacturing production fell during the three months to October, with export orders tumbling at the fastest pace for three years.

Again, businesses cited international political tensions and the stubbornly high value of sterling as their main concerns moving forward. As a natural consequence of unpredictable global trading conditions, manufacturers will need to reassess their investment plans, which could hinder progress even further. The CBI report conformed as much, highlighting a particularly large drop in investment intentions for “training and retraining”.

Rain Newton-Smith, CBI director of economics, commented: “While on balance firms expect orders to stabilise next quarter, it’s disappointing that firms are having to scale back their investment in innovation.

“Over the longer term, strong investment in innovation and skills is vital to boosting our performance in exports, enhancing our manufacturing growth and improving productivity. It’s crucial that government acts decisively to protect spending in these areas as part of the upcoming Comprehensive Spending Review.”

More encouragingly, the latest monthly UK Manufacturing PMI report from Markit and the CIPS revealed that manufacturers are already starting to bounce back. According to the Index, in October the UK recorded its best month of output since June 2014. However, Markit’s senior economist, Rob Dobson, stated that the upturn was mainly due to an improvement in fortunes for the nation’s biggest manufacturers. Meanwhile, small and medium-sized firms continue to struggle.

Why manufacturers MUST continue to invest in energy efficiency

It’s not just production levels and the wider economy that will suffer because of a downturn in manufacturing industry investment; concerns will also be raised about the sector’s impact on climate change.

The UK has set an ambitious target of reducing carbon emissions by 80% by 2050 (based on levels recorded in 1990), and while everybody will need to play their part if this goal is to be achieved, it’s fair to say that the manufacturing industry must shoulder a sizeable chunk of the burden.

Figures provided by the Carbon Trust showed that industry is responsible for 25% of the country’s total CO2 emissions. Meanwhile, official Eurostat figures published in early 2015 indicated that the manufacturing industry is the third biggest emitter of “total ozone precursor emissions” in the EU, accounting for 19% overall. 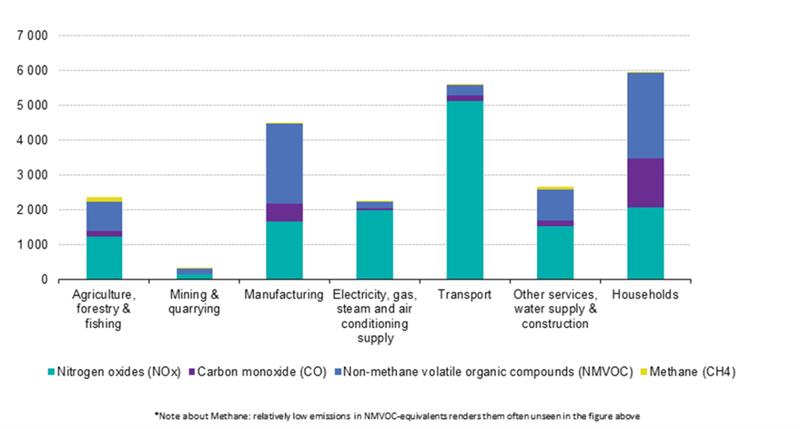 As you can see from the chart, only households and transport (25% and 24% respectively) generate more damaging emissions than the manufacturing sector.

These statistics only serve to emphasise the point that manufacturers simply must take their green responsibilities seriously. Strict regulations, particularly in the vehicle production industry, have been introduced across Europe and it does appear that things are moving in the right direction. That said, the ongoing Eurozone problems, coupled with a controversial review of the EU Emissions Trading System (EU ETS), have sparked fears that high-polluting organisations will be given free rein to damage the environment.

In mid-July, plans to increase industry pollution subsidies to €160bn (£113.2bn) after 2020 were announced in Brussels.

Under the proposals, energy-intensive industries will be given free carbon emission allowances to compensate for the EU’s tightening of climate change regulations. The EU is worried that high-polluting manufacturers may take their operations to other countries that don’t have sufficient carbon emission restraints in place - a process that is known as “carbon leakage”. In essence, by allowing these businesses to manufacture goods without incurring huge costs for carbon emission permits, the EU will be able to keep a closer eye on these organisations.

However, the plans have attracted criticism from green campaigners, who believe the changes could undermine the principles of the EU ETS. Femke de Jong, EU climate policy advisor at Carbon Market Watch, said that a decade after the trading system was launched, it still “lacks the teeth” to drive emission reductions.

“Handing out pollution permits worth hundreds of billions of euros for free on the assumption that other countries will not take similar action is not only damaging the process for a strong climate treaty in Paris, it also ignores that revenues from auctioning these permits could fill public budgets to invest in Europe’s climate-friendly economy,” she commented earlier this year.

As things stand, the UK is on track to meet its climate change targets, but this certainly isn’t a cue for manufacturers to suddenly rest on their laurels.

It’s not just the environmental impact caused by their operations that company bosses need to consider; the cost of running machines and equipment that are inefficient can be sky high. The Competition and Markets Authority recently stated that electricity prices have risen by around 75% in the past decade, while gas prices have increased by 125% over the same period. Rates are not going to fall any time soon either.

According to analysis by the Department of Energy & Climate Change, average industrial electricity prices for medium consumers in the UK (including taxes) were 43% above the EU15 median in the first six months of 2015. When taxes were taken out of the equation, the government body found that electricity prices for medium consumers were an eye-watering 71% above the median - the highest across the EU15. Regardless of why this is happening (a lack of competition in the UK energy markets seems to be the reason that is cited most frequently), it’s clear that UK manufacturers are footing a hefty energy bill, and as such it’s no surprise that improving energy efficiency is at the very top of the agenda for key decision makers throughout the sector.

Indeed, a report published by Siemens suggested that 89% of UK manufacturers discuss energy matters at boardroom level, while 79% insisted that they keep close tabs on energy consumption, and that energy management is a “business-critical” function. In addition to this, around two-thirds of manufacturing businesses now have a senior director whose core remit is to manage energy costs and consumption.

At Neutronic Technologies, we’ve noticed a significant spike in the demand for energy-efficient motors and pumps and we’re finding that customers are increasingly asking about the eco-friendly properties of our products. It’s clear that energy efficiency is a key selling point.

According to the CBI, a lot of organisations are approaching energy efficiency as a business growth opportunity, and as many as 90% of companies are looking to make energy-efficiency investments, which is obviously highly encouraging, especially at a time when overall investment levels are threatening to slide. As with most things, investment is pivotal, and although it’s apparent that many manufacturers have the best intentions to become green, it’s always a worry that eco-friendly investments will fall by the wayside when productivity and profits dip. We need to make sure this doesn’t happen.

Why manufacturers need to take ownership of the plastic problem