At the forefront when it comes to promoting the use of optical metrology is the Advanced Forming Research Centre (AFRC). Based at the University of Strathclyde, the AFRC is a globally-recognised centre of excellence in innovative manufacturing technologies, R&D, and metal forming and forging research.

The AFRC is also one of seven High Value Manufacturing (HVM) Catapult centres in the UK. The centres offer businesses of all sizes and from all sectors access to world-class equipment, expertise and collaborative working opportunities. One of these is optical metrology.

Danny McMahon, senior manufacturing engineer of the metrology & digital manufacturing team at the AFRC, says: “The AFRC’s core focus is on the forming and forging of metals. Often that’s carried out at high temperatures in what would be considered a fairly hostile environment. Being able to capture data within the process at the point of manufacture is very important and allows us to learn so much about the process. So we can apply an optical metrology system to parts like dies and moulds that are at high temperature.”

The AFRC’s approach is to look at an object such as a forging die that is held at a temperature of 250°C. Using an optical system to do this means it is possible to capture a single scan from anywhere between a fraction of a second and a few seconds. In that time the system will capture the full surface within a given volume.

“If we can look at key features on a die within every stroke of the press using this type of system,” says McMahon, “then we can effectively get data comparing each scan of the die and see it break down over time. So we can get intelligence on how that die is wearing, but it also allows us to educate the operator and tell him that this die is wearing by x amount and allow him to make an educated call on when to stop the process.”

The barrier to using optical metrology in such an environment, however, is the effect of heat on the measurement process. With a die that is at 250°C, the optical system needs to have a standoff distance of around 80cm. So that structured light will have to travel an 80cm path from the projector to the component and back again. This inevitably means there is a very severe temperature gradient throughout that path. 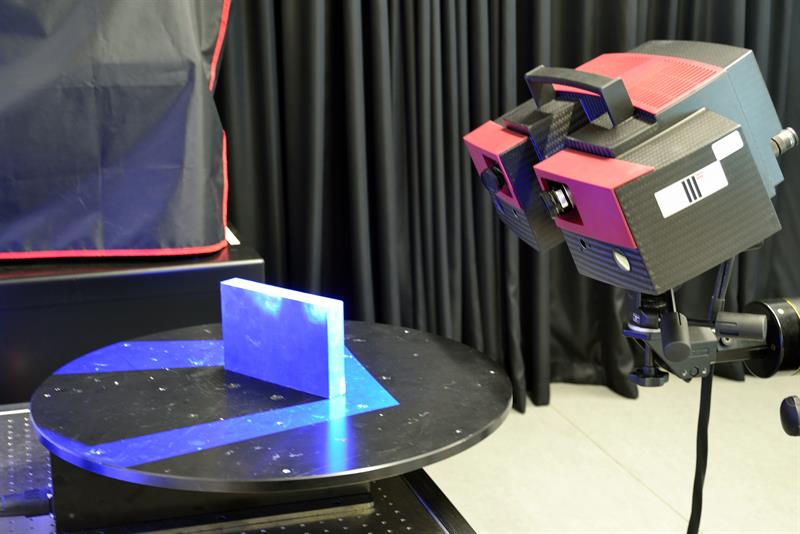 Within a vacuum, light obviously travels in a straight line. However, when it’s travelling through a medium such as air, as the air temperature andthe diffractive index change. This means that it is no longer possible to rely on that light path being a straight line. This, claims McMahon, is why it’s so important to understand the quality of the data you’re getting back and why the AFRC’s capability is so valuable.

He says: “The AFRC has an outstanding modelling and simulation capability. We can simulate the thermal expansion of a complex geometry so that we can understand what’s going on. Measuring it at 20°C is fine – that’s how you would normally measure a die. But when it’s in process it’s going to be severely expanded because it’s at 250°C. So we’re trying to understand what that geometry should be and what we predict it to be and then trying to get scan data to validate that. We started on quite simple samples of straight bars so that the linear thermal expansion measurement was as accurate as it could be. As the geometry gets more complex, predicting the geometry of linear thermal expansion becomes more difficult.”

As well as understanding simple geometries, the AFRC has discovered that when it applies optical metrology to a more complex die shape, it gets back data that looks better than was expected from the original studies.

“We’ve been able to get some quite good data,” says McMahon. “We’ve compared that to our modelling and simulation predictions and take some intelligence from that. So we’re looking to develop that.”

The ability to capture this amount of data about a given part is optical metrology’s great benefit, McMahon believes. He says: “The big benefit of optical systems over contact is that you can very quickly capture the full surface of your part. So it will create a very dense point cloud of the thing you’re trying to manufacture. That gives you a massive amount of intelligence. With contact metrology, you’re basically taking discrete points and then making assumptions of what’s in between those points.” 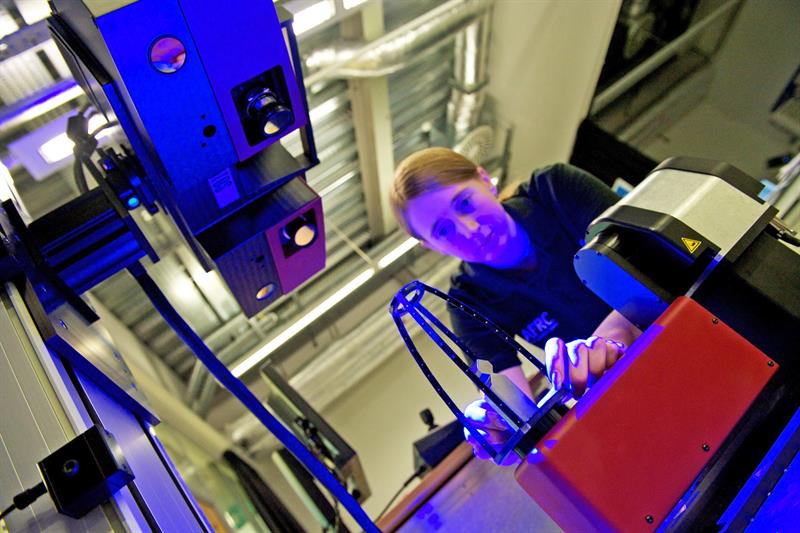 This, he believes, is particularly important as technologies such as 3D printing are changing the nature of designs. “With more freeform surface and freely designed geometry, tactile metrology just isn’t good enough. That’s the way designs are changing.”

Inevitably, this is leading to an increased uptake in optical metrology, led by some very big players in the engineering sector. “I’ve seen aerospace OEMs installing automated versions of these systems,” says McMahon. “That sends a very big message to UK manufacturing that this is an accepted technology. OEMs of that size have a lot of expertise and individuals who know how to get the best out of that data. If you’re an SME, on the other hand, you won’t have that investment in a dedicated metrologist who understands that subject.”

This is where the AFRC comes in. It has a team of metrologists and engineers that SMEs can come and access. It can help SMEs understand them, tell them what considerations need to be taken into account and explain what factors affect them.

Says McMahon: “The most important thing for SMEs to understand is how environmental factors affect them. These are very different to what you would consider for a tactile system. Things like ambient lighting or the colour and surface texture of what you’re measuring will affect the results you get from these systems. Where manufacturers don’t have a dedicated resource, they can access them via the AFRC or other Catapult centres.”

One thing holding the technology back, however, is the lack of an international standard for optical metrology. Normally, SMEs rely on an ISO standard where they don’t have specific resource. Coordinate measuring Machines (CMMs) tend to be covered by ISO 10360, which is a validation of the CMMs working volume. However, the CMM has a fixed working volume, it’s basically a tactile system. It’s quite easy to characterise that operating volume. Optical systems are different in that they don’t actually have a fixed operating volume to characterise. This means it is not possible to adopt an existing standard.

The danger of this, of course, is that companies will struggle to validate the system and then lose confidence in them.