Reach for the sky

The UK needs to move up the ladder from being a component manufacturer to designing entire aircraft systems for future air travel, if it wants to lead the next revolution in aviation. It’s entirely possible, but will require a change in strategic thinking.

Once the world-leader in the development of aviation technologies, the UK is now more likely to be designing new wing and engine components than whole aircraft. It matters because if British industry isn’t involved in shaping the future – and not just the next generation of aircraft but entire systems of air travel – then it won’t be part of the fast-moving currents of momentum, only trailing in their wake.

Catching up will soon be much harder than ever before, because we’re on the brink of a new revolutionary phase in air technologies in the form of digital aviation and the use of autonomous systems: integrated, AI-driven travel.

If the UK isn’t going to be a minor player then there needs to be a shift in attitudes to the role of design. Government policy and industry focus has been on the importance of high-value manufacturing to the positioning of UK businesses in the global market. This, on one level, has been the common sense approach. But on another it’s been a narrowing of attention away from original strengths and principles.

We need to be global leaders in high-value design if we’re to maintain a long-term role in high-value manufacturing. There is also the prospect of eventually losing our involvement with the largest overseas aerospace industry businesses, as the reputation of British engineering begins to fade, too much dependent on the excellence of its specialist, small-scale manufacturing, with no ambition in terms of the bigger picture.

There are going to be major benefits from the arrival of what’s being described as the ‘third revolution’, fifty years on from the major economic and social changes resulting from when technologies like pressurised cabins and gas turbine engines made mass air travel the norm. 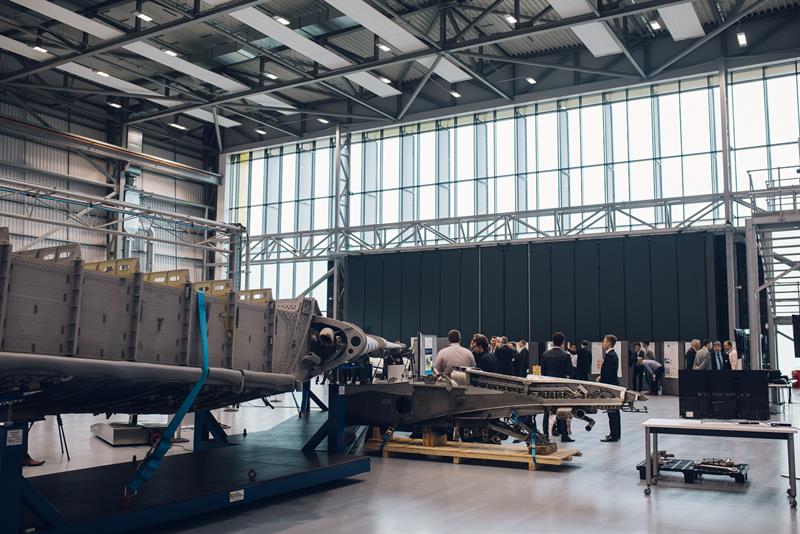 Digital aviation is predicted, by a World Economic Forum report 2017, to lead to a $700 billion saving by 2025 in terms of reduced environmental impacts, higher levels of security and safety and cost savings for customers. The increased profitability of this more efficiently organised autonomous model for the aviation and travel industry as a whole is expected to generate an added $305 billion.

Within the next ten years, there is the potential for the passenger experience to be transformed. Bags can be collected from home by an autonomous vehicle, scanned and checked en route; so by the time you have been transported to the airport (and again, security checks have been made by the vehicle itself), you can walk to the departure lounge, where your option for food and drink is waiting for you.

Any ongoing transport links have already been arranged based on a knowledge of flight times – and there are less likely to be delays anyway, given the level of data-driven airspace management and automated aircraft maintenance.

It’s easy to paint a picture. But in reality, none of these benefits for industry and passengers are guaranteed at this stage. Individual trends of autonomous technologies exist but haven’t been fully tested. We don’t yet know how systems will work together, or where the problems will come from when they’re being used in a messy real-world context, how these types of complex holistic systems will cope with the unexpected.

We don’t know what kinds of alternative and compromise models will be needed to balance the human and the autonomous. Such a data-driven operation is dependent on impeccable information security, as well as widespread international co-operation in the integration of technologies and air travel policies. Environmental benefits will mostly come from the development and mass adoption of electric aircraft.

So we’re back to the importance of high-value design, in everything from the development of third revolution-ready aircraft to autonomous maintenance vehicles, passenger sensors and the data analysis that turns all the noise of complexity into a harmonious operation.

At Cranfield we’re setting ourselves up to be a holistic lab for design, testing and manufacture, acting as the UK’s research airport. Industry funders for the centres include Boeing, Thales, Raytheon, SAAB, Monarch Aircraft Engineering and Aveillant. Alongside facilities like the on-campus airport and smart road for testing autonomous vehicles, there is the Aerospace Integration Research Centre (AIRC).

The Centre’s facilities allow for rapid testing and development of future aircraft and airspace innovations, with the space to work on full-scale aircraft. So, an idea can be taken from the lab to being demonstrated working in the air in a single location.

A current project, for example, is workshops for the Agile Wing integration project, bringing together more than 20 researchers from three institutions to focus on optimising the new design through continuous feedback from the Centre’s tools, monitoring flight performance, test pilot comments and the modified aircraft’s simulated impact on airspace. The real-time design loop means concepts can be tested, modified and retested in a much shorter time period than is typical; in business terms that means the whole process of new development is made more viable and attractive.

The AIRC is to be backed by another new facility currently under development, the £65 million Digital Aviation Research and Technology Centre (DARTeC). Research here will look at the nuts and bolts of the implementation of blue-sky digital aviation thinking: using sensors and their data to improve airport systems, increasing the reliability and availability of aircraft through Artificial Intelligence, and integrating drones into civilian airspace. DARTeC will include virtual air traffic control and next-generation radar technologies, as well as airspace and routes with Civil Aviation Authority-approval.

Given its heritage in aerospace, UK industry should be, and needs to be, much more than a niche partner. That means taking ownership of the third revolution, creating its own models and most of all, starting with big plans for design.

Reach for the stars

Reaching for the sky