<b>If something sounds too good to be true, it probably is. So, when billionaire innovator Elon Musk released a white paper detailing the concept of Hyperloop, it divided opinion. Here, Justin Cunningham voices his concerns about the fledgling technology.</b>

On the whole, the principle behind Hyperloop is well loved by the masses and engineering students. In particular, universities have seized on it as a source of inspiration for young engineers, perhaps in the same way as the moon landings in the 1960s. However, many experts continue to question the technology's practicality.

Rapid travel has, to a certain extent, become normalised in the 21st Century. Aircraft travel in excess of 500mph and trains comfortably cruise at 150mph in the UK and up to 267mph on China’s Shanghai Maglev. But, it seems, this is neither fast enough or efficient enough to meet our future travel needs. Enter Hyperloop, which proposes mass transportation at speeds in excess of 700mph, in sealed steel tubes under partial vacuum using low-energy electric linear motors to provide propulsion.

So, have experts been too quick to write off Hyperloop as pie in the sky, or is ‘taking the Tube’ about to take on a whole new meaning?

“We know we can do this,” says Rob Lloyd, chief executive of Hyperloop One, a start up firm developing Hyperloop technology. Being interviewed at an event set-up by TechCruch he adds: “But, we need routes that make economic sense and governments that are supportive. If regulators block what we are trying to achieve and make it hard for us, we’re just go to another country, as there is interest everywhere.”

Lloyd’s rhetoric would seem to favour those countries that are less prone to drawn out planning disputes, so don’t expect a Hyperloop to be built in the UK or even Europe anytime soon. However, the United Arab Emirates (UAE) has a history of approving more outlandish projects and could well be a forerunner.


Despite Elon Musk lighting the touchpaper of the concept in his preliminary design document in 2012, he has not developed any active business to commercialise Hyperloop technology. Admittedly, he has his hands full with SpaceX and Tesla, but it’s meant developments have been largely free from his, or his engineers, inputs – the people that have garnered a reputation for making the impossible happen.

However, it’s the costs initially outlined by Musk – that at the time prompted so many to sit up with interest – which have drawn the biggest criticisms after being labelled conservative at best and plain ignorant at worst.

A number of economists and transportation experts have openly questioned the $6billion price tag. This, coupled with the aggressive timescale set out by those pursuing commercialisation, has left many expecting the actual cost of designing, developing and constructing an all-new form of transportation to be an order of magnitude higher without serious compromise to the initial concept’s overall vision. There are also many unanswered questions around equipment malfunction, accidents, and emergency evacuations.

Despite the criticism, Hyperloop One continues to outline potential routes and release feasibility studies developed in conjunction with various government regulators and engineering consultancies.

“High speed mass transportation is embraced by governments,” says Lloyd. “The problem is they think the way to do it is high speed rail projects that go on forever. We are trying to rewrite those rules and make something happen in five years that might normally take 20. 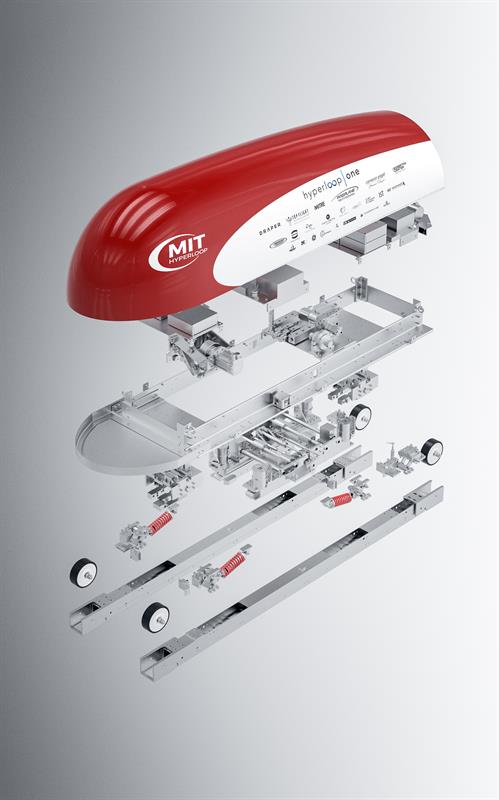 The engineering challenge is immense. While, broadly speaking, the principle has been agreed upon as possible, those that have worked on large transportation infrastructure projects dismiss Hyperloop technology when it comes to its practical implementation.

For starters, the radial thermal expansion of the steel tubes under direct sunlight will result in pipeline distortions between joints. And, over a 100km pipeline, the longitudinal thermal expansion could be as much as 50m, meaning that a huge number of flexible joints would have to be in place. With so many moving joints, over such a distance, all under vacuum: it’s a maintenance nightmare in the making.

Then there are questions about whether the steel is strong enough to withstand normal atmospheric pressure when it’s internal pressure is so drastically reduced. Atmospheric forces acting on the outside of the structure would be around 10 tonnes per square metre, with almost nothing pushing back on the vacuum sealed inner structure. It makes sudden and catastrophic buckling a very real potential hazard. The pipeline would also have to take the vibrational and centrifugal forces of the pods – thought to weigh between 10 and 15 tonnes fully loaded – travelling at close to the speed of sound. The steel pipelines wall thickness will almost certainly need to be greater than the current test pipelines of just 20mm.

A design competition sponsored by SpaceX invited proposals for pod designs that could be propelled inside a pipeline. The response was overwhelming, with around 1200 entries from both university and non-university teams from around the globe. This has since been whittled down to just 27 teams that have advanced to build sub-scale prototypes that were tested earlier this year at SpaceX’s 1.6km long, 1.8m wide, test track facility known as Hypertube, which it built to support (but not endorse) developments in Hyperloop technology.

The Massachusetts Institute of Technology (MIT) was one of the few successful pod’s over the 1.6km track. The pod weighs 250kg and uses a passive magnetic levitation system

that incorporates two arrays of 20 neodymium magnets. At speed, this produces a 15mm levitation gap that eliminates resistance caused by contact with the ground. At lower speeds, wheels are used until sufficient speed is achieved.

The system also has both 24V and 36V Li-ion batteries, has over 30 sensors for monitoring and control, and also operates autonomously.

And, while the MIT pod chose magnetic levitation to decrease resistance, others chose air bearings to provide the same result – near friction free lateral movement such as Carnegie Mellon Hyperloop, from Carnegie Mellon University based in Pittsburgh, USA.

During the Hypertube test runs, the internal pressure was reduced as low as 140Pa down from atmospheric pressure (101325Pa). Unlike the proposed Linear Induction Motors that are being developed for commercial roll out by Hyperloop One, the competition prototypes relied on competitors to provide their own propulsion system or use the in-house ‘pusher’ – a high powered wheeled device that does what it says on the tin – accelerate pods for the first 15% of the track up to several hundred mph.

During testing, many teams suffered from dust ingress and misalignment problems with just three able to complete a run under vacuum. Of these, the Delft University of Technology team earned the highest score overall, the Technical University of Munich won the fastest pod, while MIT placed third overall and won an award for safety and reliability.

Hyperloop One has been conducting its own tests to develop the low-energy propulsion system using Linear Induction Motors.

“We did a propulsion test showcasing the proprietary motor and power electronics systems that accelerated the test sled from zero to 130mph in 2.2s.”

The test sled was on a track, and not in a sealed pipeline under vacuum, but it proved the propulsion system is feasible.

“We have over 40 different subsystems and that is growing quickly,” says Collins. “We’ll soon have a pod that will also test the aerodynamic capabilities inside the pressure induced environment. We are installing the vacuum system now, the welding is underway and the track is being deployed, and once we are ready we’ll do the tests. We’ll soon be able to show the levitation, track guidance, the propulsion system, its electronics and power management systems.”

As every engineer knows, the devil is in the detail. While Hyperloop technology is based on solid scientific principles, the difference between theory and reality will no doubt slow progress.

Despite the difficulties and the criticism, however, it’s done nothing to douse the enthusiasm and hype around Hyperloop technology.

“We are going to be three times more effective than any other transportation system on the ground today,” says Lloyd. “Whether that is three times faster, or greener, or cheaper, that’s the breakthrough that the world is hoping for. I think the market is there to make something very special happening in the next five years.”

For Hyperloop to really work it must combine speed and efficiency. Economics will normally always win out during development and if high-speed autonomous cars or airport queue times can be reduced, it’s hard to see how Hyperloop will compete beyond its novelty. Like Concorde, Hyperloop could well be too far ahead of its time to succeed.

Helping to bring the Hyperloop closer