Braking on the double

In the world of haulage, as in other industries, there is a never ending quest for higher fuel efficiency, lower cost of ownership, greater uptime and reduced maintenance time. As a consequence, extra pressure has been put on the service brakes, Tom Austin-Morgan reports on a powerful new secondary braking system.

Hilko Schmitt, Jacob Vehicle Systems’ (JVS) business development manager, Europe, said: “Since the 1970s there has been an average reduction in fuel consumption of 30% while the average speed of trucks has increased by 30%.”

Modern trucks are heavier and faster, but have smaller engines with lower rpms, better aerodynamics and reduced rolling resistance due to better tyre quality and improved lubricants. So how do you stop the service brakes from overheating or fading?

The latest version of JVS’ compression release engine brake technology, the High Power Density (HPD) Engine Brake for heavy goods vehicles (HGVs), is a secondary braking system that controls the power output of the engine to allow smoother, more controlled slowing of the vehicle. The system can be activated both by the driver, via a lever on the steering column, or the vehicle’s ECU and interfaces with other key systems within the vehicle, including the electronic stability program, adaptive cruise control, road speed limiter, ABS and transmission related functions.

As well as helping increase efficiency over comparable technology, such as driveline retarders, by delivering controlled slowing after the driver takes their foot off the accelerator, the HPD system also helps to control the speed of the vehicle at low speeds, when going downhill for example.

There is significant market potential for JVS’ HPD Engine Brake in Europe, where Jacobs’ compression release engine braking has already been adopted by Daimler, Renault, DAF, Deutz and Volvo. The majority of European trucks still use hydraulic driveline retarders, which are dependent on vehicle speed for effectiveness, and typically weight 175kg. 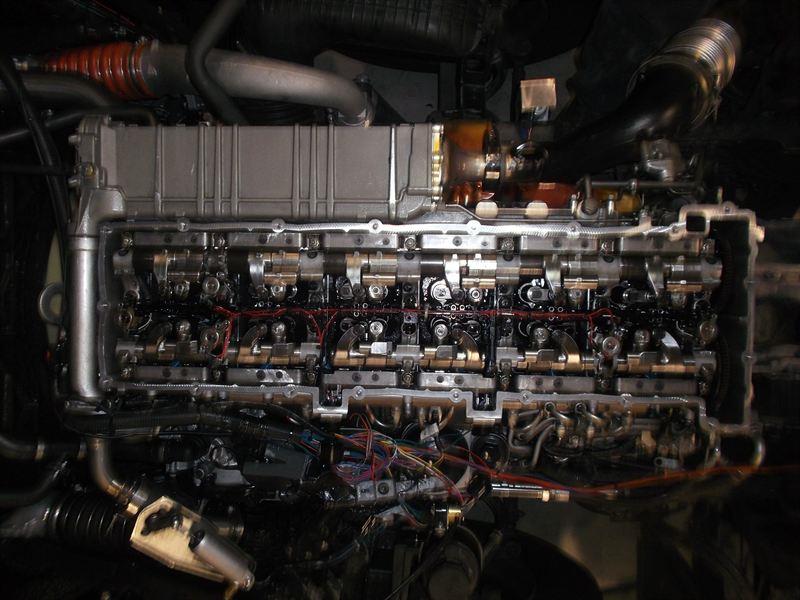 Inside a truck engine fitted with the HPD engine brake

JVS’ system weights just 12kg and its integrated design means that there are no additional cooling requirements as heat escapes through the exhaust instead of the radiator. This in turn reduces the radiator size, lowering the overall weight of the truck, which reduces drag and, ultimately, fuel consumption.

Sergio Sgarbi, president JVS, commented: “The Jacobs HPD Engine Brake can cope with lower speeds, eliminating the need for a driveline retarder and becoming the primary choice in secondary braking.”

As Jacobs’ HPD Engine Brake uses standard components that are neither heavy or expensive, it also offers a cost advantage. JVS says that total cost of ownership will be €3500, a fraction of the price of hydraulic retarder devices, and it delivers an average return on investment in six months compared to two-and-a-half years for hydraulic retarder devices. However, the company could not provide an exact pricing level as that would depend on the individual customers’ engine and the level of integration required.

The HPD Engine Brake achieves the same retarding performance at 1200rpm as previous-generation engine brakes did at 2100rpm. That translates to a 100% increase in engine braking power at cruise speeds. This also means improved slowing times and reduced stopping distances: a heavily-loaded truck can be slowed from 56 to 43mph in 30% less time and distance with reduced brake wear.

“When the piston reaches the top of the stroke, the exhaust valves are opened which allows the hot compressed gas to be released into the exhaust manifold. Some of the energy in the gas is used to drive the turbine of the turbocharger, while the remaining energy is expelled as hot gas through the vehicle exhaust. By making the engine into a two stroke retarding machine, it not only doubles the number of retarding compression events, but also enables the turbocharger to provide higher pressure intake air which increases the amount of compression for each piston stroke, particularly at low engine speeds.”

To achieve this innovative method of getting twice the amount of pressure into the system, the design process is heavily driven by simulation. The design team used GT Power for engine performance simulation, PTC’s Creo for CAD, Ansys for FEA as well as a number of custom programs.

Howell explained: “One big challenge is packaging, because there are multiple components packed in with a lot of pressure in the system. We have to make sure all the components are strong enough to take those stresses and that the level of wear is acceptable, what an acceptable level of contact stress on the camshaft can be, and how good the lubrication is. As this is relatively difficult to gauge we’d move on to a test rig, fatigue rig, hydraulic rig and after all these stages we’d be ready to test a full engine.”

At this stage, the next test is durability; the engines are run non-stop, switching between accelerating and braking every 30s for 25 hours for initial testing on new technologies, 300 hours for production designs. The results of these tests will then be verified by the OEM purchasing the system. Finally, fleet tests will be carried out where the system is installed into actual trucks.

There is growing interest in driverless technology, and HGVs are no exception to this with trials of lorry ‘platooning’ due to take place on stretches of the M6 in 2017, according to The Chancellor of the Exchequer, George Osbourne’s Budget in March 2016. Could the HPD braking system be used in this application? Howell said that the company isn’t looking to implement it into driverless lorries at the moment, however, he added: “There is certainly a benefit for OEMs by doing this. It would better regulate the cruising speed of platooning trucks. Though each system would have to be set up differently to combat the effects of reduced air resistance with successive trucks in the platoon.”

Looking to the future JVS wants to optimise the system further to provide a consistent retarding torque across the entire rpm range. The HPD Engine Braking system should be available in 2017.

Hybrids keep the pressure up