At the beginning of 2019 at the Consumer Electronics Show in Las Vegas, Envisics – a technology company based in Milton Keynes – unveiled a holographic head up display (HUD) platform for vehicles.

The company had been operating in ‘stealth’ for around nine years to perfect its technology. However, its roots go back to Cambridge University, where CEO and founder, Dr Jamieson Christmas undertook a PhD between 2004 and 2009.

“I elected to research holography over a very wide range of different topic areas, but the central project I undertook was my PhD thesis which was to try and make holographic displays a reality, understand the problem and move the needle forward,” he says. “At the time the big hype in the market was going to be pico projectors, everyone assumed your cell phone would be able to project a 30-inch picture on the wall and initially that was my target.”

However, the worldwide financial crash in 2008 meant the Alps Group, a Japanese conglomerate that Dr Christmas was working for, decided it was going to retract its engineering operations from the UK. So, with Alps UK’s president Peter Woodland, he created a company, Two Tree Photonics, around the core technology he pioneered at Cambridge.

“The first thing we did was look at the best place to use this technology. Where should we target it?” Dr Christmas explains. “One area that was relatively stable in the wake of the economic shock was the automotive market because it runs such long schedules. From the start of a concept to producing a vehicle takes five years plus, so, a lot of those vehicle designs were in process and they had to continue. They could sustain the higher price points than the commercial markets and the technology had a really strong application in that space. So, we set about converting the technology into a head up display application and we attracted interest from Jaguar Land Rover.

“We met with Bob Joyce, CTO of JLR at the time, and he said: ‘that’s the technology we want’. So, we partnered back with Alps, we did the design, they did the manufacturing and qualification.” 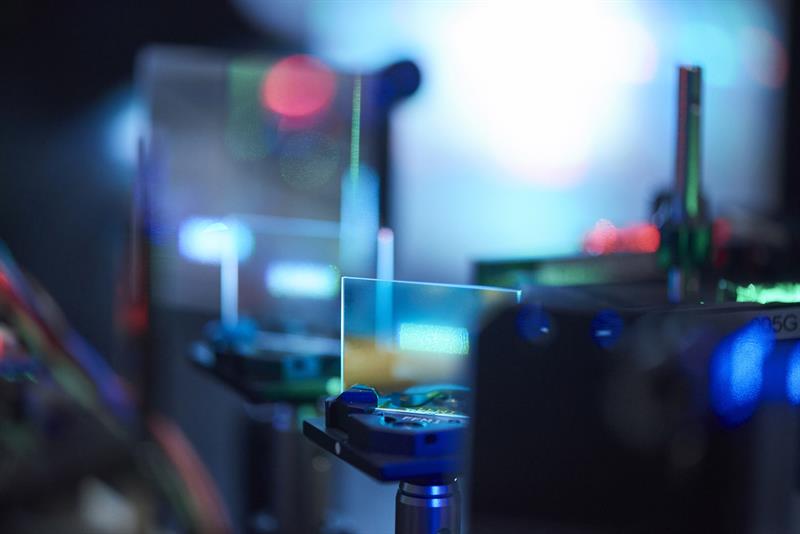 By October 2014 the first units rolled off the production line in Japan and the first JLR models with Two Trees Photonics’ laser holography HUD platforms shipped in 2015. The company received a huge amount of interest as the technology ‘came out of the blue’, leading to a buyout by American West Coast augmented reality company DAQRI in 2016. DAQRI asked Dr Christmas’ team to redesign the platform for smart glasses. But attention from the automotive industry never went away and so in 2018, the companies separated and Envisics was formed.

“We had a booth at CES and invited numerous automotive companies to come and see us. Everybody that saw it was absolutely blown away, hugely impressed. No-one had ever seen anything quite like it: Compact HUD design; large image size; augmented reality; in a vehicle. All the things that traditionally have been very difficult to do, there they were in high quality,” he continues.

“It’s never a straight path. The journey is always the interesting part and we’re on a really exciting journey. It’s just absolutely full on. We have much more interest than we can reasonably deal with. We’re growing the company as quickly as we can to recognise and realise that and it’s really really exciting.”

Envisics now has two offices, one in Milton Keynes that employs 32 people, and one in Detroit employing 13 people, around half of whom are PhDs, expert scientists and engineers.

HUDs in cars are nothing new, BMW for example has had them in some models for several years now. However, existing technologies use LED backlit LCD screens to render images on only one plane and squander more than 90% of the illuminating light available when projecting imagery onto the windscreen because of the pixels opening and closing to let light through from behind. Additionally, this creates heat, which also wastes energy.

Envisics’ Dynamic Holographic Platform is around half the size because it uses just one projector and algorithms that project and redistribute the light precisely where and when it’s needed, wasting no light whatsoever. While consuming half the power, this one projector can also generate multiple planes at different distances, with resolution and clarity six times that of the human retina – day and night; sunny or overcast –the holographic technology means that even if modulator defects occur, image degradation is imperceptible. This technology far exceeds today’s automotive requirements. 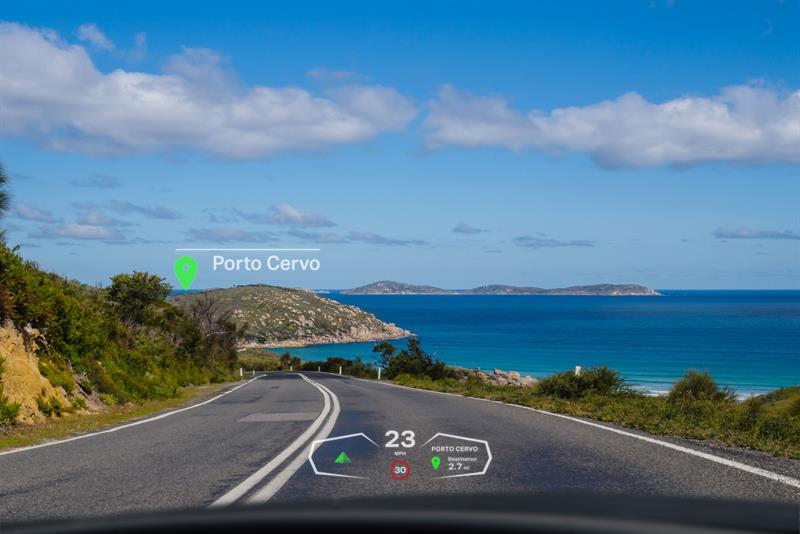 “The maths involved is insane. The device science is even more insane,” Dr Christmas states. “We’ve had to develop a hybrid silicon device that allows us to electronically control the speed of light.

“Everyone says the speed of light is a constant. It kind of is; it’s constant in a vacuum. But you can make light slow down and speed up by changing the density of the medium it’s travelling through,” he explains. “This silicon device is completely unique to us, we’ve developed all the materials science and, believe it or not, it contains 2 million light speed modulators. That really is at the heart of the technology of the company.”

Envisics also developed another chip which is the calculation engine that allows the team to decide what to write on the first device. Dr Christmas says it simulates how light propagates through space.

“Today, that chip performs 150,000 million calculations a second. 150 gigaflops,” he says. “The scale of the problem we’re addressing here is so vast that it’s really quite unique. The net result is, by doing all this maths and making a device that messes with the speed of light, we’re able to create really high-quality images that are significantly beyond the resolution of the human eye. When we talk about retina display on phones – an equivalent space – our images are much higher resolution than those retina display images, and we can project them in multiple dimensions simultaneously.

“The net result is that we can create a much more compact head-up display that is much more efficient, much sharper, much brighter than any other competing technology.” 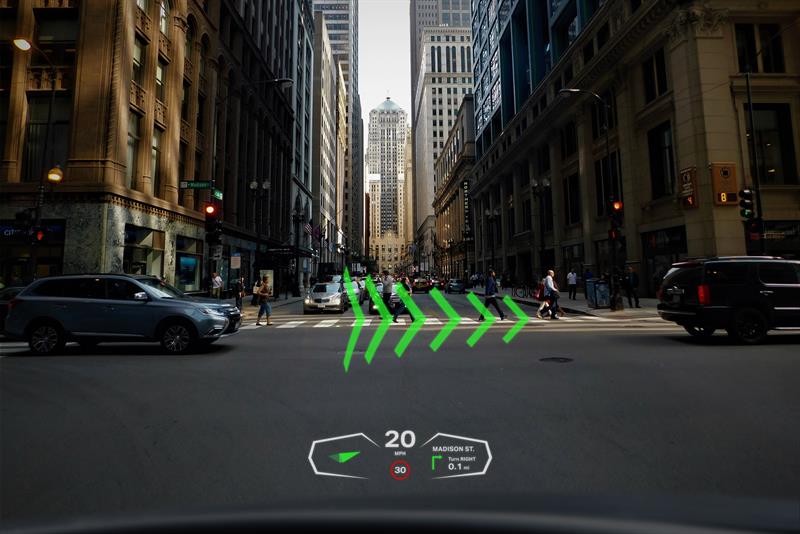 Even with the maths and the device in place, there’s a significant engineering task to then convert these into a product that is applicable to automotive use. An electronic product that goes in the cabin of a car must be guaranteed to work from -40°C to 85°C. Thankfully for Envisics, the automotive industry has gathered mountains of data over the years that pinpoint each criteria that need to be met to meet and exceed these constraints.

“Taking something which is fundamentally new and revolutionary and making it work over these huge extremes of temperature ranges is a very significant undertaking,” says Dr Christmas. “Then, throw into the mix the fact that each windshield is at a different angle and has a different curvature, the available space beneath the dashboard is different. So, you’ve got all of these compound challenges, and you have to meet all the different regulations and specifications for each one.”

For each individual vehicle model, the automaker provides Envisics with CAD data from the vehicle for them to work out where the platform can be installed, how it will be packaged and the angle at which it needs to be projected onto the windscreen (in some cases they’re working to vehicle designs that aren’t even finished yet). Then Envisics, which is the technology provider – not a manufacturer of HUDs – works closely with Tier 1 automotive suppliers to deliver each version of the HUD to market. Dr Christmas says that as long as the rake of the windscreen isn’t 90° to the dashboard, and there’s enough space for the HUD inside the dashboard, it can be configured to project effectively.

Similarly, the interface between the HUD and individual OEM’s in-vehicle software is dealt with by the Tier 1s. 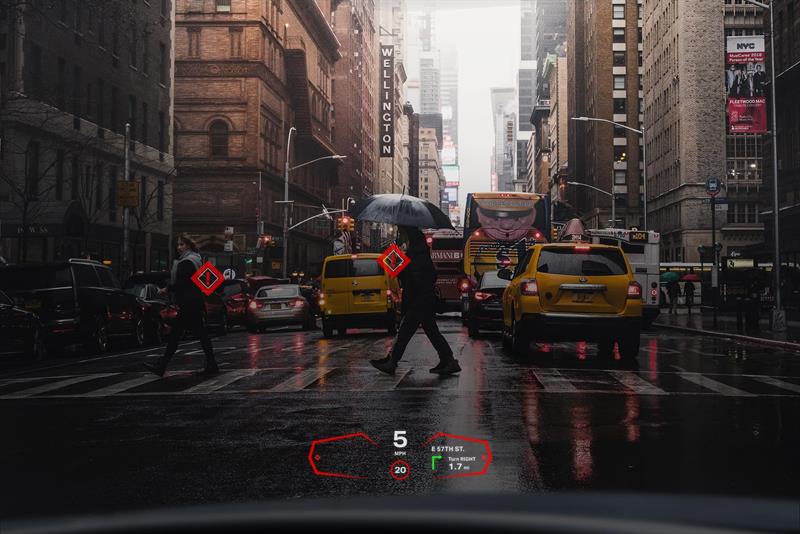 Fundamentally, a HUD is a safety feature that is designed to enhance the driver’s situational awareness. As well as putting driving information, like the speedometer, on the windscreen saving the driver’s eyes from travelling too far from the road, Envisics’ dynamic holography means that the information can be displayed as though it is 2.5 metres in front of the windscreen.

This effect is hard to visualise on the page or even in a video, however experiencing it really is immersive. The driving information does look like it’s floating ahead of the car, saving your eyes those vital split-seconds to refocus where you’re effectively driving blind. Plus, it still allows you to use your peripheral vision around the display rather than driving on memory while looking down to the in-car instrument cluster.

The other thing that being able to project images on multiple planes allows Envisics’ HUD to do is act as an early warning system when it is interfaced with the vehicle’s ADAS system. It can pick out vehicles pulling out of side streets or pedestrians stepping off the pavement and draw the driver’s eye to it by placing a red diamond over the possible hazard.

“This is a very crude, but absolutely real example of how we can orchestrate the driver’s gaze to ensure they’ve picked up on things that are going on around them,” says Dr Christmas. It can also show route information, direct you to points of interest and even allow the OEMs to brand their vehicles in their own way as exterior car designs become more homogenised.

Currently the HUD is being tested on the roads of Detroit. The first vehicles to have the HUD platform built in are expected to be released in 2022. 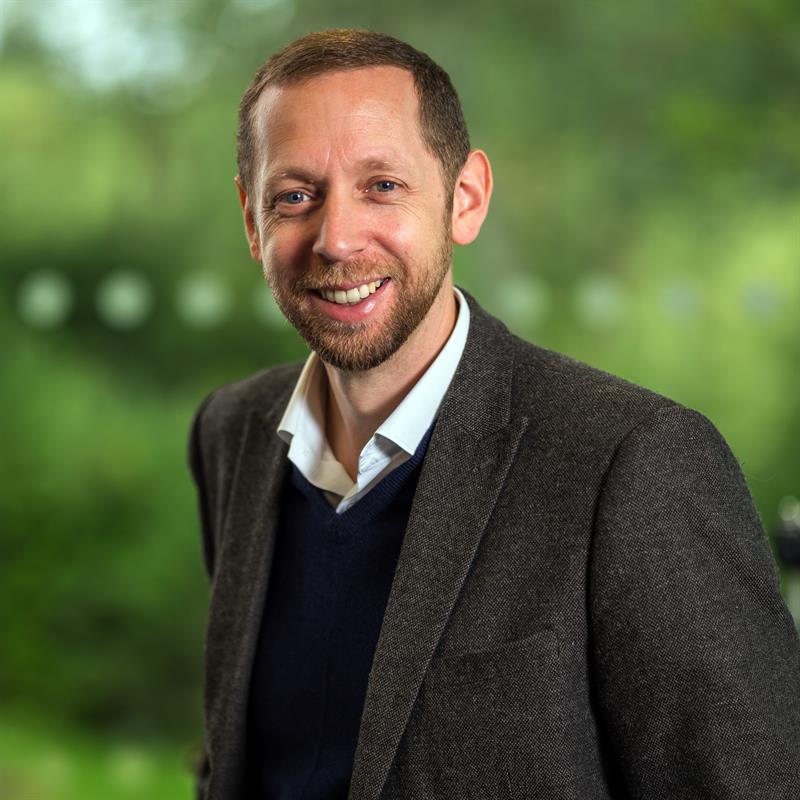 Envisics is currently working on Generation 3 of the platform which Dr Christmas says will be “utterly transformational”.

“We are improving design, power efficiency, brightness and there are many other things that we can work on,” he explains. “The Gen 3 technology will be as capable, but it will be flat like a book. What we’re doing is unlocking more of the holographic potential and using holograms themselves to correct for the distortions in the windshield. That means the mirrors, that take up the most space in the package, will disappear. It will be a completely different design and approach which can fit many more vehicles.”

He is not at liberty to say what kind of vehicles, in what markets, or how the holograms will pre-compensate for distortions in the windscreen because the R&D is ongoing, and IP is constantly being generated. There is a working prototype and he says it has demonstrated that the principles are sound. If things go well, the Gen 3 platform will be on the market by 2025.

The roadmap currently includes a Gen 4 platform that could be used not just in vehicles but in illumination and entertainment. The ultimate example of holograms in entertainment is the Star Wars projections of Princess Leia or maps that float in thin air. Unfortunately, this is probably never going to happen, because a reflective surface is needed to bounce the light towards the viewer. However, there is a workaround.

“The truth is it’s a compute problem, the device science is almost there,” Dr Christmas explains. “It requires a further evolution from Gen 3. If you think 150,000 million calculations per second is a lot, it’s probably 100 times that compute to have full-motion 3D movies.

“Could you have it on the wall, and see Princess Leia standing in front of you? Absolutely. And we’re not a million miles (far, far) away from it.”

Fire suppression company, Plumis has turned the design of fire sprinkler systems on its head

Has ultraviolet light curing finally come of age for adhesives?