The latest development project between CompoTech PLUS and Bilsing Automation (Attendorn, Germany) has produced a new carbon fibre (CF) composite End Of Arm Tooling (EOAT) for an automotive tandem press line using suction cup tooling. This type of EOAT is typically called a gondola beam due to its geometry, having two symmetrical square beams attached to a flat central body. The arms holding the suction cups are attached to the gondola beam by means of tooling nests.

The collaborative project was initiated by a leading automotive body panel producer looking for a custom design alternative gondola beam to replace an existing hybrid aluminium-carbon composite beam. The key objective for the project team was to simplify tooling management by developing a stiffer, longer EOAT that could provide the desired interchangeability of standard suction cup tooling nests throughout the factory.

The new all carbon fibre 2.6 metre long, low profile gondola beam design has enabled highly beneficial standardisation of the One Touch Adaptor (OTA) tooling nests across the factory between the different types of EOAT being used. Consequently, tooling nest assembly times and OTA related maintenance, parts and storage costs have all been halved.

Bilsing Automation is a world leader in automotive stamping and bodyshop EOAT tooling and the development of innovative modular industrial tooling systems. The company has a leading position in automated tooling using carbon composites, collaboratively developed and manufactured by CompoTech. 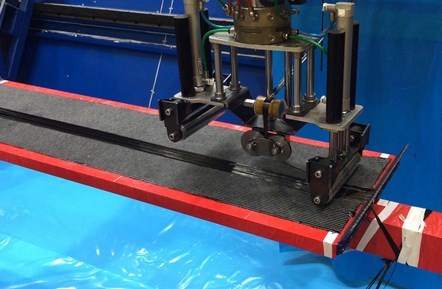 CompoTech developed a new laminate design using two types of carbon fibres to meet the required design parameters for a standardised EOAT for tandem press lines in the factory.  The design specification was based upon actual factory press line generated data. The CF epoxy laminate for each section of the new gondola uses a combination of both PAN fabric and axial pitch fibres, precisely placed where needed using its AFL technology.

The gondola upgrade has an overall width of 2.6m, is required to handle a payload of up to 100kg, and to operate at 2G (~20m/s2) acceleration with minimal deformation, in both vertical and horizontal (perpendicular to beam axis) directions. The low-profile structure minimises press opening, reducing process time, when mounted below a linear axis. Here, the linear motion is a custom 7th axis of the 6-axis tandem feeder robot arms installed on existing press lines. It offers a faster and more efficient panel transfer and extended reach of the 6-axis base robot unit.

Each carbon section uses both unidirectional high modulus axial ‘pitch’ carbon fibres and high strength PAN fibres, with different laminate layup combinations in the top, bottom and sides. Composite pads are bonded at key points along the structural beams and machined to provide a precise surface for the assembly of the EOAT tooling nest. Dynamic load testing of the fully assembled CF gondola confirmed the high stiffness of the laminate system with a maximum deformation of only 4.9mm.

Gabriel Martinot, CompoTech’ lead design engineer explained how they approached the project to meet all the design parameters: “The challenge was to design the gondola with the central part having a similar bending stiffness as the 80mm x 80mm profile beams and avoid areas of stress concentration. UD pitch fibres were to compensate the geometrical loss of stiffness. We created ultra-high modulus carbon fabric preforms for the central body to achieve this. Our AFP process enables us to automatically and precisely stack XN-80 UD pitch fibres on top of the PAN fabric to combine 0 deg. axial ‘pitch’ carbon fibres with a standard +/-45° PAN fabric. This provided the highest stiffness in the central beam exactly where needed.”

Gabriel went on to explain further about the other fabrication stages of the new design carbon composite gondola: “The central body halves and the two square beam sections were all first bonded together and then placed back into the AFL machine, which wound additional 90 deg. carbon fibres to further reinforce where the beam is most loaded. This ensures reliable long term performance under even the heaviest loads and significantly reduces any risk of crack propagation between the gondola sub assembly components.”

The experience gained in machine building and automation, along with the fresh thinking approach CompoTech takes to use its unique automated fibre layup technology to solve design engineering problems, is utilised in other industries such as defence, transport, agriculture, cycling and leisure marine.