Have you got the right hardware?

Are all computers created equal? Is the bare minimum in terms of specifications often, 'good enough?' Or does the performance of the hardware have a direct relationship to the productivity and creativity of the engineers using it? There are four companies who dominate this area in Europe – Dell, HP, Lenovo and Fujitsu – so we asked these questions, along with tips on how to get it right. What should the engineer be specifying when looking at a new workstation.

"Hardware is fundamental," said Sean Young, worldwide product development and AEC (Architecture, Engineering and Construction) segment manager at HP. "Software is something that the users are using all day long and it's completely dependent on the hardware to do its job. So, if the hardware is not properly spec'd, the configuration will be incorrect for the user's needs and that is going to result in either a poor, or slow, experience with the software or at worst major problems with the function."

It was a problem that resulted in a new class of workstations to be created that may look like regular PCs on the outside, but in fact are built to meet the demands of people working within the CAD environment, where the equipment will be used all day long and, with deadlines around every corner, slow performance or downtime cannot be tolerated.

AEC segment manager for Lenovo Tom Salomone explained: "When SolidWorks first started out, a lot of people put their SolidWorks on PCs and they just had too many problems. Typing would be slow. Their graphics wouldn't work right. So SolidWorks went through a certification process where they take the hardware in and test it. They make sure it works with SolidWorks and certify it.

All the major ISVs (independent software vendors) now certify equipment as capable of running their software, and have these certifications in place.

Leigh Schvartz, product manager for high performance computing and workstations at Fujitsu commented: "Each of our products is certified by the CAD companies, ensuring that specific application software is supported by the vendor on our workstations. However, this still allows for plenty of customisation – as the base product model is certified in combination with a professional graphics card.Therefore, if customers want to customise their hardware with regards to CPU, HDD or memory that is not a problem."

But does this mean that engineers, or their IT managers, can look at the 'minimum system requirements' as quoted on the software box and be confident of seamless operation if these requirements are met?

"Minimum hardware requirements can be very misleading," said Scott Hamilton, a precision strategist at Dell. "Software vendors provide these only as a minimum requirement for the software application to function, anything less will not work properly. But these are not recommendations and certainly won't give you good performance. We partner with ISVs to test, certify and optimise professional software on Dell workstations, enabling a stable and reliable platform to create, simulate, visualise and collaborate on designs, speed up workflows and maximise productivity."

As a result of this work, Dell helps potential customers define their unique system configuration using a tool called the Precision Workstation Advisor. Equally HP has the HP Performance Advisor, while Fujitsu positions its machines as good, better and best for each of the popular software packages.

What to look for

"For CAE applications the performance is really about having the most cores; you get 18 cores in a processor in a P900 now, and you get two of those, so you can get 36 actual cores. Intel has a spec now, it's called Hyper Threading and you turn that on, that's equivalent to 72 cores.So that's a lot of cores and lots of threads that can be processed at a desktop level now for people to do analysis quickly."

With all the help available from the hardware companies, finding the right equipment should be straightforward. Design teams can be made up of a diverse range of engineers and designers, some running different applications and there will always be pressures on the IT manager to keep costs within reason. But, as Hamilton summed up, shortcuts don't pay off. "The most common mistake Dell sees is not building a balanced system that meets all of the requirements needed for the applications and workflows. Dell's advice is to consider how the system will be used in all cases and don't sacrifice performance to save a few dollars. Remember all of the components working together provide the best performance. It is much more important to make the user as productive as possible as this will bring many benefits to your company like cost of labour savings, better product design, less costly physical prototyping, faster to market and avoiding costly mistakes." 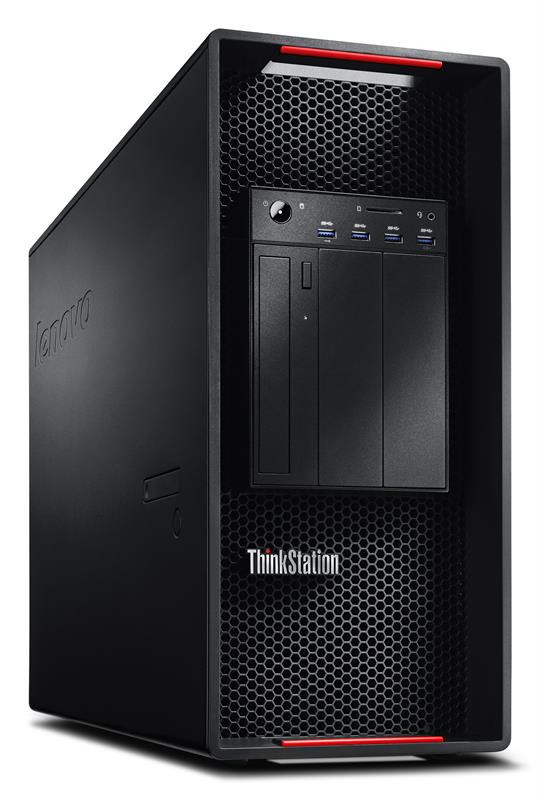 Top of the range at Lenovo is the ThinkStation 900. The power comes from its latest Intel Xeon processors and NVIDIA Quadro graphics cards to provide sufficient performance to run all ISV (independent software vendor) certified applications. The ThinkStation P900 is up to 73% faster than its predecessor, the ThinkStation D30.

The features revolve around flexibility, with storage maximised by allowing up to 14 drives, with redesigned single trays that support 2.5" and 3.5" hard drives. FLEX Bays allow easy 'mix and match', so that only components that are needed are used. These include HDD, ultraslim ODD, 29-in-1 media card readers, and firewires. Thunderbolt 2 adds in cards allowing for faster data transfer. Functionality is increased without sacrificing slots using two innovative FLEX Connectors, supporting SATA/SAS/PCIe storage and advanced RAID solutions.

There are intuitive red touch points to guide the user to quick and easy component changes – even to the motherboard and removable power supply – without a single tool. And a revolutionary tri-channel design and unique air baffle maximises airflow, keeping components cool, quiet, and strong.

The Precision Tower 5810 is claimed by Dell to deliver up to 75% better performance than previous generations for iterative design and prototyping. The power comes from Intel Xeon E5-1600 v3 series processors, NVIDIA Quadro and AMD FirePro graphics.

System memory is expandable up to 256GB using the latest DDR4 RDIMM memory technology. The Dell Precision Tower 5810 delivers up to 5.5x higher graphics performance than previous generations on SolidWorks, 3.7x on CATIA, 5.5x on CREO, 6.8x on MAYA and 3.6x on Siemens NX.

Storage options include the actively cooled PCIe SSD storage solution for fast and reliable content storage - up to 180% faster than traditional SATA SSD storage. A more traditional storage option is the 12Gb/s RAID controllers, doubling the I/O speed of the previous-generation workstation.

Have you got the right spring for your application?