Hollywood has long played off the idea that we could one day live in virtual realities. From Total Recall to The Matrix, the theory is virtual realities will become so believable that it will be impossible to tell what’s real, and what’s not.

Of course, we’re not quite there yet, but virtual reality (VR) is closer than ever. But is this immersive VR experience actually any use to engineers? And is it really going to help produce more innovative products?

CAD software giant Autodesk has been a long-time advocate of VR. It has made VRED (Virtual Reality Editor) available for some time in a move that allows more engineers to access immersive design environments. It even goes so far as to say that VR is the natural evolution of the flat screen, which will allow engineers to experience, rather than view, 3D CAD models.

“VR allows engineers to solve problems by visualising what they’re going to see in the physical world, allowing them to walk around a product and even interact with it,” says Asif Moghal, senior industry manager for manufacturing business strategy and marketing at Autodesk. “Historically, with a 3D model, engineers only do that on a flat screen.”

VR is not, by any means, a new concept to UK industry with active users including Jaguar Land Rover and BAE Systems, which use room-size curved screens known broadly as Cave Automatic Virtual Environments (CAVEs). Here, VR makes sense as it provides the ability to sit in a car to examine the placement of buttons on a new dashboard or the access needed to an engine bay for basic maintenance. But is VR really going to be an engineering tool, used ubiquitously by firms lower in the supply chain, to design parts and components?

“CAD was once very esoteric, reserved only for bigger companies,” says Moghal. “Now, you can get a free CAD system that will run on a tablet. As a result, everybody is doing CAD. VR could well go the same way and I see the potential to use it everywhere.”

Product development and design is already scrutinised, and to some extent experienced, through the virtual world. For many, the hard truth of the matter is that physical resource, and its allocation, is finite. And that can stop or certainly slow innovation by stopping designers effectively iterating. In virtual reality, suddenly, that disappears.

“Running a VR rig is not as big a problem as it was,” says Moghal. “VR was once the dominion of the automotive industry, but it’s started to filter down. We see it as a very big part of how the general manufacturing industry will solve problems more effectively going forward.”

To a certain extent, most design is already carried out in the digital world, so VR is perhaps more of a question about how to interface with design software than smarter resource allocation. So, are we about to witness a mass-exchange of the mouse and screen to VR goggles and haptic gloves?

“The use of the mouse and screen in 3D CAD is not on its way out,” says Moghal. “There are a blend of very different interfaces becoming available, which are likely to continue to develop with VR and augmented reality technologies.”

For the average design office, VR goggles known as HMDs (head-mounted displays) and haptic gloves are a much more practical and affordable option for VR capability compared to implementing a dedicated CAVE facility.

For design engineers, generally, it is not the immersive environment that’s important, however, but how quickly the software is to interact with, for example grabbing and moving an object, selecting a new tool, or zooming in and out. And while there are some early adopters of haptics for design engineers, and things continue to develop quickly, they are unlikely to be an effective or widespread replacement anytime soon. 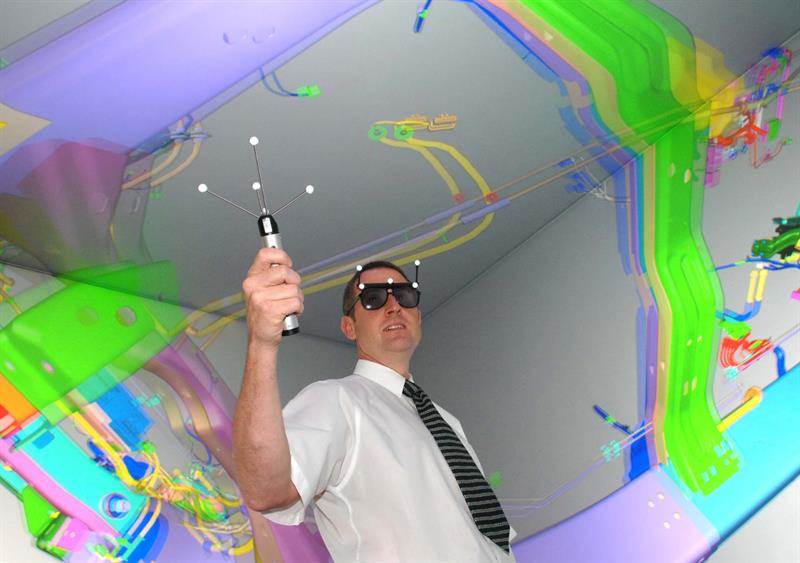 tools. Although initial concept work might sometimes be done as a sketch, its workflow is generally digitised using a combination of Wacom Tablets and CAD workstations.

The company is well known for its ability to leverage 3D printers to produce physical products that help quickly iterate design concepts. So, does it think VR has the potential to reduce its use of 3D printers?

“We develop physical products because we need to know how a mechanism will work, for example,” says Wyn Jones, creative director at Design Reality. “This is where a physical prototype will always be required and people should design with the physical in mind. This is where virtual loses a bit of its selling point.”

Unless you’re a software developer, most project deliverables involve something physical, which is where, to date, the virtual world falls down. Though just about all the major CAD companies have been banging the virtual or digital prototyping drum, there are numerous examples of where the digital domain has not been able to carry over to the physical product.

Formula One team, Virgin Racing, was the first to attempt to develop an F1 car completely digitally using computational fluid dynamics to show just how far the technology had come. Over two seasons and 38 starts, the car failed to score a single point.

“It can be difficult to convey things like scale and proportions, weight, and all those tactile aspects of a product, which is why we like to 3D prototype,” says Jones. “Our designs would not be any good if we didn’t have a 3D printer. That is categorical. From day one we have been using 3D printers. It is the only way to create a modern product. You don’t yet get the feel out of a virtual situation, so I wouldn’t ever have it on a par with 3D printing.”

Of course, there are many examples of where digital prototyping has worked wonders, with well-designed products and their associated development costs being slashed as a result of a zero-physical prototyping approach. On balance, however, it takes a brave engineer, carrying a significant amount of risk, to commit to thousands of pounds worth of tooling without physically prototyping.

“You can easily get surprised in CAD,” says Jones. “As you are zooming in and out all the time, when you 3D print it you realise that you’ve got the scale wrong on a certain part.”

Indeed, part of becoming a good engineer is understanding the physical boundaries and knowing how and when to manipulate them. Knowing how a metal or plastic joint will behave in the real world is different to watching it fail on a simulation. In this respect, VR has got to more closely replicate the physical world, and not try and replace it, if it is to be successful.

“If you put on a VR headset you can visualise something in 3D, but it’s like watching a 3D film vs a 2D film,” says Jones. “For me, it is not immersive enough as it is essentially only getting one of your senses. And for the designer, how does that improve their efficiency or creativity?”

Like all new tools, VR is still finding its place in the world of design engineering, but its trump card is surely its potential to promote collaboration among designers, engineers, suppliers and even customers.

For all its uses, 3D CAD modelling has long been criticised for the isolated nature users design within. Though there have been numerous attempts for promoting more collaboration, from giant multi-user tablets to Facebook style status updates, fundamentally developing geometry and inputting a design concept in to a CAD model is a lonely job.

Perhaps one of the strongest cases for individual VR rigs becoming more prevalent in design offices around the UK would be to allow a more collaborative design process.

Globalisation has meant that design is often carried out in multiple sites, involving multiple engineers that never actually meet. An engineer involved in manufacture in China might deal with an engineer from the UK and client in the US. Correspondence takes the form of a weekly phone call, regular emails and perhaps the occasional Skype chat.

While the cost reductions makes any financial director think this is a smart business move, any engineer will tell you about a hard to define qualitative loss in ideas, creativity and problem solving that results from having more remote and removed ways of working. Having engineers in the same room, working on a common goal, with access to manufacturing halls to better understand how designs will be fabricated, produces a ‘greater than the sum of the parts’ benefit. Does VR have the ability to restore this?

“I can totally see these capabilities being developed, where engineers put on VR goggles and suddenly appear in cyberspace,” says Moghal. “That opens all kinds of collaboration potential, with the supply chain and even customers. By sharing the design process with them you’ll start to understand their values and build an amazing level of customer experience and loyalty. What if you could design your own Aston Martin or iPod. It has the power to help fully personalise, not just the product, but also the experience.” 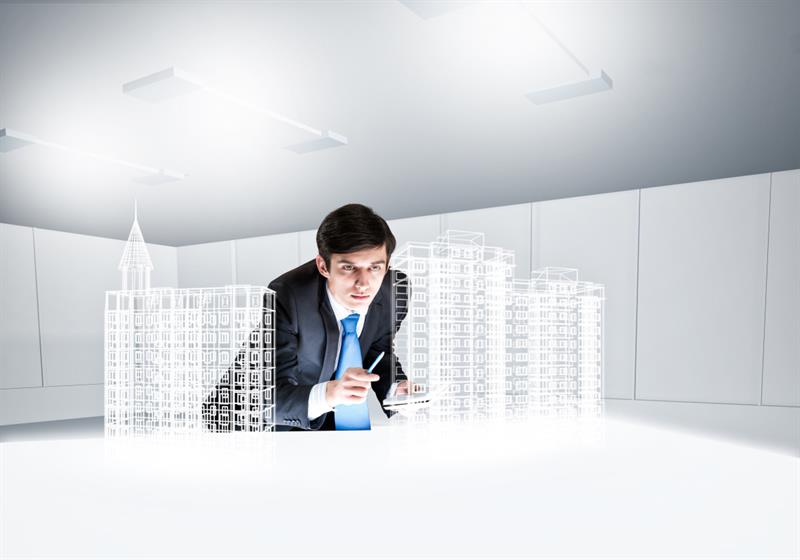 VR’s big advantage is visualisation and collaboration. While tools such as Wacom tablets are finding favour during the sketch and concept phase of a design and engineering project, VR’s place could well be its ability to bring innovators together in a collaborative design environment, that enables them to see and understand data and designs like never before.

“It is a tool and you have to find its place,” says Jones. “If we were looking at 20 concepts then the cost of prototyping them all would be quite high. If I could do that virtually with the client and then narrow it down to four or five, which we then physically 3D print, that could work.”

The other, more abstract, ability of VR is to provide suppliers and customers with an ‘experience’ of a product or service. Could the next stage of collaborative design be driven by customers – perhaps the enabler to mass-customisation? It is entirely possible.

And, let’s not forget, these technologies will entice the next generation, which increasingly expect to be able to visualise problems and designs in this way. They will drive these technologies further than ever thought possible. So, if the thought of engineers donning a pair of goggles seems far-fetched, then you’re probably not the generation demanding them.

Reach for the stars

Virtual reality is finding a multitude of uses, but how effective is it at generating revenue?

It IS rocket science

When it comes to 3D printing, 3D Systems can say it’s been there from the beginning and is maintaining its head start