Theoretically, a customer could design - or at least customise - and order a car, and then come and pick up the completed, built from scratch vehicle 12 hours later. It sounds impossible, but Local Motors is demonstrating that it is not far from reality.

“We can bring vehicles or other complex mechanical devices to market at about five times faster and about one-hundredth of the cost,” claimed chief strategy officer Justin Fishkin. “We exist to shape the future.”

When forward thinkers claim the future of engineering is digital, it is such projects as American outfit Local Motors that demonstrate the future is very much here already.

Fishkin said: “The vision is, you’ll walk into one of our facilities, walk up to the screen, choose your body, choose your power train, your tyres, your wheels, your colours, your technologies. Maybe choose what sensors you want if you’re a little bit more of the technophile. Then we print and you come back the next day and pick it up.”

Two years ago it took 180 hours to print the car initially, three months after it took 44 hours and now it’s down to 20. As stated above, the target is 12 hours.

At which point it is probably worth taking a step back – we are talking about 3D printing a road safe car. Local Motors, claimed Fishkin, has “the unrivalled capacity to make the improbable come to life, and if we can inspire people by bringing them into that process, then we’re able to rapidly innovate and rapidly bring to market new technologies.” He stresses that Local Motors are innovators and manufacturers, whereas most innovators aren’t very good at mass manufacturing, and most mass manufacturers are not that good at innovating.

Local Motors started looking at the car as it such a complex system – typically over 20,000 components per vehicle. What is more these components, sourced typically from as many as 500 suppliers, can come for all parts of the world to an assembly facility which then ships the finished product, sometimes globally. It’s a $2trillion industry that includes a huge amount of logistics and necessitates vast inventories – that are often not fully exhausted - of both components and finished product. There is a huge amount of transportation and pollution even before the car hits the road.

It is the digital environment, right back to the Solid Edge CAD that the cars are designed in that allows a fundamental shift in the manufacturing strategy.

Fishkin explained: “As we went back to the drawing board, thinking through how to define this company and what was going to make us different, we said we’re not ever going to be able to compete with 100 years of scale manufacturing but the way we looked at it was, what would Henry Ford have done differently if the Internet existed when he founded the company? If you can fix the complexity of the system, you can fix everything.So our first 3D printed car has 50 components. We think of it as an ‘appsessory’ where you’re just assembling the technology, you’re printing to the technology and then you’re assembling the technology.”

That technology is also upgradeable – hardware upgradeable as Local Motors term it. As soon as a better battery or sensors or anything else is released the customer can bring it in and the new off-the-shelf components integrated. The only non-interchangeable part is the ‘unibody’, the 3D printed chassis.

Printing the unibody, with its honeycomb structure, was not something that could be done on a standard 3D printer, so Local Motors partnered with Oak Ridge National Laboratory and a company called Cincinnati who modified its BAAM – Big Area Additive Manufacturing – machine to be able to manufacture Local Motor’s first car, the Strati. Strati, the world’s first 3D printed car, is a low speed electric vehicle, which is legal in the US for operation at under 35mph.

“We have other machine partners now, including Cincinnati, and we’re iterating on machines in our own micro-factories using this crowd-powered business model that we have,” said Fishkin. “So our next move is to bring additive and subtractive into one machine as opposed to two separate machines. Thermwood is currently our main partner on the subtractive or milling side. For Olli, it’s about a third first degree 3D printing and then a third second degree 3D printing, meaning we print the moulds. It’s critical to understand that a big part of the cost in producing a vehicle is in the tooling, and if you can rapidly produce new tooling, that’s important.”

Olli, a collaborative project with IBM Watson, is a 12 seater autonomous public transport vehicle that has had 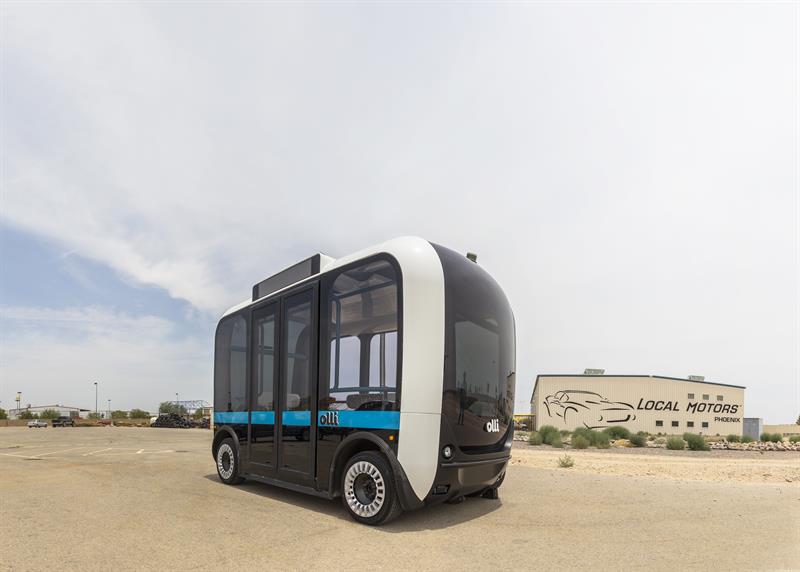 successful trials in Las Vegas and Copenhagen. In terms of securing a place in the pioneering stage of autonomous vehicles, Olli is worth an article in its own right, but in the context of this article one of the things that makes it remarkable was the speed of development. Fishkin said: “We started on this project three months ago.And that doesn’t mean we made a prototype.It took us three months from people saying it’s not possible to crowd-sourcing the design and engineering of it, to doing it.We’ve sold our first ten Ollis. SolidEdge is the front door. The work we’re doing allows us as a community to integrate the new technologies a lot more quickly today.”

Early customers for Olli will include theme parks, university campuses, corporate campuses, and ports, because there’s a ‘logistics Olli’ for handling packages.

There are two parts of the Local Motors business - co-creation and micro-manufacturing.Co-creation involves people who are not direct employees but get paid if their ideas are used. Fishkin said: “Most of them don’t participate because they’re looking to make money. Most of them participate because they’re a 23 year old student and they have a great idea, or they’ve just retired and they have great skills, or sometimes it’s just peer review or recognition. On the second side, micro-manufacturing, we can make 3000 units a year in microfactories that are about the size of an American grocery store, about 50,000 square feet.”

So is this a maker movement for cars? “We think we’re more like the first industrial scale use case for industry 4.0 for digital manufacturing,” claimed Fishkin “Yes, we are using a community globally of people who might have in the past been in a garage cranking on their car.We provided a digital channel for them to do that and also get compensated for doing it.I think we’re more about open source, co-creation and we’re really trying to change things on an industrial scale.”