When he describes what happens at his site, Trevor Lawrence, the operations director of Cranfield Ordnance Test and Evaluation Centre (COTEC) reflects: “Now I think about it, it doesn’t sound like a proper job, does it? It’s more like playing.”

If it is playing, however, it’s with very dangerous toys. Because COTEC – as its name suggests – is a place where testing of ordnance and weapons systems goes way beyond the theoretical. Or, as Lawrence more pithily puts it: “Everything that involves blowing things up or shooting things.”

Situated on Salisbury Plain, it was originally a UK Ministry of Defence Proof and Experimental Establishment (P&EE). Its range included provision for artillery Vertical Recovery. This was the vertical firing and subsequent recovery of projectiles used as carriers for fuses or components which, because the projectiles retain their nose-up attitude throughout flight and landed on soft chalk, were not damaged by impact.

The vertical firing technique was also used for empty proof and strength of design firings or as a means of being able to “listen” to proximity or electronic fuses over long times of flight in a relatively electronically quiet area. This heritage is maintained in the COTEC crest, which shows three orthogonal representations of a vertical firing gun.

According to Lawrence: “It’s not something we do anymore – although we do receive enquiries about it. I don’t even know how you would begin to do a risk assessment on something like that nowadays – clearly things are much more dangerous now than they used to be.” 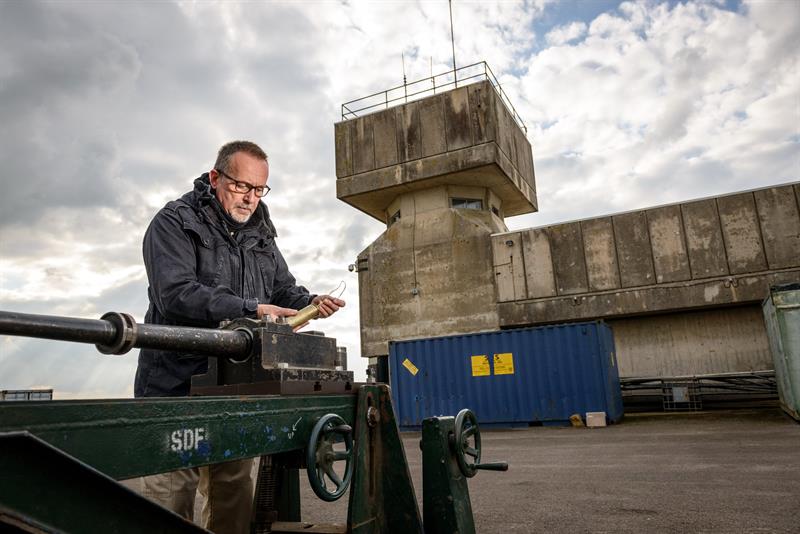 In the late 1980s, however, electronic fuses for artillery shells were adopted, replacing the mechanical fuses. Technology superseded the requirement, which meant that the MoD decided that it no longer had any need for the site. However, Cranfield University, which had been involved in some of the research, saw an opportunity to take over the running of the site to carry out research. The outcome of this was that in 1995, the site was taken over by Cranfield University.

Since then, COTEC has had to develop a very different business model. The original idea was for the site to be somewhere to undertake pure research – both post-graduate and MoD-related. However, as time has gone on, more and more work has come from defence contractors. Today, in fact, such work makes up around a third of the site’s activities, with another 30% each devoted to MoD testing and research respectively. 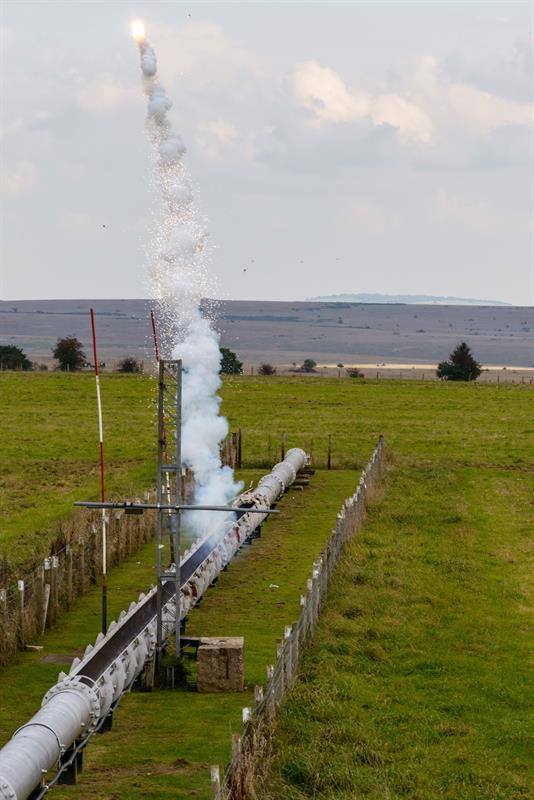 In terms of the form much of its work takes, Lawrence says: “In the simplest possible terms, there are a number of statutory qualification tests that explosives and munitions have to undergo in order to receive their classification, so we do a lot of work in that area. Most of our work is around vulnerability. We are mostly concerned with making explosives and munitions as safe as possible – right up to the point where you don’t want them to be safe anymore.”

With this in mind, COTEC does a great deal of work on trying to reduce the sensitivity of explosive compounds – making sure that when things are stored, transported and used, they are as safe and inert as possible until they get to ‘the business end’.

This ranges from small-scale testing of new explosive formulations – where COTEC tests their response to being heated rapidly or slowly, being dropped or struck – right the way up to looking at complete weapon systems – including guided weapons. “We will impact them with high-velocity fragments to see how well they will react to being hit by an exploding shell or mortar; we will fire bullets into them; we will put them on top of a big, hydrocarbon fire to simulate what happens if they’re involved in a transport accident – or we will drop them from 25 metres,” says Lawrence.

The major challenge at COTEC is, of course, safety. “We’re trying to replicate accident scenarios,” says Lawrence. “The unpredictability of the results represents the greatest threat, since, as Lawrence points out “If we knew exactly what the ordnance was going to do, we wouldn’t need to do the test.”

Today, this is approached in a very methodical fashion, as Lawrence explains. “Historically, it’s been a case of let’s hit it and see what happens. What we’re trying to do now is understand the science behind what’s going on. So, we’re creating small-scale trials in order to build mathematical models and that sort of thing. We need to analyse why things are going to do the things they do and then we can accurately predict what they are going to do and devise ways to prevent problems.”

Such an approach, of course, places considerable strain on the equipment used to perform such experiments. According to Lawrence: “One of the biggest problems we have is that by their nature these are very violent events. The stimulus that we’re putting in is very violent and the response is obviously violent. That means that it’s very hard to capture data when something that violent happens. Our instrumentation has to be incredibly robust. So, for instance, where we’re using high-speed photography, we’re into the hundreds of thousands of frames per second just to try to capture what’s going on. That means you have an extremely expensive camera that you have to somehow protect from that very violent event.”

This requires a considerable amount of engineering expertise. Lawrence outlines one such example, saying: “One thing we use a lot is a very powerful flash X-ray system because X-rays are good for seeing what’s going on inside an explosion since they’re not affected by the large amount of flash like cameras. But the more expensive the piece of equipment you have, the harder you have to work to protect it.”

This is no mean feat from an engineering point of view. Fortunately, COTEC has extensive engineering workshops both on site and at its site at Shrivenham, so a lot of work goes into designing the trial arena and designing the necessary protection. 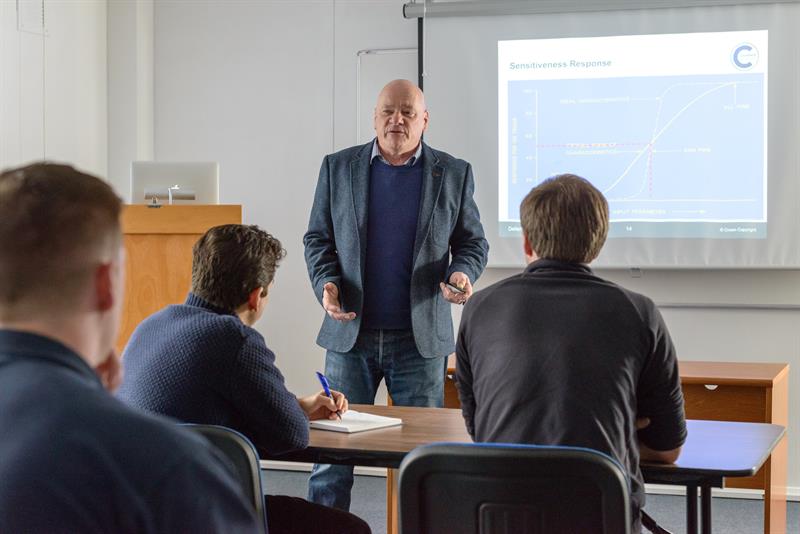 One problem is that it has traditionally been difficult to find specific training for people to work with explosives in this way. Generally, his recruits have come via the military for obvious reasons, but more recently, COTEC has taken on apprentices from non-military backgrounds.

Says Lawrence: “My instrumentation guys have to have a science and technical background, but for a long time there’s been nowhere you can go to learn this stuff. Although, having said that, they have just started a degree in Swansea on which I’m sending a couple of apprentices this year that is the first one in the country that’s actually going to teach this stuff.”

This course is in Ordnance, Munitions and Explosives and is a five-year part-time degree. “I’m hoping to start an apprentice on his five-year journey to a BEng,” says Lawrence.

In terms of projects, Lawrence must necessarily be somewhat guarded, but concedes that one area in which COTEC has made a great deal of progress is in armour protection for vehicles. “We’re doing quite a number of projects at the moment,” says Lawrence, “But what we’ve done quite a lot of is work on armour protection. That’s a particular interest of mine, as I did my Master’s thesis on reactive armour. When Afghanistan was at its height we were doing a lot of work on how to protect vehicles from large blasts – particularly from underneath. Because of course there’s a massive engineering problem there, since you have to find the balance between enough armour to protect it and not reducing mobility and making it more of a target.”

This is an ongoing project and, while he cannot say too much about it he does admit that the research is looking at novel materials – moving away from the more traditional hardened steel plate. 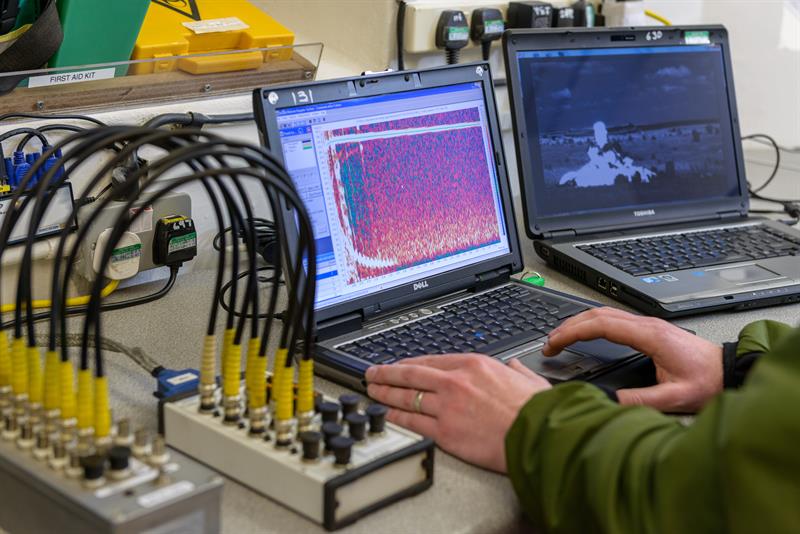 Ultimately, though, for all the talk of ‘playing’, it is sobering to remember that COTEC’s work has very significant real-world consequences and saves lives. With this in mind, it is perhaps useful to conclude with its research into side armour for armoured vehicles.

“For years now, we’ve been putting explosive reactive armour on tanks,” says Lawrence. “The problem with that is that it is great at depleting a shaped charge missile but can cause a lot of damage to troops nearby. I’ve been working on trying to find a system where we can replace the armoured steel plates with lighter, more frangible materials that will give the same amount of protection, but not be a threat to the troops nearby. We’re certainly having some interesting results there.”

These kind of ‘interesting results’ are what save lives and they are at the core of COTEC’s mission.

Nuclear materials race is on!